Home » Art » Literary » All About the Artists 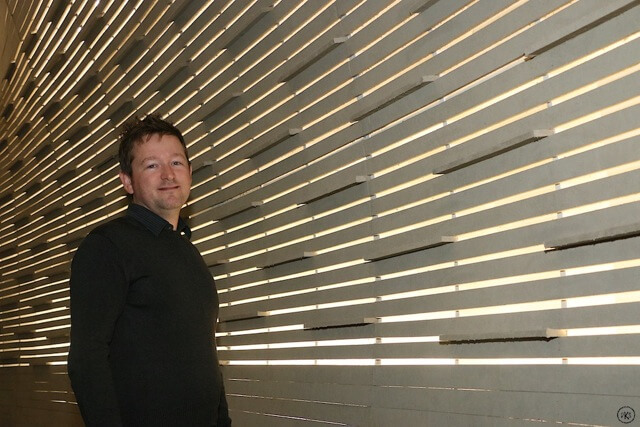 On the job less than six months, and working in concert with two new senior staff whose hiring preceded his arrival, new Executive Director Chris Cook is launching the Bemis Center for Contemporary Arts into a year of experimentation from every angle—programmatically, curatorially and institutionally.

Cook comes to Bemis with a background that is diverse in both geography and subject matter.  His first position after graduate school at the Art Institute of Chicago was as curator at the Sioux City Art Center.  After four years there, he moved to another curatorial position at the Kemper Museum of Art in Kansas City, and then in 2009 he became Executive Director and Curator at Salina Art Center in Kansas.

Prior to his arrival at Bemis, Cook headed the arts organization Cannonball in Miami which emerged from a strategic planning and rebranding process offering residencies, grants, commissions for new works and partnerships with other Miami arts organizations.

Likewise, Cook describes Bemis as an “organization that takes being artist-centric as a core value.”  For Cook, it’s not so much a matter of where artists come from—or what kind of work they make—but of what artists as a community need, and of the kinds of organizations and programs that fulfill these needs.

When it comes to artist residencies—the centerpiece of the Bemis mission since its founding in 1981–the venue will be reaching out to artists in a variety of ways over the course of 2016.

In addition to two cohorts of its traditional open-call residency—one that started last month and one that will arrive in June—Bemis will be hosting two other residencies, one in the spring that is medium-specific and one in fall 2016 that is topic-specific.

The first is an interesting addition conceived by Artistic Director of Residency Programs Ellie Kevorkian.  Lasting from April 28 to May 10 and called “Liveness is Critical,” this short residency will invite performance-based artists to Bemis for dialogue about contemporary performance. Bemis’s fall thematic residency will be on the topic “Sci-Fi and the Human Condition.”  This is the second of Bemis’s forays into the world of thematic residencies.  The first was 2015’s “The Future of Food,” which was also accompanied by an exhibition, “Power of People, Power of Place,” by the Los Angeles-based collective Fallen Fruit.

Cook and his two artistic directors are casting a wide, interdisciplinary net with this year’s residency, as suggested by the latter’s call for artists whose work deals with “magical realism, dystopian and utopian futures, robots, alternate timelines, transhumanism and bodily transformation, space opera, afrofuturism, [or] futuristic identity as explored by costume and dress,” just to name a few of sci-fi’s possible applications.

Inspired in part by the work of the innovative and sometimes controversial sci-fi writer Samuel Delany, this residency is particularly intended to attract artists for whom the tools of science fiction are useful in exploring themes of race, class, sexuality, and the mind/body continuum.

As if to set the stage for the fall’s multidisciplinary conversation among residents, and to establish continuity with residents past, Bemis will be exploring science fiction on the exhibition front as well in Time and Space:  Futures.  This summer show will bring together work by Bemis alumni that similarly reflects an interest in science fiction and “futurist impulses.” Time and Space is actually a two-part exhibition that celebrates Bemis’s thirty-five years of supporting artists. Part one, Beginnings, is one of three exhibitions opening this week.

Beginnings juxtaposes works by past residents—as well as two of Bemis’s founders, Jun Kaneko and Tony Hepburn—alongside photographs and other materials documenting the organization’s early days, when it was known as Alternative Worksite and catered in particular to artists who worked in clay and industrial materials.

It is interesting to note how, over the course of thirty-five years, Bemis has evolved from an “alternative” worksite to one that offers time, space, and conversation to artists from around the world.

As a practicing artist from the west coast, Kevorkian says she is now seeing how the program’s reputation translates into a flood of worthwhile applications from deserving artists. “Bemis exists at the level of global conversation,” she says.

The two other shows opening on February 4 in addition to Time and Space:  Beginnings are solo shows conceived primarily by Artistic Director of Exhibitions and Public Engagement Nicole Caruth.

The first features Derrick Adams, a New York-based artist whose incredibly diverse artistic output ventures into, and brings together, photography, sculpture, video, performance, and even works on paper.

For his Bemis exhibition, Adams will set up a variation on the “radio station” project that he has exhibited in other cities.  In the Omaha iteration, entitled Crossroads: A Social Sculpture, the radio equipment will be connected to an “interactive game board” that will respond to requests made by the public as they walk on the board.

A diagram of Crossroads can be found on Bemis’s website.  The occupant of the disc jockey’s chair will also change over the course of the exhibition, allowing local artists of various kinds and the general public to make the piece a true crossroads.

Also opening on February 4 is a modest but evocative piece of video art entitled “A Third Version of the Imaginary” by Benjamin Tiven. Throughout his career, Tiven has explored issues of history, visual technology, and language as they play out in various national contexts.  “A Third Version of the Imaginary” focuses on Kenya, where Tiven worked in 2012 as a teacher of video editing.

Tiven was allowed to visit the archives of the Kenya Broadcasting Corporation in Nairobi, and what he found were rows and rows of old videotapes, each accompanied by a document listing not just what government events and activities did appear on the tapes but also what had been erased to make the video cassettes reusable.

The events in “Third Version” (low-key as they are) unfold over the course of an existential narration about the ambiguous role of the “image” both as a concept in Kenyan culture and a word in its official language, Swahili.  The ordinary but crucial work performed by a lone technician in this piece may be difficult for anyone born in the age of the smart phone to understand.

Bemis patrons can also anticipate a special Juried Group Exhibition that opens June 16, 2016 that awarded 11 artists who participated in last years’ Benefit Auction. Artists had to submit their artwork via SlideRoom during the open call for the auction, and live within a 100-mile radius of Omaha.

As part of this year of exploration, Bemis has for the moment put the brakes on certain aspects of its programming. The most notable of these is the residency program housed at the Carver Bank building at 24th and Lake Streets in North Omaha.

Bemis has struggled to integrate Carver into its overall mission since the satellite space opened in March 2013, and attendance at Carver events suggests that there is a lot of room to grow when it comes to connecting with North Omaha residents.

Yet, new leadership is anxious to retool Carver to increase its vitality. Figuring out the next steps for Carver is a top priority for Caruth who points to this experiment in urban redevelopment through art as one of the reasons she was attracted by the opportunity to work at Bemis.

Expanding its educational goals is also high on Bemis’ priority list. Caruth would like to strengthen cooperation with Omaha Public Schools and see more kids taking in what the organization has to offer.  Kevorkian wants to explore teaching opportunities for artists, although she is cautious about overburdening the artists who come to Omaha in search of unstructured creative time.  “Artists are often made complicit with administrative goals,” Kevorkian notes.

Cook is also quick to emphasize that Bemis is not a service organization in the same way that Miami’s Cannonball is, but he is eager to spend time on the ground in Omaha’s arts scene and explore whatever possibilities might make a positive difference in this particular pocket of the arts ecosystem.

“It’s our responsibility to understand what artists’ needs are,” Cook emphasizes, “and how we, as an organization with a mission to support artists, can support them in imaginative and unexpected ways.”

What Bemis has in store for 2016 is indeed imaginative and unexpected, and Omaha’s arts community has good reason to be optimistic about how the organization will be evolving in the months and years ahead.