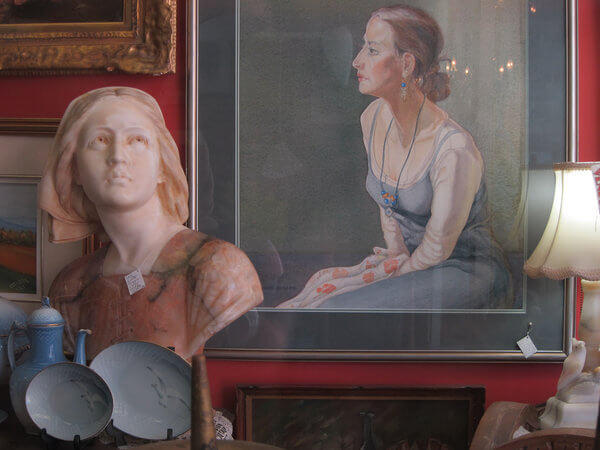 When Mexican artist Humberto Chavez says, “I don’t believe in reality,” he’s not merely being coy. He is being true to his muse and his roots.

Like many artists, Chavez is simply saying that objective reality doesn’t exist. Yet reality for him is more than just a philosophical conundrum of perception; you know, the one about the tree falling in the woods?

Nor does he entirely plug into the North American credo: “Life is what you make it.” For an artist, there is an a priori step. Just as significant as its creation, life or reality for Chavez, is what you imagine it to be.

His latest “imaginings,” 23 color photographs, are currently on display through June 10 at the Garden of the Zodiac in the Old Market Passageway. Sponsored by the Moving Gallery of the Old Omaha Association, this self-curated exhibit, Instructions to cross a street, is his first in several years.

Ostensibly, the show’s imagery traces a personal route taken by the artist during travels in 2013, focusing on four frequently traversed streets in Montreal, Quebec and Omaha as well as views from a hospital room and his studio in Mexico City.

Chavez began the project as an exploration of the arbitrary nature of habit replete with photos, a video and a diary during a three-month period, but no doubt a recent illness and convalescence that interrupted his sojourn played a vital part in the musings of this photo manual of instructions.

The photos themselves are shot mainly through storefront windows with the odd exceptions of his surgical scars and studio wall that remind the viewer of the axiom regarding “best-laid plans.” The series includes two images of very ordinary homes in Omaha that also seems at odds with his playful sauntering and perhaps that’s his point. Maybe their isolated anonymity houses inhabitants waiting for instructions to open their minds as well as their front doors and cross the street on a journey of their own.

According to his show statement, Chavez received his own set of “instructions” from the late French author Georges Perec, for whom fixed constraints of language, or in this case, locale, allowed him to expose a new perspective on familiar relationships.

Whether writing or photographing, a new reality is created through these strategies: First, observation and immersion into everyday experience; second, personalization and identification; formulating an artificial structure to the experience that allows for fourth; multiple interpretations and points of view.

In this way, Chavez’s series of images serve less as a personal narrative and more “as a conceptual framework for finding transformative magic in unassuming rituals.” In other words, he lets his imagination take him down four separate streets with the same attitude expressed by the recently deceased Latin American author Gabriel Garcia Marquez, who believed that no writer should begin each day knowing where he was going—either with his art or his life, presumably. “There is a lot of magical realism in Mexico,” Marquez has said.

As a researcher at the National Institute of the Fine Arts in Mexico City, as well as an author himself specializing in photography and semiotics, Chavez understands how the illusion of reality is “greater” than reality itself. To that end he sets the stage for this exhibit with his manipulative set piece, “Scandale,” that entices the viewer, who first sees the image through Zodiac’s storefront window.

The title of this 2D/3D mx of female portrait and mannequin may be deceptive, but not its intent—to lure one into the gallery via its “Alice through the looking glass” illusion. After all, who can’t resist a scandal? Or, for that matter, an adventure in unexplored territory.

Once in the gallery, the viewer is treated less to a scandal and more to a montage of glances that cleverly fix “broken” boulevards in three separate cities into a single street of fantasy and familiarity. “Broken” because like the “Accidental Tourist,” Chavez says he constructs a manual of instructions in order “to feel normal in a strange place.”

He also ironically refers to his manual of coping as “broken” because his instructions break with a reality either imposed upon one or one not to be trusted. By devising his own instructions, he can thus create his own meaning, his own art, his own way. It’s a lesson for anyone who considers art as a way of life and not a hobby.

Thus Chavez’s photographs reveal not an aimless wanderer but a visual poet not unlike Wordsworth and Thoreau but in a different time, space and medium. Like the latter, once forearmed with his manual of instructions, he is “master of all I survey, my right there none to dispute.” And as with the former, Chavez’s visual poetry is “the spontaneous overflow of emotions recollected in tranquility.”

Which is to say that, despite devising his own method of photographing reality through a reflective looking glass or any other contrivance, as well as a lens, the “meaning” was often only revealed later in the process of viewing multiple images rather than just one. Perhaps what it revealed most to him is that photographs—and a few well-chosen interviews with storeowners intended for his next book—are his way of connecting to the world.

As with most exhibits conceptual in nature, it can be said that the whole is often greater than the sum of its parts. This was true of past installations by Chavez in Omaha, most notably Tiempo Muerto at the Bemis Center in 2005, and it’s true also for Instructions to cross a street.

Consequently several of the 23 images here may strike the viewer as rather pedestrian. Considering that the exhibit is not destination or object-oriented, “pedestrian” rather fits his variation on “a walk in the woods.”

Even the most ordinary photos are the product of his seeing, inquiring and inventing a comfort zone that is part real, part magical. The net result as seen here illustrates a holistic point of view no matter how fragmentary or arbitrary a world we live in. We only need to learn how to navigate it.

“To cross the street,” Chavez says, “would mean to go over the imaginary route of a person who organizes the experience of a walk from different cities. In fact, it’s a continuous street that goes through time and space and forms a single block…[through] a screen of memories.”

Certain works in the show speak more effectively and eloquently regarding Chavez’s “screen of memories,” which he symbolizes through multiple layers of reflection and alternative perspectives. This is especially true of the striking “Theatre du nouveau monde” in Montreal and the playful “El vaquero importa” shot in Omaha.

The former is notable for its twisted hall of mirrors, startling red palette and upside-down perspective that transforms a restroom into a kaleidoscopic theater of its own. The latter pokes fun at a billboard in Omaha’s Breck Apt. building that pictures three cowboys and reads “El Vaquero Imports.” Like the Marlboro Man, yet another commercialization of the Western male macho image.

Perhaps this exhibit’s signature piece is the complex “(Ext.) Krieghoff” taken in a gallery in Quebec featuring Cornelius Krieghoff’s painting “Le Bateau a glace.” Yet, as with this show’s introductory work, “Scandale,” this image is layered in meaning, this time with both reflections of wall sconces behind the photographer and a shadowy one of himself taking the photo.

Obviously, Krieghoff had his own vision for his four men in a sailboat at sea, but what we see here is what Chavez saw and photographed. Overall, it reinforces the concept that no single idea or object was ever made in a vacuum, or exists in an isolation of time and space. Everything we know and accomplish is done so through filters of memory and the imagination. They are a vital set of instructions to any path one takes, crosses or creates.

nstructions to cross a street continues through June 10 at The Garden of the Zodiac Gallery, 1024 Howard St. in the Old Market Passageway. For more information, contact 402.517.8719 or vmercer3@cox.net