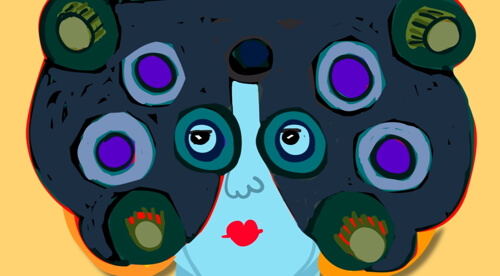 Omaha-based trio, the AniMutts, export thirteen animations and twelve digital prints for Art in Motion at Gallery 72, creating a tense experience between the physical and digital.

The AniMutts – Rebecca Hermann, Peggy Reinecke, and Tom Sain – are artists and educators who have been collaborating since the 90’s. They self-identify as “traditional artists” yet they have taught each other and/or learned digital animation software as an extension of their personal and group practices.

In 2005 they began meeting at each other’s studios in order to build group drawings and capture their process through a stop-motion camera. Together they have amassed a library of stills and video of the making process and the development of a work.

Each artist then takes the digital stills and video and, depending on personal aesthetic preferences, manipulates the digital files into a video animation. These video animations and stills are brought together to make a final video or vignette through layering and further collaboration.

For the AniMutts’ first exhibition at Gallery 72, gallery owner John Rogers describes this as an opportunity to “explore digitally delivered art,” along with “expanding the exploration of animation as fine art.”

Rogers goes on to say that it is “incumbent of galleries to show the digital” and educate the public that “yes, this is Art”. It is invigorating to hear Rogers talk vibrantly about his passion for digital art and ways in which this exhibition explores various methods of display for digital art.

Flanking both walls of the darkened Vinton Street gallery are two juxtaposing series of stills. One, titled “Making Time Duet” on the East wall, is a mix between Christopher Wool and Carroll Dunham. Filled with aggressive black markings on a white background, these prints are eye-grabbing with alternating figure-ground relationships.

The other is the trio suite titled “eye-tudes” which has supersaturated figurative cutouts filled with digital collage and digital paintbrush techniques. Adjacent to these prints the actual “Art in Motion” is on view.

Slickly displayed on iPad’s are ten psychotropic stop-motion animations. Sensations in these animations range from a feeling of “this is your brain on drugs,” to calm and meditative oscillation. Each animation of various lengths unfolds as sketches for the larger (longer and physically bigger) animations and prints displayed throughout the gallery.

“eye-tudes: the DVD” is displayed on a large flatscreen TV mounted on the North wall painted an intentional digital grey. The animation, featuring similar motifs and formats to the previous iPads, has a grey cardboard frame with unrelated and questionable cutout leaves and squiggles, attached at random.

Concluding the exhibition, two projectors animate the back alcove and again show the gallery’s attempt to show multiple methods of display. Surrounding “Marking Time: the DVD”, the largest projected animation on the West wall, is another cutesy grey painted frame.

With controlled yet seemingly haphazard roller marks, the frame looks like something ripped from the DIY “arts” section of Pinterest. Congruent to the frame surrounding “eye-tudes: the DVD”, this frame acts as an over the top distraction to the video animation – stealing attention from the very work it is meant to frame.

The exhibition is titled Art in Motion yet over half the space and half the work is not “in motion”. There is instead a cacophony of stills (the name implies a lack of motion). Some unsuccessfully framed, others directly adhered to the gallery walls and others made into pillows.

According to the AniMutts, their animations are “moving paintings and/or paintings in motion.” This, along with the emphasis on being “traditional artists”, could be evidence in understanding why so many prints are included.

The AniMutts say that the prints are another way to see the animations and that it is “like going from analog (original drawings) to digital (photographs) then from digital (animations) to analog (prints/stills). More importantly, however, there is an overwhelming sense that these prints were actually included to fill the gallery space. Understanding that prints will 1. probably sell easier and 2. take up a lot more space than a tiny iPad Mini.

The AniMutts animations, and the process by which they were created, are so tightly related to sequencing, it is shocking to find such a chasm of a missed opportunity in seeing the actual gallery space as a sequenced (curated) experience.

Unlike the animations, which carefully combine aesthetics, points of views and processes, all of the work in the gallery is seemingly placed willy-nilly. Convenience outweighs a deliberate spatial experience. With complicated rather than complimentary juxtapositions, the exhibition is stuck buffering through the minutiae while simultaneously ignoring the very topic listed in the title: Art in Motion.

As with most digitally created files, the final export is an inevitable make or break moment. Files can be lost/never rendered, exported incorrectly, or exported blissfully.

This exhibition is the final export, and the AniMutts are lost in digital purgatory where re-export, exported animations disengage the physical (in-real-life) experience as animation.

The actual videos are great. The actual prints are great. But the forced experience of both in an exhibition titled “Art in Motion” is well… still spooling.

Art in Motion: Animations by the AniMutts is on view through June 13 at Gallery 72 located at 1806 Vinton Street.