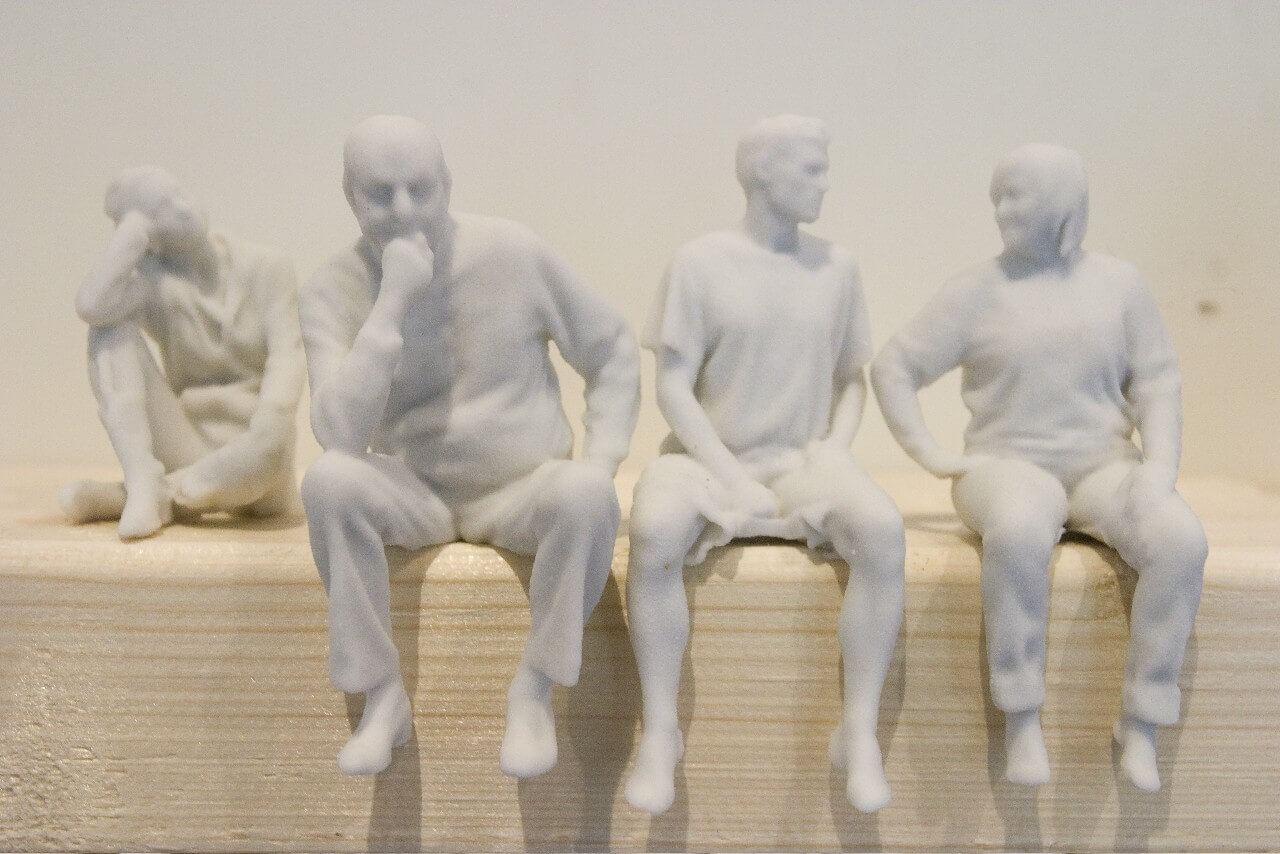 Larry Roots and his gallery, Modern Arts Midtown, seem to suffer from an embarrassment of riches.  With new and inventive work by the highly regarded “vermin” sculptor Jamie Burmeister at its heart, the current exhibition on view at the gallery until August 30 devotes the rest of the revolving spaces to a smorgasbord of work by other artists, some being shown by a gallery for the first time.

More about this diverse crew later.  As for the work of Burmeister, this show puts the “vermin”—the four-inch human figures in various positions and materials that he has been making for the last several years—to new and interesting uses, facilitated by new technology—specifically, 3-D printing.

Whereas earlier renditions of the vermin had something of the prehistoric about them—simple clay figurines that one could imagine being unearthed from a tomb—these new vermin are much more precisely drawn.  The work takes up the challenge of specificity and in so doing moves away from its totemic past and becomes representational, and as diverse in its representations as modern society requires.

One side of the gallery features a narrow wooden shelf on which, by my count, fifty-six of the figurines are spread out in various groupings that beg to be interpreted—a man proselytizes to a stranger while a bystander with a bat approaches, a man and a woman are digging for buried treasure, a small crowd is staring at the huge heart being painted by their tiny colleagues on the wall above them.  What are all of these figures doing, and how are they related to one another?

Meanwhile, on the other side of the gallery, Burmeister has wall-mounted six zoetropes, replicas of nineteenth-century viewing devices that create the “illusion” of motion by showing a series of visual representations in rapid succession—or rather, in as rapid a succession as the viewer would like, since the speed is determined by a crank that the viewer turns.

In the zoetrope works, it is the vermin, very particularly posed, who illustrate comically familiar activities such as clapping hands and swatting away a fly.  Burmeister takes this fascination with gradual, comical variations to an entertaining extreme in the piece “Chicken Dance,” which lives up to its name, complete with incessant polka music.  There are also large sculptures in the gallery’s outdoor space that depict vermin exploring, or being trapped by, large web-like metal structures.

The experience of Burmeister’s work is mutually enriched by the other works in the show.  They include seventeen sculptures by Iggy Sumnik.  The more precise and analytical works, such as the “tablet” series, are grouped together while other, more whimsical pieces such as “Hybrid Totem” are scattered throughout the gallery in much the way that Burmeister’s vermin have been placed across the globe.

Also featured in the show is painter Lynn Piper, whose ten canvases demonstrate a lively sense of pattern and color that is belied by the demonic expressions on the faces of the figures who populate her sensual spaces—such as the man who supposedly just ate a toucan.

Work of a decidedly different flavor is to be found in the rear gallery in the work of artists Scott Blake and Ben Pratt.  Blake’s series of thirty-two acrylics on canvas, entitled “I am what I eat,” depicts the actual bar codes that he has copied from food labels, as explained by the list of thirty-two food products provided with the paintings.

In careful paintings of Popsicles, a wall outlet, and even a series of bullet holes, Ben Pratt seeks, in the words of his artist statement, to “satisfy my want for simpler surroundings.”  This goal is marvelously achieved—from the obscure shade of blue in the background of the Popsicle paintings to the careful demarcation of the shadow that each Popsicle casts across its own stick.  I was reminded of Wayne Thiebaud’s cake paintings, although the sense of pure image is more notable in Pratt’s quiet work.

A third gallery becomes the opportunity for another juxtaposition of artists with similar styles, if not similar goals.  Both Paul Chelstad and Jordan Weber are of the appropriationist school; each artist crams their images with multiple cultural references, from Spongebob Squarepants in one of Weber’s large canvases to the Olympic figure skater Kristi Yamaguchi in one of Chelstad’s works.

But whereas Weber sees his work as a commentary on “massive material consumption,” Chelstad’s works are ink-jet reproductions of pages from New York Diaries, a series of cut-and-paste and stenciled notebooks in which, over time, he developed a private vocabulary achieved by way of the familiar.  Both Chelstad and Weber have given us works that, through the vividness of their imagery and the sparks generated by the juxtapositions, verge on being celebrations of the very culture they are intended to critique or escape.

There are engaging works on view from other artists—Troy Muller, Tom Rierden, Colin Smith—participating in this raucous conversation.  For this viewer, the most exciting discovery in this show are the four canvases by Brian P. Gennardo.  They are lively examples of pictorial exploration, with the hints of an iconography (doors, windows, his own name) peeking through an explosion of color and texture.  These are energizing, absorbing works that stand out, even in a show that has so much to offer.