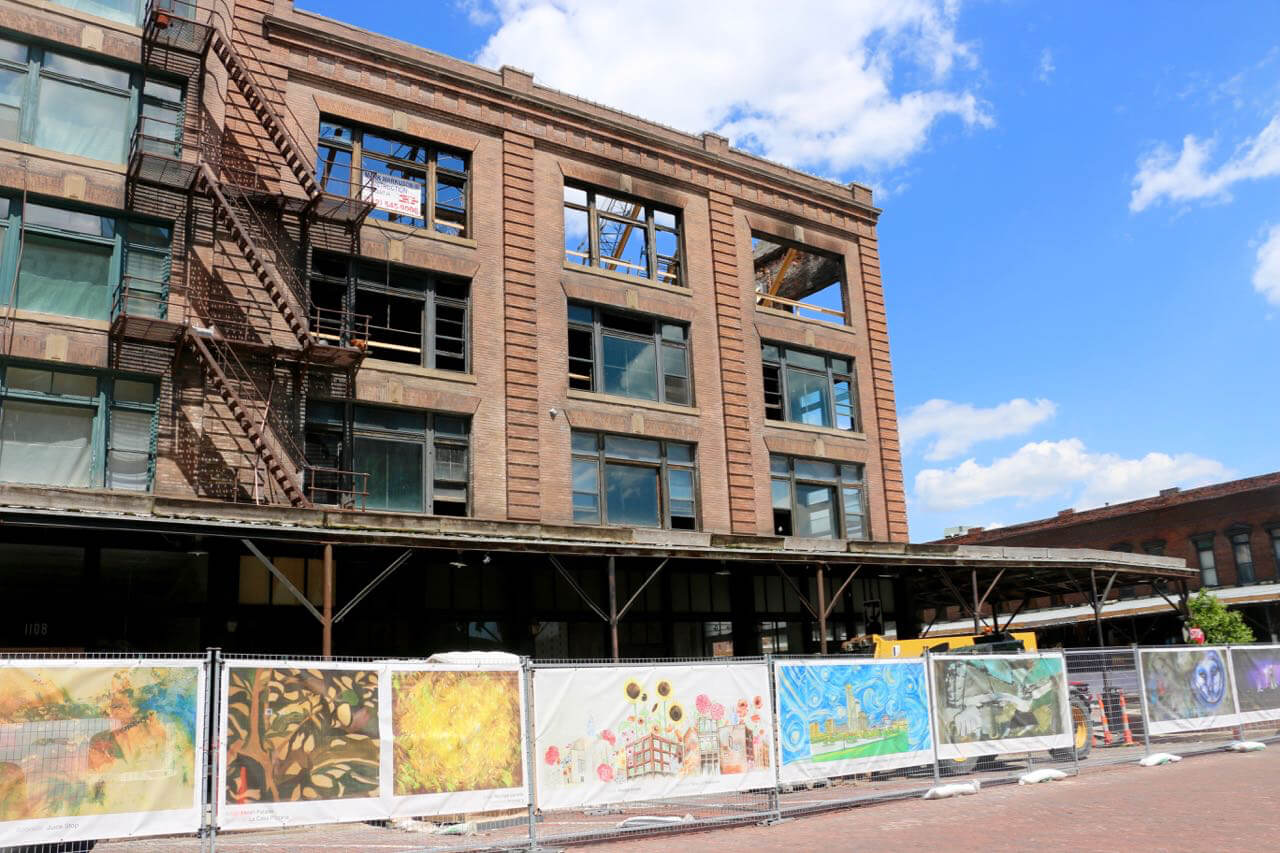 Just when a downtown tourist attraction was fast becoming an eyesore, the Old Market Business Association made its move.

The Mercer Building, gutted by a devastating January fire at its corner of 11th and Howard Streets, has drawn thousands of locals and tourists alike to witness its awful allure and unsteady reclamation.

But with Berkshire-Hathaway weekend and Farmers Market on the horizon and the Spring rebirth of foot traffic once again in full bloom, the OMBA began a process to reframe this iconic cornerstone of activity and commerce in Omaha.

The result is the generically titled Old Market Art Project, which features digital prints from 37 area artists placed on banners and fastened to the chain-linked fence that surrounds the Mercer Building renovation. Given its low-key approach and little fanfare, first impressions from the arts community and viewers have been quite good.

Nearly 300 artists responded to OMBA’ invite to participate, sponsorships helped finance the banners produced by Curzon Promotional Graphics and visitors are again taking selfies along the fence. Only this time the charred remains in the background are filtered and framed by something more than dust and cranes.

“The objective,” said Raglin, who helped oversee the entry process, judging and production, “was to bring life and color to the Old Market and to feature work by local artists. Creativity is a driving force in this neighborhood.”

Judges included Vera and Mark Mercer, Jo Anderson, Roger DuRand, Steve Joy and Kathy Nevins, all who have ties to the Old Market. So do many, if not all, of the artists who received a $100 stipend and a credit along with their sponsor on each banner. A complete list of the artists and their sponsors can be found at oldmarket.com/artproject.

Though artist compensation is quite small, participants, understandably, rallied to the call for reasons other than monetary, a mix of both the personal and professional.

“I grew up in Omaha,” painter Kristin Pluhacek said, “and had more experience, of all sorts, on the corner of 11th and Howard and in its shops and apartments, basements and alleys I could ever describe. That’s my connection.”

It’s personal too for artist Lori Elliot-Bartle, a member of the Artists Cooperative across the street from the Mercer Building, who “entered the project because of my affection for the Old Market, where my family and I spent quite a few work and leisure hours.”

Hot Shops artist Paula Wallace put her feelings more bluntly. “Sometimes the right answer is, ‘What the hell.’ The community was thrown for a loop with the fire, but we pick ourselves up and keep moving.”

Personal reasons aside, all three see the project’s potential for professional growth, both individually and collectively in the arts community.

“This was a large project executed in a very short span of time, and it still maintains some of that grass roots feel,” Pluhacek said. “The people behind it had honorable intentions, and as Old Market merchants, were also personally invested in its success.”

It’s the sort of investment Elliott-Bartle says could have long-term benefits after the banner display comes down about a year from now according to the OMBA.

“At the very least, a project of this sort can increase awareness about artists working in the city,” she said. “I think it makes art accessible to a wider audience. It will be interesting to see what kinds of conversations might begin on the sidewalk and get carried into the neighboring galleries. My hope is that it creates a link between the outdoor and indoor spaces where art is routinely displayed and sold.”

Though Raglin accurately points out that the range of artwork includes “unpublished artists who have never had a gallery exhibition” viewers will recognize as well as enjoy prints from many more established names including Steve Joy, Erin Blayney, Joseph Broghammer, Karen Kunc, Kat Moser, Christina Narwicz, Rebecca Hermann, David Hernandez, Bill Hoover, Bart Vargas and Judith Welk among others.

It’s this latter group that helps turn this work zone into more of a comfort zone as viewers recognize familiar imagery along the fence. It’s as if friends of the Old Market have returned to the scene of the tragedy to shore up the defense and lend their voice of confidence in the future. The next time you either sashay or mosey along the corridor take notice of the following:

You can’t miss Pluhacek’s red sunflower pastel surrounded by green eucalyptus and other pods and a globe rising portentously in the air. Her print dominates one’s view facing north at the corner and sets a tone for this public art spectacle.

“The sunflower form is a favorite of mine,” she said. “It has a “god’s eye” quality to it that makes it compelling beyond its sturdy cheerfulness…this particular sunflower is red, hot on a cool background. I think that the imagery gently suggests the corner’s recent history of fire and ice, and allows the viewer to celebrate and mourn all at once.”

Elliot-Bartle’s mixed media piece “Prairie Road,” the original an oil on birch panel, depicts a path collaged from handmade Tibetan paper cutting though a grassland. The subject has a portent of its own for the artist.

“A road to me is a sign of hope, exploration and excitement connected with a new experience,” she said. “These ideas seemed well-suited to a site that has so much history and will go through a transformation as it secures its role in the neighborhood’s future.”

“The Way It Feels Sometime,” in Wallace’s signature storybook style that appeals to all ages, also reflects the pervasive Old Market mood and resolve since the fire. In this narrative, a detail based upon an earlier series, the childlike Corky suddenly stumbles, falls flat, but then is soon is on the move again.

“The original painting and prints have sold to patrons who comment that the image and title say what their life is like,” the artist said, “that is, the way it feels sometimes.”

Other established artists in this display, such as Hoover, Broghammer, Joy, Kunc, and Vargas   also rely on their aesthetic, a few with a variation or comment. For example, Broghammer abandon’s his “flock of Joe” iconic aviary, and offers a carefully crafted sow’s head, Vargas uses his geometric montage like a landing strip to the reno’s epicenter. And, Hoover, better known perhaps for his lighter, narrative touch, depicts a rather ominous, darker abstract of a child running on a playground.

Several artists rely heavily on representational Old Market and downtown scenarios including Alyssa Busse’s pastiche, Andy Boonstra’s stormy night skyline, and David Hernandez’s Van Gogh’s “Starry Night” inspired skyscape. More to the point, however, are the homages to Nouvelle Eve and M’s Pub by Lisa Gill and Julia Mason. Most poignant of these is the restorative winter scene of 11th and Howard by Judith Welk in her own traditional folk art style.

But a personal favorite is Garry Allen’s simple, but elegant contour drawing of two figures paradoxically toasting a time well-spent and more soon to come.

Four artists in particular, Joy and Blayney, Hermann and Kunc, take a more abstract approach in tandem and in complementary fashion to the January tragedy. Joy’s subdued, geometric mix sharply mimics the jumbled bric a brac that lies beyond the fence in the aftermath while Blayney’s more expressionistic cool and hot palette mimics the nightmare night of fire, smoke and ice that came before.

Hermann and Kunc’s abstractions enjoy a similar relationship to the evolving scenario above and beyond the banners. Yet, now each pattern indicates that reconstruction has begun, piece by piece, Hermann in her hard-edged, bold design and Kunc in a flowing pastel. Slowly, artfully, the whole becomes greater than the sum of its parts.

A year from now, the banners will come down, a bit worse for wear perhaps, but possibly with yet another undetermined life to live. Raglin said they may be auctioned off to also benefit other OMBA projects, “but that has yet to be decided.” The artists also have mixed feelings as to their use.

“I would want to see how well they withstand the weather before offering them for sale or further display,” Elliot-Bartle said.  “I believe the Old Market Business Association and the Downtown Improvement District will share images throughout the year via social media. I think future uses of the images will have to be discussed with participating artists.”

Wallace is also unclear of the banner’s future but not of ownership.

“Since the artists received a small stipend for a single use project, the work should be returned to them,” she said. “If sold, artists should be compensated. Depending on their condition…maybe they could be used at schools or put in windows of empty storefronts.”

Whatever else happens to the artwork, Pluhacek likely speaks for all the participating artists with regard to the big picture.

“When a project, especially an art project, remains open…it becomes a lasting member of the community,” she said. “We all take possession, but none of us own it outright. I’m just going to enjoy the pieces for as long as they last, take a lot of pictures, and look forward to the glorious reopening of 11th & Howard.”