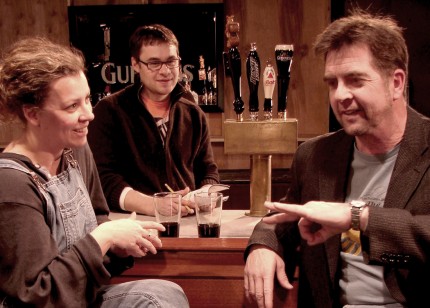 How often do you enjoy a play so much you can’t wait to see it again? So enchanted you quickly read the entire script of Distant Music , hearing the words once more as spoken by Scott Kurz, Kevin Barratt and Laura Leininger? Almost never, but it’s not surprising that it happens when Cathy Kurz directs the Brigit Saint Brigit Theatre and has Scott playing Dev, an Irish immigrant bartending at the Poulnabrome pub in Cambridge, Mass. I’d squeeze every blessed line into this review if only I could, but will settle instead for setting the scene with help from playwright James McLindon. He notes that “a fierce nor’easter blows” outside the snug pub with the bar on the right, a window on the left near a flickering Bass ale sign. The writer reminds us that such places are more important for talk than drink and adds words from James Joyce whose “Dubliners” describes a woman listening to “distant music.” Dev the bartender, we’re told, displays customary good humor, but “when excited, which is not infrequently, he is loud, animated, dramatic, a bit larger than life.” The bell rings, his friend Connor the law professor (Barratt) enters, and says, “God, it’s nasty out there.” Dev: “Snow is it, professor?” Connor: “No, Dev, they’re having a ticker-tape parade on Massachusetts Avenue.” Dev: “Feck off with ya. You’ve no call to be taking the piss out of a struggling young immigrant.” And he begins to draw a pint of Murphy’s stout, leading to an argument over Connor’s “pathetic vacillating” between a preference for Guinness or Murphy’s. At one point, Dev lifts the pint up like a chalice and muses, “If God were a bit more theatrical, this is what transubstantiation would look like. “There’s a very thin line between religion and stout, d’ja know that?” Dev calls Connor Janus, the two-faced god, for his vacillating, not just about stout but about his Catholic faith and his legal profession. He credits Janus to the Tuesday night visits by the Harvard Classics department. “I overhear the odd bit.” Don’t let the easy humor mislead you. It’s always as wise as it is funny, meaty as it is mirthful. And Dev is always “overhearing the odd bit” from his guests. Gaydar? He picked it up from the Gay and Lesbian Parents Without Partners on Wednesdays. But his eavesdropping becomes a bit much for Connor and his friend Maeve (Leininger) when they’re sharing life-changing issues. So keep your eye on an obscure piece of the set beneath a bar stool, a heating vent that provides a playful piece of action. The play runs a little under two hours at a pace that never lags. Yet it has the blissful comfort of a tavern evening with Elwood P. Dowd of Harvey fame. Will Connor surrender his cynicism about the law and accept a judgeship? Will Maeve risk her vocation to perform a forbidden sacrament? Will Dev return to his native Sligo to run a fish and chips shop? You’ll care about them, and about the strength of their faith or the lack of it. And you’ll love to listen as they sort out the lessons of life. Dev shrugs off that Boston bar, “Cheers,” where everybody knows your name. In Sligo, he complains, everybody in the whole village knew your name and every little misstep in your past. He takes up some issues with God, recalling when his grandfather questioned his possession of a sack of crisps (potato chips). After a lot of “says he” and “says I,” Dev explains that given his fondness for crisps and their placement next to something he was acquiring for his grandmother, it “was more God’s fault than mine.” Grandpa, he recalled, “looked quite thoughtful at that.” Connor: “So he let you go?” Dev: “No, he beat me same as always, but I could tell he was troubled in his mind.” McLindon lets Dev share some Irish lore about “party pieces,” little performances on evenings spent by folks not couched before television screens. Dev did some Joyce about the drifting snow, and “my older sister did the Molly Bloom.” Later, Dev does a little of her erotic poetry himself. And then he turns out the lights after a well-spent evening in a very hospitable pub. The Brigit Saint Brigit’s presentation of Distant Music runs through Feb. 19, Thurs.-Sat. at 7:30 p.m. and Sundays at 2 p.m. at the Downtown Space, 614 S. 11th St. in the Old Market. Tickets are $22, $18 for students and seniors. Call 502.4910 or visit bsbtheatre.com.