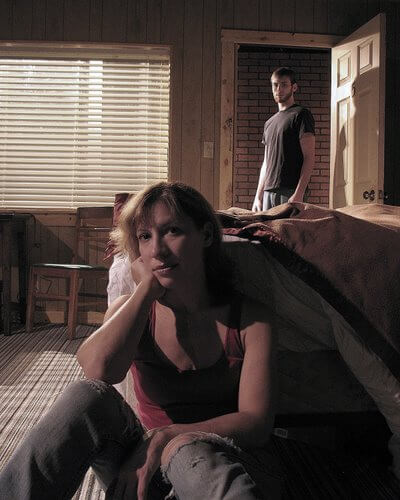 Seeing four plays in less than a week was my autumnal pleasure, but it turns out I’m reviewing the least pleasant of the bunch, Bug at the Blue Barn. Not that there’s anything wrong with being unpleasantly provocative.

If I want pleasant, I can walk my dog and savor the fall colors. If I want to think about the redeeming value of a provocative drama by Tracy Letts, I can watch director Susan Clement-Toberer draw memorable performances from a powerful cast.

But that’s not unqualified praise for a play that held an opening night audience almost breathless in its grip. Its power diminished as the two main characters, Kim Gambino as the lonely waitress and Brian Zealand as her ultra-paranoid motel guest, spiral downward into crack-pipe craziness.

Until that latter stage, one could be spellbound by their fears: her worry over the return of her abusive ex-con ex-husband Goss, played with great menace by Kevin Barratt, and Zealand’s politicized paranoia that makes all the noises in the night an ominous manifestation of some conspiratorial “machine.”

Once we’re convinced their Agnes and Peter have deteriorated beyond repair, however, it becomes a painful process that’s only partially compensated for by the power of their acting and the question of how Letts will take it to a shocking climax. The conclusion doesn’t disappoint, but our admiration, especially for guest star Gambino’s grueling portrayal, isn’t enough to make Bug as satisfying as the Barn’s recent treatment of Edward Albee’s Three Tall Women.

But that was arguably the best theater done in Omaha last season, so falling short of its standard is hardly a complaint. Bug is remarkable for so many reasons, including the technical prowess one expects in this Old Market space, especially the lighting design by Carol Wisner and the sound design by Martin Magnuson.

Before we meet Agnes in her motel room, her sad life style there is low-lighted by an unseen neon sign which flashed red on and off outside her closed venetian blinds. We learn early that her bleak existence requires coke-snorting with a little help from her lesbian biker buddy, R.C., perhaps the healthiest person in the story, played by Erika Zadina.

In this case, mental health means denying the existence of unseen bugs that Zealand’s Peter claims are eating him. After ingesting enough illegal substances, Agnes stares into his microscope and sees them, too.

In short, she’s drawn to him in her loneliness and soon shares the problems he blames on the government’s treatment of his wartime post-traumatic stress, which in his case is a euphemism for psychosis. It’s a tribute to Letts’ script and Clement-Toberer’s treatment of it that we’re tempted to believe there might really be nasty insects in their sleazy motel room which soon hangs with flypaper strips.

The playwright alleviates the dark intensity with light touches of humor. And it helps that their bare-naked pursuit of biting aphids is dimly lit, making it easier to focus on action rather than anatomy.  No offense to Gambino and Zealand, but you can be sure there’s not a whiff of eroticism when they appear unclothed, especially in the climactic scene.

Their more-pathetic-than-tragic fate becomes palpable when Dr. Sweet (Nick Zadina) enters the motel room and engages in an arch dialogue with Agnes while Peter hides in the bathroom. He first tries to get her to see how farfetched Peter’s paranoid delusions are, but then pretends he’s part of the conspiracy.

When he seems ready to indulge in their crack, Agnes warns him about lighting up where a sheet covers two big red gasoline cans. This less-than-subtle bit of foreshadowing allows the quip-heavy Dr. Sweet to note that he doesn’t see a jet ski anywhere.

The motel room has changed considerably since the start, when the blinking sign lights an unmade bed and a table laden with liquor bottles was the other focal point in a set designed by Martin Scott Machitto. While Magnuson’s sounds early gave a sense of a noisy world outside, the sounds grew louder and more ominous as if we heard the “machines” that threatened Peter.

The encounter between the paranoid patient and the doctor, a final mad monologue about a queen bug and the inevitable climax earn the drama’s label as a “psycho-thriller” long after its comic relief has been left behind. If you need an antidote after it ends, note that the program contains three bug-fighting pest control ads.