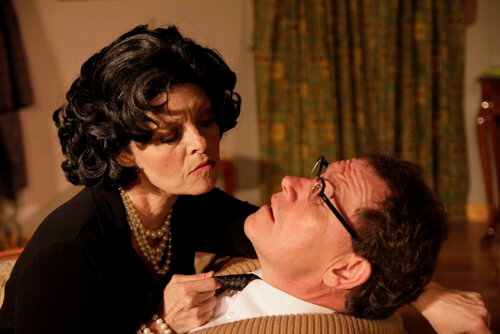 The Circle Theatre’s riveting production of Who’s Afraid of Virginia Woolf unfolds in the shadow of the most unlikely of set dressing pieces. George and Martha, the feuding protagonists in the Edward Albee classic that is celebrating its 50th year on stages everywhere, are anything but nice. But there it is nonetheless, the cloyingly cute plaque hanging in their living room, the one emblazoned with the inane motto of “Because Nice Matters.”

With the equally sardonic opening line of “Jesus H. Christ,” Martha (Laura Marr), an over-sexed 50-ish tart, sets the tone for the liquor-fueled battle royale that is about to begin in the home (“What a dump,” she adds in her best Bette Davis imitation) she shares with husband, George (Michael Markey). He was once heir apparent to chair the history department at the New England university headed by Martha’s father, but the eternally “associate” associate professor is now, as Martha bitingly puts it, nothing more than a flop, a nothing, a zero. He’s something of an invisible if decidedly erudite man who has grown weary of his wife’s predatory machinations whenever fresh young meat is hired onto the school’s faculty.

Enter the handsome Nick (Vernon R. Wheeler), the idealistic newcomer to the college’s science department, and his mousy wife, Honey (Haley Haas). The innocent 20-somethings have been invited to George and Martha’s for a 2:00 a.m. nightcap following an earlier affair at the home of Martha’s father.

What ensues, whenever Martha isn’t trying to sit in Nick’s lap — even when he is standing up — is an intoxicating soiree where truth and illusion play a game of cat and mouse as Martha and George go at each other in revealing a dystopian marriage, taking a breather only long enough to alternately crucify and then cuddle their tipsy visitors in such vicious parlor games as “Get the Guest” and “Hump the Host.”

Set in the skinny-tie “Mad Men” ‘60s, Haas is resplendent in costumer Nancy Ross’ iridescent, Twiggy-esque mini-dress in the minty hue of those sparkles infused into a roll of Certs. Also iridescent is the performance from the actress in what is perhaps her meatiest role yet, even if she is called upon to spend much of the evening in various stages of curling into or out of the fetal position, the very same alignment audience members are tempted to take in recoiling from the ugliness of George and Martha’s words.

The Russian-trained Wheeler shines as the subject of Martha’s lust. His is a physically demanding role, but look also for finesse in the subtler arts of both figurative and literal hand-wringing, especially when the barracuda Martha circles for the kill.

But this Denise Chapman-directed delight really belongs to Circle Theatre co-founders Marr and Markey as both deliver award-worthy efforts. Marr’s character took a little while to get used to, but she was soon hitting on all cylinders as the snarling, venom-spitting vamp, the very epitome of gin-soaked vulgarity who harbors a secret not unlike the burden carried (or should that be uncarried?) by her houseguest, Honey.

And watch closely as Markey (is it just me, or does he look and act a lot like Darren McGavin in this one?) meticulously buttons his shirt and straightens his tie in the penultimate scene, the denouement where he tees up a merciless round of “Bringing Up Baby.” Markey’s simple bit of grooming would be, in any other situation,  a mere throwaway, hardly worth noticing series of movements involving a necktie. Here Markey lends it a chin-held-high weightiness, a smug sense of great import. I was half expecting a ring announcer to appear and loose with the familiar “Let’s get ready to rum -boooool!”

This will be your cue to strap yourself in as this teeth-clenching, finely acted work, Denise Chapman’s powerful and emotionally draining staging of Albee’s iconic dramedy, careens to its breathless finish.

Who’s Afraid of Virginia Woolf? runs through July 28 at the Circle Theater, located on the lower level of Central Presbyterian Church, 726 S. 55th St. Showtimes are 7:30 p.m. Thursdays through Saturdays with a special Sunday matinee July 22 at 1:30 p.m. Tickets are $15 adults, $13 senior citizens, $10 students. Add $10 for an optional dinner an hour before showtime. For additional information, call 402-553-4715 or email dlmarr@cox.net.