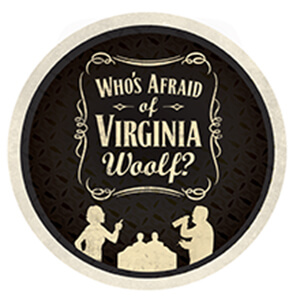 A song from Walt Disney’s Three Little Pigs seems an unlikely title for a dark, searing, epithet-laden play about two nasty, battling wedded protagonists. But so be it. Edward Albee’s Who’s Afraid of Virginia Woolf?  (1962) explores those craggy rocks. And evidently does it so memorably that it garnered a Tony Award for Best Play and the similar New York Drama Circle Award. Two actors in the cast also won Tonys and two Oscars went to members of the 1966 movie.

Clearly there’s a whole lot of earth-shaking going on. Omaha Community Playhouse digs into it.  As the middle aged husband and wife slug out marriage frustrations, they involve a previously innocent younger couple

“It exploded like a stealth bomb on Broadway, establishing Mr. Albee as the most important American playwright of his generation and setting a brave new standard for truth-telling — not to mention expletive-spewing — in the decorous world of the commercial theater” wrote Charles Isherwood in the New York Times.

As Ben Brantley pointed out, also in The Times,: “Edward Albee, the leading American playwright of his generation, has been confounding, challenging and stimulating theater audiences for almost half a century.”

It was up for a Pulitzer but lost votes due to what was then considered too much profanity and too much sexual provocation. In these modern times it’s labeled as “intended for mature audiences.”

Fasten your seatbelts; it’s going to be a bumpy night.