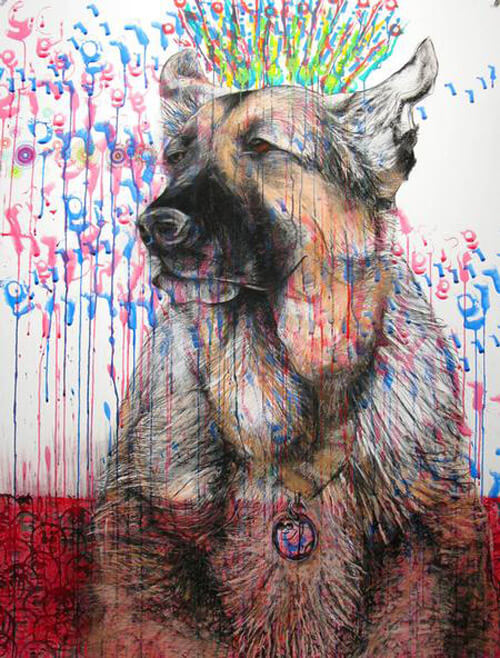 That cell phone in your purse, hip-clip or back pocket gets smarter and smarter. It’s no longer just about tweeting, texting, liking and the occasional butt-dial.

Today iPhones swiped across a QR code help you to check out and purchase all kinds of products and services. In addition, two new Galaxy’s embrace and playlists and photo albums are exchanged.

Whatever their purpose or potential, smart phones make it possible to leave at home our watch, credit cards and GPS device. Their purchasing power alone allows us to buy, sell and bid on virtually anything we want from A to Z. It’s an opportunity in Omaha not missed even in the nonprofit sector by the Henry Doorly Zoo and on the horizon for the Bemis Center for Contemporary Arts.

After more than a decade, Bemis Center’s main fundraising event is ready for prime time in the Digital Age. Its 14th Annual Art Auction this Saturday, October 20, will allow patrons to use electronic bidding to view and track their bids while enjoying refreshments and the company they keep.

It’s a system of convenience that Todd Simon, Vice President of the Bemis board, said proved profitable for the Zoo at a similar event.

“I floated the idea to Bemis staff the system that was used at Zoofari (auction),” Simon said. “The staff investigated and decided to proceed. We heard from the company (Auction Electronic Systems) that doing it this way can lift revenues by 10 to 20%. AES also puts the auction items up worldwide for anyone to bid. This is huge.”

Big enough, Bemis hopes, in order to reach its goal of gross proceeds of $350 to $450K, or about 25% of its operating budget along with other art sales, which Simon says is consistent with other previous years. All proceeds will continue to support Bemis’ artist-in-residency program, its series of exhibitions and its various community involvements including the Theaster Gates project which will officially launch in North Omaha this fall.

As Omaha’s most anticipated contemporary arts event, attended annually by over 500 patrons, the Bemis Auction is truly a community effort. It relies heavily on its sponsors including Laura and Greg Schnackel, Annette and Paul Smith, Teresa and David Rogers, Karen and Robert Duncan and Omaha Steaks, among others.

But most of all, Bemis depends on the contribution of over 150 artists who have donated more than 300 works of art. The auction will benefit artists as well who make the choice to share in the proceeds up to 50% of their sale. Beyond the money factor, Simon says, are the added benefits of exposure to a diverse audience and “the great feeling that artists are supporting a program that has supported them or artists like them.”

All that remains is whether or not the new bidding system will induce more than the typical 25% of patrons who bid at most auctions to do so during the silent auction. It opens simultaneously in the Underground and first floor galleries at 5:30pm and closes promptly in all venues at 9:00pm. The live auction runs 8-10:00pm and live auction bidding is available at proxibid.com/bemis.

All patrons will be given a swipe card with an assigned number that will link them to the auction system for viewing, bidding and tracking not unlike what’s done in eBay transactions. This means patrons can also put a top dollar amount on any piece of art and the system will bid for them until it’s reached. But you must follow its progress as you will not be alerted when your maximum is reached.

This means most GenX, Y & Zers, armed with digital devices of all sorts, should have no problem acclimating, but will Bemis’ mainstay of Boomer and beyond supporters do as well? “The key is lots of volunteers in the galleries holding tablets and assisting bidders,” Simon said. “There will also be a phone app and other ways to self-serve bids. My dad is 75 and carries an iPhone. If he can do it, anyone can.”

With or without a smart phone, this means patrons won’t have to step away from the buffet or bar in order to compete for a favorite work of art. It also means no more elbowing through crowds to get to that pen in order to corral one last desperate bid on site. Some may have enjoyed the madness but it quickly became a voyeur’s delight and left a lot of art bidless on the wall.

Furthermore, bidders have had four weeks of potential face time with the art, either onIine at Bemis’ website, or in front of the auction exhibition curated by McGraw and Damon. Though they can’t account for it on a national scale, both curators see certain trends in the work offered by artists this year.

“I see a move toward more representational and figurative work,” Damon said. “There are more familiar genres such as landscapes and portraiture, but the work is more conceptual and artists are taking more chances, experimenting with the medium.”

The above also indicates a trend toward the outré and non-mainstream in content which he acknowledges is “less safe and harder to sell, but is more fun for the artist.”

Despite the abundance of figurative works, including a distinct preference toward animal imagery as noted by several viewers at the exhibit’s September opening, McGraw, as he has done in the past, lends his curatorial skills toward grouping similar works by virtue of their particular concept, medium and design.

For example, in the live auction gallery in the immediate right corner hang three landscapes from Larry Ferguson, James Woodfill and Keith Jacobshagen that McGraw calls “transformative acts, ones that reimagine the landscape as well as their art:” Ferguson’s magisterial “Iceberg, Antarctica,” Jacobshagen’s “Ashland 10.29.10” and “Yankee Hill 11.24.10,” microcosms of his Golden Year project and Woodfill’s “Landscape #1,” with its abstract use of color and light and its relationship to space and scale.

In addition, on the far south wall are two striking treatments of flowers and vessels via Betty Woodman’s sculpture “Poppies” and Vera Mercer’s still life photo, “Sweet Peas.” McGraw characterizes each as “a celebration of their genre, shared motifs and bright colorful palette.”

The silent auction galleries are also well-represented by significant art and McGraw and yours truly have selected a few among many for consideration based upon two categories: best value for beginning collectors and value at any price for the veteran. The cutoff, Buy It Now price is about $1,000.

In category one, McGraw suggests the following: two edgy “Untitled” works from Lucrecia Troncoso and Kenneth Adkins, the first a very pink pencil abstract that the curator finds “unsettling and a strange use of her medium,” and the latter an “ominous yet beautifully crafted” mixed media of inked-out mini-portraits on a shockingly yellow background.

For the experienced collector, McGraw offers a “real Vegas experience” with Brian Porray’s maximalist abstraction. In sharp contrast, Deborah Murphy’s large realistic acrylic painting of a small-town neighborhood, “The Distance Between:” “I love how within a seemingly mundane, prosaic image you achieve impossible relationships by idealized fiction and a constructed reality.”

McGraw also appreciates Peter Demos’ “Untitled” gloss and matte acrylic because he pushes beyond its abstract simplicity. “There’s a lot happening here, an intense calibration of composition, form, light and refraction as it engages in black and white abstraction.” But for those seeking something beyond the border of “good taste” or the mainstream, the curator recommends the wonderfully scandalous “Omaha Swimmer vs. Scott Blake.” “How could you not want that in your home?”

The new collector might also consider the following from this writer’s list: a Dan Crane and Christine Stormberg collaboration, a kaleidoscopic portrait of “Eric Shew;” Ethan Murrow’s “Double Double,” a four-part litho of animal, mineral and industrial masks; Avery Mazor’s “Pink,” a stark landscape of rural and urban sophistication; Joseph Biel’s “Face to Face,” a simply elegant confrontation in profile in white ink on black paper.

For offerings with value at any price point, there are: Watie White’s imposing black-and-white woodcut print “Ganymede,” whose bucolic backyard reverie is jolted by a hen chasing its chick; Christina West’s painted ceramic “Mermaid Treasure” is a marvelously lewd nude in turquoise; Heidi Bartlett’s splendidly cut Lenox paper, ivory on ivory “Victoria,” that evokes another age yet is remarkably contemporary in structure and style.

There is also Angela Fraleigh’s “Untitled Study,” a watercolor portrait of exquisite, fragile beauty as her subject seems to slip out of sight and consciousness. Likewise, there is the delicate and ephemeral use of text, frame, glass and centipedic figuration from Ying Zhu in her card stock cutout diptych, “Russian Leftover.” Finally, in sharp contrast to the above, we have two graphic animal images, the expressionistic cur in Kristen Pluhacek’s mixed media “Power” and the chuckling, disembodied “Goat Head” from Vera Mercer, served up on a sublime “platter” for your consideration.