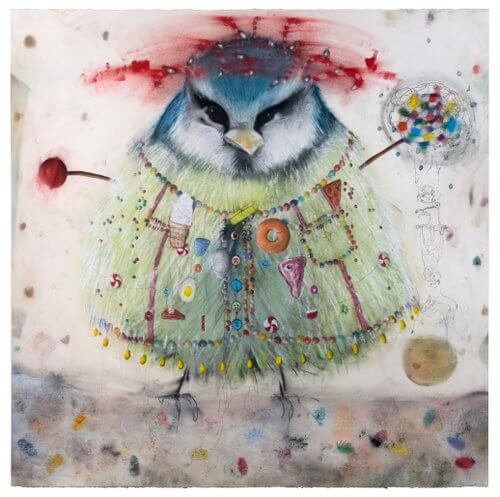 Joseph Broghammer’s species of birds now roosting at Anderson O’Brien Gallery in the Old Market might challenge any Ornithologist studying bird behavior. Not perched for flight, including those with wings outstretched, these birds have made their claim.

They each occupy a large amount of space. As protagonists in the depiction of the human condition they are linked to Chicago Imagism which had its beginnings in the 1960’s. This art movement’s hybrid mix of surrealism with the comics has fueled inspiration for many artists inclined toward a personal statement.

It is not surprising then for Broghammer to refer to two Chicago artists, Phyllis Bramson and Tony Fitzpatrick in our recent conversation about his work.  “I like the look of their art,” he said. “The design and color in Bramson’s is beautiful. Tony Fitzpatrick is fun and twisted.” These adjectives apply to many of the works in this new exhibition, Joseph Broghammer.

“Fraidy Cat” peers out beyond the viewer’s gaze. The red plumage expands, like hair standing up on the back of one’s neck. The bird’s alert concentration directly contrasts with the supine stretch of a little black cat. How these two postures relate to the concealed and revealed crowns around the bird’s head are anyone’s guess. “Some friends were poking fun at me about being the King of Art,” Broghammer reluctantly shared. “That’s not the point,” he said. “The art is what it is. The viewer needs to have their own experience.”

The strong composition with saturated color becomes Broghammer’s field in which he layers and maps these narrative tales. Each drawing may be derived from his own experience, yet part of his artistry lies in making it ours as well. “Mark Rothko is the first artist who took my breath away,” he said. Rothko’s emphasis of color in the field of the picture plane has become inspiration for succeeding generations of artists, Broghammer included.

“Morton’s Oriole” contains any number of signs and symbols including references to playing cards, beach paraphernalia, and a human foot “charm” dangling in front of the bird’s chest. “You know what a Morton toe is?” Broghammer asked. “Well it’s a condition where the second toe is longer than the big toe. It’s a common thing. Someone I was talking with had this condition. I wanted to remember this conversation from a day in my life. The drawing started with the toe, and then associations with other biographical data about the people went from there.” The high wheel bicycle, jack in the bird’s forehead, and Greek cross in the lower right hand corner could challenge any one’s curiosity. The sgraffito quality of line work is balanced by sumptuous pastel. This oriole invites us to ponder but isn’t giving anything away.

The intense yellow square in the middle of the page sets up an immediate tension in the pictorial structure of “Tic Toc Life.” The yellow glows, yet the face of the owl shines pale. The precarious pendulum swinging beneath the yellow faced cube is a heart in distress. “A friend had a heart attack,” said Broghammer. “It’s me looking at my life, recording it all.” The fanciful variety of signs and symbols tickles the imagination. Applied with Broghammer’s tracing technique, they appear almost lighthearted in contrast with the bird’s sober expression. Could the large mouse in the lower left hand corner even dare to climb the grandfather clock behind the bird?

The signs and symbols continue as clues for mysteries which can’t be solved. It is for each person looking to use the information in a way which makes the most sense to them. Numbers, letters, signs of the zodiac, and playing cards are just some of the references scattered throughout the exhibition.

“Chicken Jeep” with startling red plumage at the top of each eye appears to be in some distress. It’s hard to tell if it’s the angular construction nailed to the neck, the bell dangling from the tip of the tail, or the surrounding air cosmologically filled with any number of possibilities. The personified pain won’t be comforted by the luscious passages of pastel. “Chicken Jeep” is stopped in its tracks. How could any bird support such brilliant plumage on two ‘barely there’ feet? There’s more to this story than meets the eye.

The intriguing composition of “Edgar’s Predictions” is sleight of hand. The synchronization of implied motion maintains balance throughout the image. The bird appears to be partially concealed, almost as though “now you see it, now you don’t.” The whimsy of the figure above the bird’s head could be poking fun at psychics or even himself.

There are a few pieces in the exhibit which aren’t intensively symbol layered. They provide quiet reflection, an opportunity to enjoy the sheer beauty of their draftsmanship. There’s nothing to decipher, no meaning to be made. “Poe” is an exceptional blend of formal qualities and expressive nuance. While “Plastic Me” could be Joe Broghammer ‘suiting up”, “Poe” is the essence of ‘every bird’. “Ceramic Bird 2” and “Ceramic Bird 3” communicate pathos even in double artifice, as drawn representations of ceramic artifacts.

“Tolstoy” is the one piece not featuring a large bird. Eggs, apples and apple seeds are scattered throughout the picture plane. Tolstoy appears to be standing in front of an apple tree. What is the knowledge to be born in taking a bite of this forbidden fruit? A variety of other symbols indicate self knowledge occurs through the actions of everyday living. The crown at the top of the page brings to mind Tolstoy’s treatise on non-violent resistance, The Kingdom of God is Within You. The drawing is not religious, but it is revelatory. It might contain the seeds of something new, for the artist and the viewer too.

“I’m really a story teller,” Broghammer says in his Artist Statement. “But I draw my stories rather than speak or write them.”