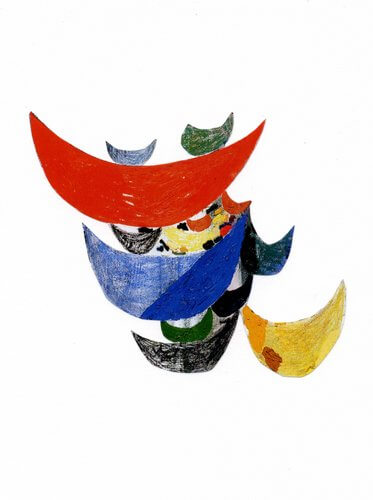 If you enter the Bemis Underground in May “expecting the unexpected,” you are forgiven the cliché. This alternative venue’s current exhibit, Out of In Focus is no exception. Even its paradoxical title warns the viewer of preconceptions. How can one keep something out of/in focus, let alone appreciate the process and the results.

There is much to appreciate in this challenging exhibit which features large panel paintings from Lincoln artist Alex Borovski and several dozen reductive, miniature collages of Omaha’s Lonnie Potter. Visually, it’s an odd coupling that first drew the attention of Underground curator Joel Damon who hung the artists side-by-side in Bemis’ impressive inaugural juried exhibition in 2011.

Juried winners were promised their own solo shows in the Underground which explains Borovski’s presence in Out of In Focus. But Damon was so impressed with Potter’s series of abstract miniatures that complemented the former’s imposing “Mt. Massive,” the latter was included here for similar effect.

“Something magical happened being side-by-side in the juried exhibit,” Damon said prior to their artist talk. “It wasn’t just a matter of a similar palette. They share a similar sensibility best understood within their individual differences. I saw their connections which place special demands on their viewer.”

In order to capitalize on different points of view, content and tone, Damon organized the show by alternating Borovski’s large paintings with multiple sets of Potter’s “collages,” four to a set. Visually the show makes a nice first impression as her work takes advantage of the venue’s quirky sightlines. Yet even as they direct traffic and attention the smaller work draws you in before you turn a corner and the “in and out” process is repeated.

Though the process of engagement for the viewer requires a certain push-pull, the work has other opposite demands as well. Borovski’s busy abstract expressionist paintings, some of which hide figures or reveal narratives such as “The First Highway” or “Energy Capsules/Early Disconnect” are in macrocosm. Her all-encompassing imagery must be deciphered within its many details even as you pull back to absorb it all.

Instead of being an editor/interpreter, one has to approach Potter’s minimalist, conceptual designs as a reconstructionist. The artist has literally culled and reduced major works of art from contemporary art publications and mounted each re-creation in microcosm on card stock. It’s up to the viewer to come face-to-face with each work and then re-imagine each more expansively and within the context of others in its set and throughout the show. As with Borovski’s imagery, a visual language will emerge as his work too comes in and out of focus.

Perhaps the biggest challenge facing viewers in this show is reconciling that there aren’t three separate artists in this two-person show, a first impression that even some Bemis staff acknowledged. Along with her now familiar abstract and expressionistic paintings, Borovski has included here a series of even more impressive figure studies within nature that suggest the presence of a third artist. Not only does this addition raise the bar in her career while signaling a more mature direction, these four figures dominate the exhibit.

All four works, “Night Bather,” “Back to the Familiar,” “Surprise Landing” and “Gloria,” each strikingly commanding, suggest a figure floating in or emerging from a forbidding verdant pool and jungle. The works beg for interpretation given their specific facial expressions and body language, but unlike her more iconic and multi-layered “mash-ups,” her figure studies offer fewer clues. This is to the artist’s credit.

That these aren’t’ flattering portraits or portrayals reminds one of similar work by Theresa Pfarr in a recent show at Modern Arts Midtown. But the guilt, fear and anxiety raised by Borovski’s bathers aren’t’ motivated by Pfarr’s social satire and commentary. Instead, an apparent loss of innocence on the part of her bathers seems to be, visually and conceptually, more mythical and biblical.

Taking a cue from the nude torso in “Back to the Familiar,” as it rises from the ooze, red with its blood and shame, one imagines that all of Borovski’s protagonists are in a process of “rebirth” from their former Garden of Eden into a world of experience. Whether interpreted in Old Testament terms or those more political and historical, given her Russian past, Borovski paints and composes in broad, gestural strokes within a palette of bold and earthy reds, blues and greens contrasted with fleshy pinks and pale grays on a background of shadowy black.

Though her image-heavy cornucopias and scenarios continue to engage, particularly “Energy Capsules/Early Disconnect” with its mythic, Poseidon figure dominant in his teeming sea, Borovski’s more abstract and experimental work is less impressive. The pixilated or pointillist “Micro-Macro-Map” has merit, but “Frankenfort,” a botanical mix of organic shapes and neon colors flow to nowhere and add little to her oeuvre.

From very humble beginnings as a minimalist painter and installation maker of ordinary, household materials, Potter has narrowed his focus even further. His organic and geometric “cut-outs” on 4 x 6 note cards represent not the gist of a major artwork torn from an Artforum, etc. Instead, the artist says he confronts the original “to see how little I can take away before the whole tumbles or tips over.”

If this seems a little obtuse, imagine a tiger without its stripes, a leopard without its spots or, for that matter, the curl taken from a surfer’s wave and then “made it my own.” Further putting his own stamp on this work, Potter titles his pieces with obscure words, some of which, such as “Eclat” (brilliancy, as in achievement) and “Nimbus” (a rain cloud or radiant figure) can not only be found in Webster’s but might actually shed light on the work itself.

Titles aside, Potter’s pieces succeed on their own providing a visual language that unites each piece whether its source was a Kandinsky, Delaunay or Stella. By isolating on key design elements within larger works, Potter has a knack for making the familiar extraordinary as the eye flows from one visual motif to another.

Though his contribution here seems at times a bit obsessive, one is drawn to his patterns, simple and pure, whether formal and geometric in “Desinence” and “Mithrodate,” with their layering of building blocks and graphic lines, or intuitive and organic as with the lava flow in “Epicene” and the flotilla of floating vessels in “Frondescence.” Other works are more emblematic such as the sergeant stripes of “Canorous,” the musical clef in “Eclat” or Stonehenge appearing in “Hobbledehoy.”

Borovski and Potter may seem an odd mix to some but if this exhibit isn’t exactly what you expected then at least you will know you are out of your comfort zone and in the realm of possibilities.