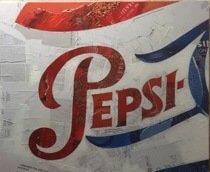 Another holiday season has come and gone, a traditional time for family and fellowship. And with it exited the barrage of commercials, newspaper inserts and alluring storefront displays, all engineered to make us to think of just what gifts—what consumer goods—would be the ultimate tidings of comfort and joy to bestow upon our loved ones.

Much depends on the success of market hype. There will be winners: hot new trends, year-end profits, merchant sustainability, and seasonal employment. And losers: returns, overstock, and revised business forecasts.

Among shoppers, name recognition scores very high this time of year; we trust in an alphabet of tried-and-true brands to define satisfaction and reliability: A is for Apple, B for Barbie, C for Crayola, D is for Disney….

How appropriate it is then to see the consumer-centric art of Cey Adams featured solo in Brand New at the New BLK Gallery over the holidays. The New York-based Adams, who is at once a visual artist, entrepreneur, graphic artist, brand manager, and product designer, has been exploring trusted brands in a new body of work that riffs on a variety of corporate logos. (And how great it is to see it in a recently missing-in-action gallery at one of the Metro’s most adventuresome, creative branding agencies.)

Adams arrives with an enviable pedigree, the result of hard work and fortuitous connections. He began plying his craft on the street, making spray art during the emergence of the graffiti movement in downtown Manhattan in the late 1970s, and was soon exhibiting alongside the likes of Jean-Michel Basquiat and Keith Haring.

Moving into the music scene, he became Creative Director for Russell Simmons’ Def Jam Recordings, and as co-founder of the label’s visual design firm has created visual identities, album covers, logos and ad campaigns for Run DMC, Beastie Boys, LL Cool J, Public Enemy, Jay-Z and others. If anyone is poised to dissect and reimagine graphic identities, it should be Adams.

Strung across the gallery are a variety of small and large collages that limn familiar names in the script associated with their product lines: Nike, Hot Wheels, and (Nebraska’s-own) Kool-Aid. Two large paintings, one finished and one still a work in progress, contrast soda rivals Pepsi and Coca Cola.

Personal touches take them away from being pure imitation—deviations of color and introduction of pattern chief among them. Sometimes the name of a product is cropped, but it’s so iconic, so culturally “sticky” that the whole is understood from the fragment. This is especially true of one motif repeated throughout the show—the American flag, arguably the country’s most recognizable brand, whatever its loaded meaning.

For Adams, these works represent different kinds of play. Clearly, they tip their hat to Andy Warhol, Jasper Johns, James Rosenquist and other old masters of Pop Art. That movement, begun in the late 1950s, took on the subject matter and techniques of consumer culture, creating a revolutionary mixture of high and low art. (For more on Pop, check out the remaining days of In Living Color: Andy Warhol and Contemporary Printmaking at Joslyn.)

Adams’ choice of brands is admittedly triggered by childhood nostalgia combined with a personal/professional love of typeface and graphic design. There is little parody, irony or cynicism in their selection, seeming to keep with the joy of the season.

Additionally, these testaments to his affection are safely historical—there’s no longer effrontery in any such subjects calling themselves art-worthy. Similarly, there is no intended meaning attached to the collaged items, which range from floral prints to cut-up pieces of newspapers and books.

They serve as textural, not textual, contrasts. In fact, Adams believes that the sheer impossibility of removing the brand reference allows him enormous latitude in his chosen approach to visual sampling using variations of color, texture, shadow and light.

Sprinkled among the logo works are larger, more expressionistic studies in watercolor, spray paint and ink that trace Adams’ roots as a graffiti artist. Here he experiments freely with brushstrokes, gesture, color and layering. Finishing off the wall he used as his easel for these drawings, he added a festive spray mini-mural, creating a new logo for hosts New BLK. In this way, this exhibition of new work showcases Adams’ stylistic interests retrospectively.

Perhaps Adams will make Omaha his next subject of cultural branding, as it has a new special place in his heart. Arriving this summer as a resident of the Bemis Center’s Carver Bank program, he quickly found the city an incredibly rich and diverse place full of great energy and amazing potential, conveniently situated in the middle of everywhere. In a few months’ time, he’s made friends and cultural connections, as well as reached out to area high school students with the message to be fearless and creative in their pursuits. If only there were a label for that.

Cey Adams: Brand New is on view through January 15 at the New BLK Gallery, 1213 Jones Street.