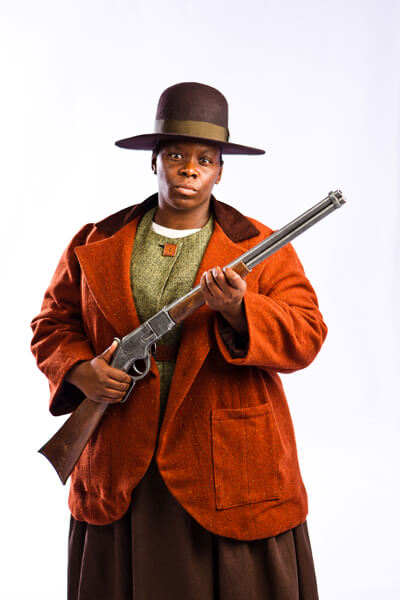 Susie Baer Collins got ready to direct Flyin’ West, the story of brave black women who homesteaded in Kansas, by driving south last summer to Nicodemus “in the middle of nowhere.”

She’s known for going to great lengths to prepare her Omaha Community Playhouse assignments and it’s not that Nicodemus is so terribly far away in miles as much as in history. Think driving west to Kearney, dropping down to Holdrege and then heading south on U.S. 183 and stopping about 43 miles into Kansas in Stockton, population about 1,500.

She stayed there with husband Dennis and cast member Denise Chapman because Nicodemus, 18 miles west on U.S. 24, lacks lodging. In fact, I looked in three different Rand McNallys and didn’t find it in any index that lists town names and populations.

Feeling the challenge of catching up with the high-energy research zeal of Collins, I called my barber, Raydean Dietz, who grew up on a farm near WaKeeny, Kansas, about a half hour south of Nicodemus. “Yeah, we used to drive up there for Ernestine’s barbecue…good food.”

Well, Ernestine has passed on and her good barbecue is gone from Nicodemus, but what remained for the Playhouse director and her leading lady was the 133rd annual Emancipation Celebration and Exodusters’ Reunion. Therein lies the story that led to their historical and sentimental journey.

Sophie Washington, the role played as an adult by Chapman, joined the African-American exodus to Nicodemus at age 15, accompanied by Fannie Dove, 12, and her baby sister, Minnie Dove. The Homestead Act allowed Sophie at her young age to qualify as a “head of household,” so she proclaimed:

“I want this town to be a place where a colored woman can be free to live her life like a human being.” So they made it “a place to call home.”

Playwright Pearl Cleage, the director explains, “isn’t going to spend a lot of time” on black vs. white, but rather “the conflicts within their own race.”

Casting an all African-American show, Collins “almost told Chad that we have no roles for Caucasians” before she recognized his mixed ancestry.

His character’s nasty treatment of Minnie gave the director an intriguing view during rehearsals of Rusheaa’s response, as “a really modern young woman,” to his behavior. “She’s thrown to the ground and very much abused,” so the actress took time to develop her in-character reaction to 19th century treatment she definitely would not tolerate in 2011.

The westward migration caused by the Homestead Act began about 1880 and inspired the exodus of some 60,000 called Exodusters, including those led by Benjamin (Pap) Singleton to settle in Nicodemus . The anniversary celebration attended by Susie and Dennis Collins with Denise Chapman included a Buffalo Soldiers re-enactment and a ballet excerpt based on the play written in 1995.

“What really captured our hearts was witnessing the heartfelt reunion of families,” Susie recalls. A woman with roots in Nicodemus, Angela Bates-Tompkins, will visit the Playhouse for a talk-back based on her ties to the original homesteaders.

The women who went “flyin’ west” fled Memphis, which Sophie found “full of crazy white men,” so she could shelter her little family from the prejudice of the outside world. The New York Times called their story “the most potent, gripping play” the producing company had created in the three-year history of its theater.

Audiences root for Sophie, Minnie and Fannie (Francesca Hogan) as they struggle against speculators who want their land and cope with Frank’s abuse of Minnie. These young pioneers encounter Miss Leah (Phyllis Mitchell-Butler), one of the earliest residents. She doesn’t always see eye-to-eye with Sophie, but offers her own recipe for dealing with Frank.

The play came to the attention of the Playhouse when resident director Amy Lane added it to those under consideration by the play-reading committee. “Everybody loved it,” and wanted to do it “if we could pull it off,” Collins says.