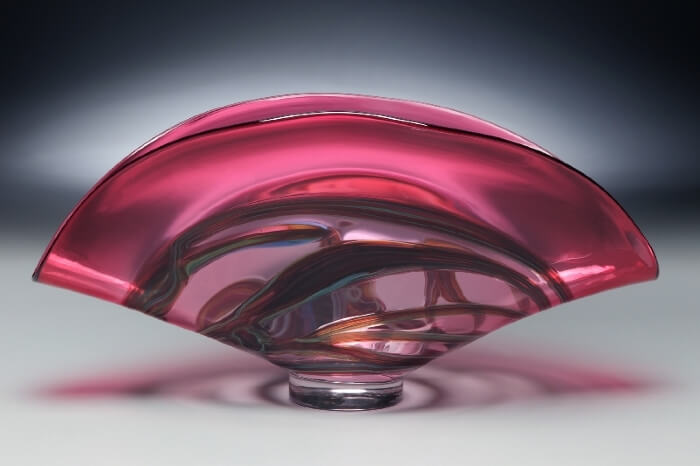 Viewing The Greatness of Studio Art Glass, the group show currently on view at Gallery 72, one has the sense of a beautifully designed art history textbook come to life.  Rich in content and impeccably installed, this show provides a great opportunity to understand the relatively brief history of studio art glass as an American art form.

The twelve artists in this show (two work as a duo) all combine to say a great deal about art glass’s past, present, and future.  Something that we, the viewers, don’t always grasp when we look at a work of art is how singular the experience of making that particular work was for the artist.  Part of that singularity resides in the medium through which the artist has chosen to give the work its form.

As observers of the finished product, we might sometimes ponder why a work is made of stone, wood, found objects, digital projections, oil on canvas, or some multimedia amalgam of all of them.  Glass raises the why question more pointedly than other media, I would suggest, because glass has had to work harder to prove its own existence as a medium.   Glass was dragged out of the world of industrial design—where it was useful in making helpful objects such as windows—into the realm of art.

The pathway from industry to art was very direct, because it went largely though one man, Harvey K. Littleton (1922-2013), who has three intriguingly analytical works in this show.  Littleton grew up in Corning, New York where his father worked as a physicist for Corning Glass Works.  In college, he tried briefly to follow in his father’s footsteps, but his art classes proved much more inspiring.  Viewing works with titles such as “Oblique Section Rectangular Ellipsoid (Three Parts)”—his titles show he continued with a kind of scientific approach—we should be thankful that he found his way.

Littleton’s first medium of choice was clay.  At the age of 35, however, after establishing himself as a passionate mentor to many artists at the University of Wisconsin, he took his family on a driving trip across Europe that included visits to the studios in Italy where the world’s most admired art glass is made.

From such encounters can come great things.  From that day forward, Littleton was the glass man.  He held two influential workshops at the Toledo Museum of Art in 1962 that brought together artists and educators interested in bolstering glass’s status as medium to which artists could dedicate themselves.

This effort on behalf of glass required building an infrastructure of teachers, equipment (particularly small-scale furnaces), funding, and collectors, all of which came into being through the 1960s and 70s through the efforts of Littleton and his colleagues.

This is all ancient history now, and the show at Gallery 72 says nothing if not that glass has continued to develop as an art form over the last half-century.  Part of glass’s ability to surprise springs from the interplay of transparency and opacity within a piece, and the degree to which this interplay is expressed through color and texture—in what is normally intended to be a smooth, invisible, half-presence through which we view the world.

Take the works of Gary Beacham, who is well-represented in this show by eight works, most of which feature intricate ribbons of color deep within the interior of clear but dense-feeling glass.  Compare that with Therman Statom, who has contributed four of his familiar, affecting pieces assembled from rectangles of sheet glass used to define Joseph Cornell-like spaces inhabited by bits of found glass, Twombly-ish scratchings, and visual elements of other kinds.  Absent is the intense intricacy of Beecham’s work, replaced by a sensibility that is sure of itself, subtle in its inflections, and balanced somewhere between the shapes of nature and the detritus of memory and modernity.

Yet another intriguing use of glass occurs in the work of Michael Janis, for whom the material functions as a lens, sometimes one of several, through which we view the other, more pictorial elements of the work.  Sometimes these elements are three-dimensional, as in the glass leaves that cascade down the front of “The Forest for the Trees.”  Sometimes they are both two- and three-dimensional, like the tiny shadows sprinkled across Janis’s works that are cast by bubbles in the glass surface.

Artists working in glass often mention speed as one of the most notable aspects of the experience.  The glass starts to cool as soon as it is blown, and there is a limited window for the artist to do with it whatever he or she wants.   It can be an adrenaline rush or an exercise in frustration.

With that in mind, there is something delicate and mysterious about works in which the glass has been stretched to its limit, like the flock of swaying pieces by Victor Chiarizia that populate the front windows of the gallery, or pieces from the Drop Series by Tom Kreager huddled near the back.   When I saw Kreager pick up one of his own works by the stem at the show’s opening, I thought for sure a grisly snap was about to follow.

Speed seems to have nothing at all to do with the solid, block-like experiments of Jiyong Lee, or the melancholy sculptures of dead birds and a spectral organ called the “pendila” made by Chad Fonfara.  These artists have given us forbidding works, one suggesting a constructivist-like intensity and the other a gothic morbidity expressed through glass that now appears to be something else.

Allegra Marquart’s past as a printmaker lingers in her flat, pictorial pieces that seem glow like pages from a magical storybook (Aesop’s Fables is one of her inspirations).  In the four pieces by the team of Kate Vogel and John Littleton (Harvey’s son), the whimsy of the sculptures belies how hard their shapes and pale, misty colors were to achieve.

Perhaps the most exploratory of the artists in this show is Corey Broman, whose eight works suggest a diversity of forms and approaches that are, as he explained in his gallery talk, often the consequence of changes in the practical circumstances of his studio practice.  Hearing Broman’s account of seeing a glass blower at work for the first time when he visited Branson, Missouri as a child, one gets a vivid sense of why glass is so appealing to those seeking an appropriate material for what they want to express.

With this show, Gallery 72 has given us an engaging array of pieces from art glass’s past and present.  It is not to be missed.  Harvey Littleton would be proud.