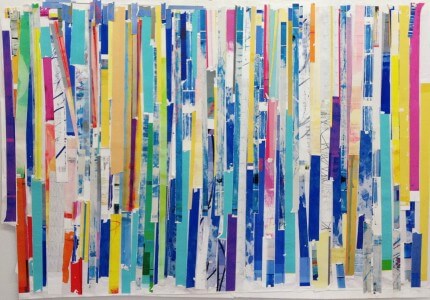 Tom Prinz’s new exhibit, Constructs, at Gallery 72 consists of a mixture of large black and white digital prints, elegant colored collage assemblages with carefully harmonized strips of printed and layered paper, and one painting, done with a plaster knife, which echoes the layered and subtle style seen in all of the other works).  There seems to be a thread moving throughout this exhibit that makes a suggestion of architecture—and the built environment—which is not unexpected, as Prinz is trained as an architect.

The large digital works, in black, gray and white, seem to suggest unfinished construction sites.  One can discern emergent environmental shapes and horizon lines within the pieces, as well as repetitive mark making to establish rhythm, and ghosts of torn paper edges for contrast and texture.

Prinz commented that he likes the process of developing images, like a flower before it blooms–and stopping the process before the finished step, with emergent forms only suggested. He finds more tension in this approach than one would achieve by producing a finished composition.

This may remind the viewer of the tradition in Eastern art of suggesting a form without completing it, allowing viewers to add their own “finishing touch”, and thus be more actively involved with the work. By using such large scale, Prinz feels he attains a more painterly composition, as well as a feeling of physicality in the digital pieces over time.

Five years ago, Prinz began to make art full time. He has a large-format Epson printer to expand his painted studies into 4’x6’ dimensions. Copying such large sheets can take up to two hours each. There is no drawing in his preparation, but for his color compositions, he carefully tears the prints into strips, laying them out on 4’x6’ foamboard on sawhorses, or hanging the papers from the walls or ceiling (if sculptural).

He works intuitively, varying the ebb and flow of the colors, arranging and rearranging parts, to organize the colors and subtle marks present on each piece.  This particular process is a more nuanced approach of art making, with a seeming dialogue among the torn edges and spaces between.

“I want them to retain an emergent, soulful quality, “Prinz says. “It’s not about ideas so much as thoughts. Interpretation is up to the viewer. I like to think about ambiguity…it can be this—or that. The goal is to occupy a space between.”

The viewer can deduce an intellectual rigor apparent in the various art pieces—quiet, but ever-present—a subtle expressiveness that seems to match this gentle, thoughtful artist.  Though fairly abstract, these works may well please most visitors’ eyes. This rather meditative approach seems to promise our continuing to see something new with each viewing.

Prinz is principal architect of Arcstudio, a firm he established in 1990, with the goal of exploring both art and architecture. In 2001, he purchased a Benson storefront building, which he redesigned with architecture students, rather in the manner of Samuel Mockbee’s “Rural Studio” concepts in Hale County, Alabama, where students learned to build on site, using innovative designs and materials.

Prinz and his students used rigid plastic for “walls”, to increase the availability of light in the space, as well as trying out various approaches to simplify the space and respond to the specific needs of this nontraditional contemporary artist. Jeff Day’s Min l Day architecture firm uses the building’s main floor, and Prinz the second floor (as well as two bedrooms at home, vacated by college sons, for smaller, 2’x3’ projects).

In September, 2013, Prinz entered an international juried competition and was awarded a solo exhibit in the Los Angeles Center for Digital Art (LACDA). He had 10 pieces in the show, two of which are in the Gallery 72 Exhibit.

His father worked as a locomotive engineer for Union Pacific.  Prinz described him as handy and a big influence. His mother was from Ireland. Prinz drew a lot as a kid, but sports were his focus in high school. After graduation at Creighton Prep in Omaha, he earned an undergraduate degree in architecture from the University of Nebraska at Lincoln, and his masters’ degree after three years of study at Southern California Institute of Architecture (SCI-ARC), in 1988.

He says that his work in art, as well as architecture, is influenced by both Frank Gehry and the Morphosis architectural group in Los Angeles.  Prinz has taught as both an adjunct professor and visiting critic for the UNL School of Architecture. Somehow, the propensity to active movement growing up fits the physicality of his work…the large papers, the tearing and arranging…this is a man on the move.