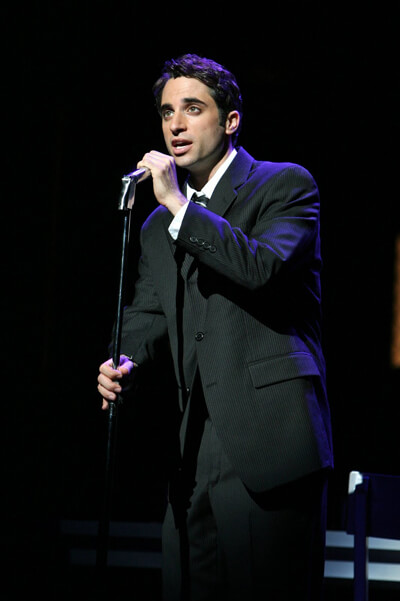 No one has been one of the Jersey Boys longer than Joseph Leo Bwarie, now into his fourth year as Frankie Valli. He’s appeared with at least five different actors as each of the other Four Seasons.

He keeps it fresh, thanks to audiences that go wild when the boys from the wrong side of the tracks make it big on every one of the more than 1,000-plus nights he’s played the iconic rocker. And it helps that he found time to record “Nothin’ But Love,” an album that inspired Jazz Times to declare him “a blend of Bobby Darin and Mel Torme.”

But, when you hear him as Frankie Valli during the next three weeks at the Orpheum Theater, he renders all 27 hits with the character’s more nasal sound, rather than that Darin-Torme combo of hard edge and velvet in his treatment of such standards as “Ol’ Devil Moon,” “I Can’t Give You Anything But Love” and “Night and Day.”

It’s his ability to become Frankie, and nail the hits that sold 175 million records, that wows the crowds. It helps that he looks the part, too, with his dark hair and smooth countenance, though at 5-6-plus he’s taller than Valli’s 5-4. Bwarie is so into the role that he was cast as “Frankie Valet” in the movie Race to Witch Mountain.

By birth geography, however, he’s more San Fernando Valley Boy than Jersey boy. He got his start at age 9 in studio sessions for Michael Landon’s Highway to Heaven television show, and still hears the theme song from Sherri Lewis’ Lamb Chop’s Play-Along humming in his head.

“I was very enamored of all of it. It was like a playground.”

He roamed from Lala Land, where he attended Catholic school, to Boston’s Emerson College (“to get away from my parents”), appearing there in Gypsy, Fame and as Tom Sawyer in Big River. Then it was back to California for work with Garry Marshall, helping the big-time producer and his daughters create children’s programming.

Marshall cast him in the world premiere production of the Happy Days musical as the Fonz’s cousin Chachi. That’s where legendary songwriter Carole King saw him and touted a new show in LaJolla called Jersey Boys. She was convinced he was born to play Frankie Valli and the rest is ongoing history.

Bwarie (the sound in “Buenos” and rhymed with “airy” or the Four Seasons hit “Sherry”) has since performed at the 63rd annual Academy Awards and the 63rd annual Tony Awards.

And you’ll see him on stage at the Orpheum for all but nine minutes of the two-and-a-half hour show. “There’s only one time that I’m off stage and don’t have a costume change.”

He looks at the show as an athletic event. “We’re really athletes on stage, running an obstacle course, a marathon.”

If you’re good at math, that means singing 162 songs each week, performing all 27 six times, with an alternate subbing for two shows weekly. He gets lost in Frankie, “and even my own relatives say, ‘We forget it’s you, Joey.’”

The touring show brings his widespread family closer together as cousins around the country see him perform. He’s the only entertainer in his immediate family, which includes a younger brother and sister, his mom (a second-grade teacher) and his father, (a pioneer in creating specialty gift baskets). He wasn’t completely escaping them in Boston because both parents had relatives nearby.

Omaha becomes the 51st city in his more than three years touring with Jersey Boys. And it’s not only his first time here, but “I’ve never ever been in Nebraska.”

During the three-week stay (all their visits around the country are three weeks or longer), “I have this notion I’m going to take tennis lessons.” He also plans to jog and visit the zoo.

If Omaha is anything like most of the cities toured by the Tony-award-winning musical, he’ll have us on our feet cheering, even before the boys completely seal the deal when they bring down the house with “Can’t Take My Eyes Off of You.”