Home » Art » Literary » Caroline, or Change is a triumph 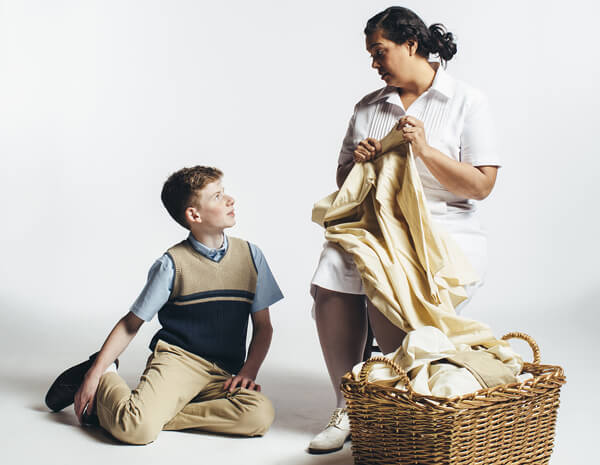 It’s hard to tackle Caroline, or Change, the powerful Tony Kushner musical, head-on. So forgive me for slipping into it sideways.

A week ago, it got a rave review by the daily’s Betsie Freeman. That was promising but not conclusive given that she liked Beertown, an imported play with possibly the worst script ever given feeble life on an Omaha Community Playhouse stage.

But I wanted to believe her this time. Then I ran into Bob Fischbach, the retired World-Herald reviewer, at the opening of Newsies at the Orpheum. After complimenting him on his recent feature about attending Caroline rehearsals, he explained that he loved it enough to plan seeing it again Thursday night.

So that set the bar even higher for my first look at Caroline the same night. At intermission, I wasn’t sure if it lived up to those two raves. After Act Two, I was blown away, positive I’d seen something so strong that I’d want to share my enthusiasm.

But I didn’t want to forget a few empty seats near me, seats that were occupied before the break. And I still wanted to understand the rather less-than-capacity Playhouse crowd, suggesting that neither review nor word-of-mouth was filling the seats. Here’s my best guess at what keeps a powerful story so bravely and beautifully performed from selling out, and my best hope that it will catch on and receive the attention it deserves.

I’ve never followed rehearsals as fully as Fischbach did for his feature story, but familiarity is a great advantage in appreciating a new musical with unfamiliar lyrics. Without that advantage, I struggled in the early going with songs from the Washing Machine and the three women representing The Radio.

Kushner didn’t do us newcomers any favors by anthropomorphizing washer, dryer and radio as Caroline’s basement companions as she does laundry for the Gellman family in 1963 Louisiana.

The one time that worked for me was when Caroline, the African-American maid, waits for the bus in her white starched uniform, and learns from The Bus that President Kennedy is dead.

Yes, there are learned explanations of the purpose served by these devices, but they are also distractions from the real people dealing with life and loss.

Suffice it say, Kushner and composer Jeanine Tesori do more than enough to make everything work so well that you’ll want to stand and cheer by the time it’s over. It helps tremendously that director Susan Baer Collins has Echelle Childers in the title role, and that compulsive alliteration requires quickly adding applause for a delightful Danny Denenberg.

He’s young Noah Gellman, who lost his mother and hasn’t bonded with his stepmother, but shares a daily puff on a cigarette with Caroline whose general anger matches Noah’s sorrow, camaraderie enough for the boy.

Echelle delivers all evening, both with vocal and lyrical clarity, on songs so weighty they’d be an unbearable burden if not soaring so beautifully. One only regrets that many fine performances the rest of the season will almost certainly be overshadowed by her triumph.

Her Caroline is a poorly-paid maid, divorced from a violent husband and left with four children. They’re played by Aguel Lual, eldest of the three still at home, with Wayne Hudson and Kundai Jacha as her brothers.

Their contributions, especially Laul’s vocal and acting chops, require mention that former director Hilary Adams did some prescient casting before her departure. Sarah Planck and Jerry Van Horn as Noah’s grandparents, Kimberly McGreevy as stepmother Rose Stopnick, and Joe Dignoti as her father round out a solid cast that includes Dotty Moffett who excels as Caroline’s friend.

Recall my apologies for side-stepping into this review. Having finally swept in most of the cast, I still feel a greater frustration than usual at failing to completely capture its dramatic force. So see it, and don’t let it bother you if you don’t connect immediately with singers representing inanimate objects.

You’re bound to connect with Caroline and Noah. It’s not easy to pick a favorite moment, but after they have a brutal falling-out, it’s fascinating to hear Noah sing about the “day, day, day” that she doesn’t come “back, back, back.”

Stick it out and be drawn back to 1963 and lifted by strong characters coping with change. And to think about battles still being fought.