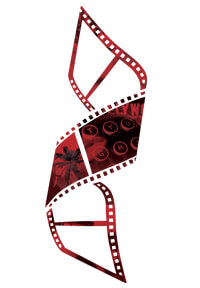 There comes a time when you need some good laughs, considering how you could feel as if you’ve been walking down a dark hall with your flashlight full of dead batteries. That could be when you take a load off your tired toes and squeeze into a seat at the Playhouse. Why not give yourself a break, pal, chortling or guffawing when you’ve a mind to, maybe giving those digits a little movement tapping along to jolly songs? Whaddya say? Settle in at City of Angels, the snappy. colorful film noir send-up musical by Larry Gelbart, Cy Coleman and David Zippel.

Scripter Gelbart gets it right, Raymond Chandler- style, throwing the spiffy spotlight on 1940s private eye pics. He goes that one better, in close-ups of smarmy guys behind Hollywood scenes, sitting like potentates on elephant backs hovering over peasants while trampling everyone in back lots which look like worn-out World War battlefields or tossing bon mots and shredded scripts into the wastebaskets of oblivion.

Huh? Oh, yeah. This is supposed to be a review. Writers. What you can do with them? They always think they’ve got something great to say.

A writer, Stine, is at the center of this opus. He thinks he’s got it all under control. Ding-dong. Hello there. Maybe not. He has been slogging on a typewriter, slugging out a tale about a shamus, Stone, in LALA land, hired by wealthy, glamourous Alaura to find her missing stepdaughter. Stone’s sleuthing slams him into police up to no good, into thugs with fists for brains, smashing into walls ending in alleys with no exits. Stine’s adapting his novel into a movie produced by many-hands-on producer Buddy Fiddler. Stine’s insecurities tie him into in all kinds of knots unknown to Boy Scouts. Then Stone becomes more than alphabet soup on pages, punching out a few ideas of his own. Got it?

Gelbart’s idea has a solid background in reality; some great novel writers almost sold their souls to get the big bucks churning out movie scripts of dubious merit. Later, he also pens a caricature of a talentless film score writer. Someone he knows?  And he has fun with the idea of a pop singer becoming a serious screeen star as did Dick Powell…successfully, by the way. Clearly this script has lots going for it. Another e.g.: every character doubles with a counterpart, like Stone/Stine.

Director Jeff Horger and his classy cast make it work. Isaac Reilly lays great foundations on which to make Stone: toughness and edgy vocalizing. As the siren serenading Stone into forgetfulness, Bobbi, as well as Stine’s sometimes estranged wife Gabby, Angela Jenson-Fey has the sound and the looks to wrap up both packages in shiny ribbon. Steve Krambeck nails and frames the portrait of Buddy to a fare-thee-well wall. And Samantha Quintana as Buddy’s secretary Donna and Stone’s, Oolie, shows she knows how to take a letter: A.

Horger pulls it all together, shaded and aided by Georgiann Regan’s imaginative costumes. The clothes match the reel and real worlds. i.e Life on screen where everything is black and white, color for the purple people who cause the cameras to spool and spin.  Jim Othuse’s stand- out sets do the trick.  And this cast sure as hell has the throats and lungs to make the most and best out of Coleman’s music while making Zippel’s clever lyrics zing.

This 19-person collective ensemble certainly does Michelle Garrity’s choreography to a nifty turn. Moreover, open your ears to the fine sound of the nine-musician orchestra led impeccably by Jim Boggess.

Caveat-time. How come the program book says nary a biographical word about the creators of this item? Hey! They all won Tonys for this.

Gelbart got another for Sondheim’s A Funny Thing Happened on the Way to the Forum plus an Emmy and a Peabody Award. TV’s M*A*S*H* is another of his prized achievements. So was his writing for Sid Caesar.  http://www.latimes.com/local/obituaries/la-me-larry-gelbart12-2009sep12-story.html

David Zippel came up with the lyrics too for Marvin Hamlisch’s songs in The Goodbye Girl and for Andrew Lloyd Webber’s in The Woman in White. Plus Disney movies including Hercules and Mulan. https://en.wikipedia.org/wiki/David_Zippel

This smasheroo, going back to 1989, ran three years on Broadway. It keeps on coming. Watch it and witness how well our town’s people populate it and you’ll understand. Grab your coat and get your hat; leave your worry on the doorstep.