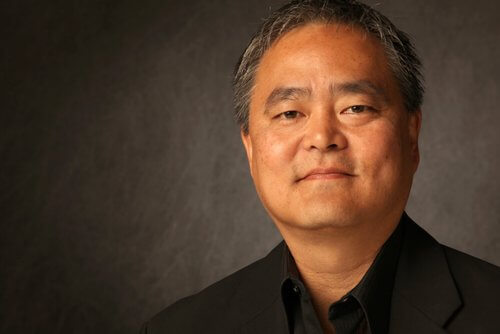 Mark Masuoka, former Director and CEO of the Bemis Center for Contemporary Arts since 2003, has accepted a similar position at the Akron Art Museum in Akron, Ohio.

Though Masuoka’s professional journey in the visual arts began in Las Vegas, Nevada, he has gradually worked his way eastward via Denver next, then Omaha and now the fifth largest city in Ohio with a metropolitan population of over 700,000, just 30 miles from Cleveland.

He says he feels his career is sort of “coming full circle” as he earned a Master of Fine Arts degree from the Cranbrook Academy of Art in Bloomfield Hills, Michigan. It was at Cranbrook that Masuoka and his wife, Debbie, an accomplished sculptor, first met internationally famous artist and mentor Jun Kaneko, the co-founder with wife and artist Ree Schonlau of the Bemis Center.

Their association later led to Masuoka’s artist residency at Bemis and his eventual 10-year tenure as director. But not before his gallery experience in Las Vegas and Denver and serving as chief curator and director at the Nevada Institute for Contemporary Art and the Museum of Contemporary Art Denver. During this period of about 30years, Masuoka has reinvented himself as artist, resident, curator and leader.

Though the Akron Art Museum conducted a national search for director, it was “Mark’s diverse experience as a leader, fundraiser, artist gallery owner and planner which brings new perspective to the museum’s management, “ past Board President Fred Bidwell said in a press release. “His visionary tenure at the Bemis Center marked by inspiring programming and dynamic growth promises many exciting possibilities for Akron.”

Which seems only fitting, because though once known as the “Rubber Capital,” Akron now calls itself, “The City of Invention,” a leading center for polymer research and development. Besides boasting an art museum known for its collections and exhibitions, the city is home to the Ohio Ballet and the Akron Symphony Orchestra. Yet, like Akron itself, the 91-year-old AAM knows it can’t afford to stand still.

“A primary focus will be to heighten the museum’s community engagement, increase accessibility and develop a new model for the next generation of art museum,” said current Board President Dianne Newman. “The board sees Mark’s appointment as a visionary way forward…by connecting the community to the artists and the creative process.”

Although Masuoka’s job description is to “fully understand and streamline management, create my own development team and be chief fundraiser,” he agrees AAM hired him “to take my experience and redefine the role of a museum that is more forward thinking.”

A key component of Masuoka’s vision and experience has been his desire to create a “collector culture,” by engaging the museum in the entire artistic process of an exhibition, from its incubation to its presentation and possible purchase.

Masuoka speaks proudly of how he and former Bemis Chief Curator Hesse McGraw were able to do so with such artists as Keith Jacobshagen and Therman Statom. They approached each and asked them what would they like to do and show that they had never quite done before, and then offered to have the venue and staff facilitate each. The results were Jacobshagen’s landscape painting installation, A Golden Year, and Statom’s glass and mixed media installation, Nascita, which not only exhibited there but evolved in the gallery as well.

Even though Bemis was unable to find a buyer for the entire exhibition of either, Masuoka believes that a traditional museum working directly with an artist will enable the final goal of acquisition by that venue.

“We have at the Akron Art Museum the opportunity to buy an entire exhibition,” he said. “We work with artists to facilitate exhibits, to fill the collection in this way, by investing in the artist’s career.”

This investment could include some sort of residency program as part of AAM’s new paradigm. “They’ve never done residencies,” Masuoka said, “but were interested in how to get involved, the ability to influence careers. That’s what got them excited. They knew my background.”

The growth of Bemis’ internationally famous residency program was a large part of Masuoka’s decade-long legacy. During that time, Todd Simon, Bemis board vice-president has said the venue, “grew up a lot, building connections to the community and local artists. He helped make Bemis one of the ‘go to’ places for great art in Omaha.”

While Masuoka will miss Omaha’s art scene and is “grateful to the many people who made it possible, as well as for the part Debbie and I played in it,” they look forward to taking up new residency of their own, July 15, back east, in a comfort zone professionally and personally.