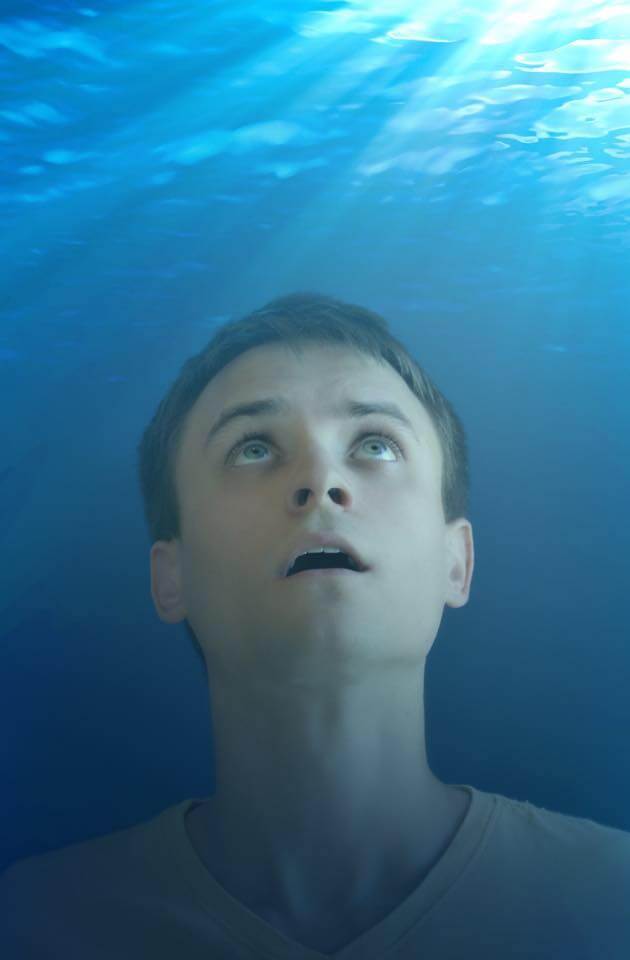 Blues Barn Theatre has opened its new season in a new structure, offering an imaginative play which, like the company, crosses time and space. Jordan Harrison’s fantasy,The Grown-Up offers fascinating permutations of reality, mingled with constant symbolisms. And it throbs with vitality thanks to Susan Clement-Toberer’s staging.

The choice of the 2014 script fits Blue Barn’s situation perfectly, given the shifting of perspectives, the delving into the past and future, in adapting to change and in moving to new territory.

As Harrison’s tale unfolds, what happens may at first seem chronological, yet the longer it progresses, the less linear it becomes. The complex picture requires immersion for the pieces of the puzzle to come together. But don’t think of the result as pushing you to seek profound insights. There is a stated premise, but you needn’t search for it. Just let the tale wash over you.

The elements:  A grandfather tells his 10 year old grandson Kai about a pirate ship from whose figurehead a doorknob has been fashioned. While playing hide-and-seek with his sister Annabelle, Kai turns the knob and finds himself on that ship to which he returns now and again. Other knob-connected transformations find him as a 20 something writer trying to pitch to a TV producer. Beyond, older, he lies abed with a gay lover. Then, still older, he’s about to be wed to a different man. In the final moments, he’s a crippled 88 year old attended by a nurse. Sometimes background, sometimes foreground, during all this, Annabelle keeps looking for him. A peripheral character named Rosie also pops in and out.

Clearly Harrison has loaded the trip with thematic cross-references, ones you might want to grab as they pass by. These clever elements don’t suggest anything particularly profound, nor need they. But recognizing them may make you want to pat yourself on your back, as if turning to look at yourself without a mirror.  A mirror, a mirror, a mirror. The game is afoot.

Clement-Toberer’s stage stays full of life using Martin Scott Marchitto’s set and Amy Reiner’s props. Together the three of these people impressively suggest a great playground. Another good dimension, given how everything springs off from childhood. Clement-Toberer makes dynamic use of every inch of that stage, even dramatically including the walls and back door. Her actors climb masts, hang from ropes, lie in corners, transform various-sized pieces of wood, open massive portals with swift ease and energy, all of this underscoring the idea that our lives inevitably rush by.

The actors in the six-member cast come across, validly, more as an ensemble than an array of distinctive performers. They double, and, as it turns out pointedly, also narrate. No character names are assigned, although Matt Karasek only plays Kai. He and Katie Otten as Annabelle excellently suggest childhood. Thereafter they remain mostly youthful, doing  little to suggest maturity or aging.  Such choices justifiably remind us that, as we get older, we tend to think that we are always the same people we’ve always been. Yet, inconsistently, Clement-Toberer has Otten eventually looking and behaving like a very old lady while Karesek’s Kai never altered. The other members of the cast are Nick Albrecht, Megan Friend, Nils Haaland and Jerry Longe. Each does well with everything. No virtuosity. None is needed. Surely, Clement-Toberer wanted it that way.

Given that there are so few scenes touching on big changes in Kai’s life, Harrison somewhat diffuses the potential with a couple of gratuitous scenes dwelling on other people, most especially in a seemingly long monologue by Rosie. There are a number of minutes in the 75 or so in which this takes place which could have been better spent.  And time is apparently what Harrison wants to contemplate, suggesting, albeit not all that directly, that we need to treasure what we’ve got in our finite lives.

Certainly the new Blue Barn space should be treasured. And so should Clement-Toberer and all her company for coming up with such a place to experience live theatre. And to experience in it a play which challenges us to think.