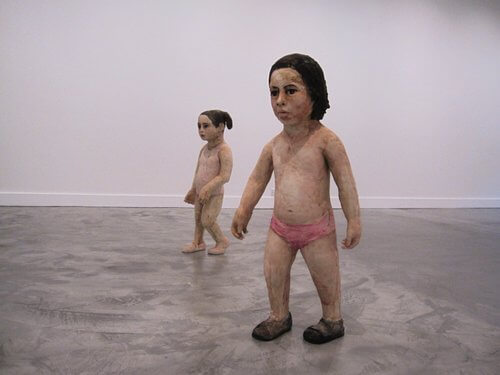 Entering the Metropolitan Community College Gallery of Art and Design, one finds it peculiar as to why the walls are not full of artist Claudia Alvarez’s familiar, figurative two-dimensional work of children in watercolor and oil. After all, the large wall space provides ample opportunity to show-off her expressive ability on paper and canvas in Alvarez’ current show, History of Immigration exhibition up thru April 9.

Instead, the New York and Omaha based artist features clay figures as her chosen medium in this impressive exhibit. On the floor is a ceramic girl crouched over 51 ceramic shoes. Two other ceramic girls “walk” toward the back corner of the gallery in “Adelante.” A little brown cowboy boot with a hole in the sole lies on the floor where the girls are headed.

The focus is on the little girls’ shoes. Single, without matches, they are arranged around the girl in the direction toward the back of the gallery. The girl isn’t smiling or frowning. One hand reaches out to a shoe. One wonders, is she searching for hers or a lost loved one’s? Is the narrative positive or heartbreaking?

Looking closer at the shoes, the story ending still isn’t clear—some appear new in shiny reds and yellows, laces or buckles in tact. Others appear worn, laces torn, lumpy, even a mold-like hue to some. Each has its own story, and we don’t know what the girl is searching for or what she will find.

This was indeed Alvarez’s intention with the show: “I depict images of children as means of expressing a more innocent, vulnerable aspect of human survival. Although initially they may seem to present themselves as narratives, my hope is that they be interpreted in various ways and seen as a metaphor.”

The open-endedness of “Adelante” reflects the complexity of human survival. The two girls in pink, both with shoes on, brown hair and eyes, expressionless, move toward the back of the gallery, the old brown cowboy boot.

The cowboy boot could perhaps represent Alvarez’s own reach for American ways as she immigrated to the US at age three from Mexico. The used-form of the boot could be a grave look at what immigrants are here for—is the American dream really there?

It is understood now why the walls are bare here; the focal point on the girls, the questionable backgrounds and futures is exceptionally moving.

Also, Alvarez’s craft ability is quite impressive in the ceramic work. Paint drips and brush strokes are manifest. The ceramic is painted in affecting hues and surfaces palpably worked with the artist’s hand as she enjoys exploring various approaches to mediums.

Still, we do get a taste of the California College of Arts in San Francisco graduate’s two-dimensional talent with just two paintings hiding around a corner in the back of the gallery.

“Immigrants” a large water-based oil paint on canvas shows a formal portrait of a family—a mother embracing a baby, four young children and perhaps a grandmother. They look straight out, mostly serious expressions, as if communicating with the viewer. All of them have brown hair and eyes like the ceramic girls, a nod to Alvarez’s personal story, but still the story is universal to immigration. Will it work out?

A tiny portrait of a young girl in the very back of the gallery, also brown hair and eyes, could be anyone’s sweet girl, “Green Card” is the title of the facial portrait of the somber child; reminiscent of portraits of children in the 19th century who weren’t typically shown smiling. Alvarez’ though, unlike the early portraits, paints a beautiful child with a pink barrette, shirt and lips to match. She’s full of hope, but her eyes say, will I get it?

This is the beautiful complexity of life as well as Alvarez’ work. She exhibited a small part of the shoe series in 2010 in Wildly Different Things: New York and Dublin, a group exhibit at Blue Leaf Gallery in Ireland in 2010. This exhibit at MCC Gallery is her first solo show exploring the issues of assimilation, displacement, tolerance and compassion as it applies to her own story and the story of all immigrants.

“The exhibition is not an attempt to describe, explain, or tell the story of the history of immigration, rather its intention is to open a more intimate dialogue to question, respond to, and re-look at immigration in groups of people throughout the world,” said Alvarez.

Claudia Alvarez: History of Immigration will be on view at the Metropolitan Community College Gallery of Art and Design, 204th and Dodge in Elkhorn, through April 9. For hours visit mccneb.edu.