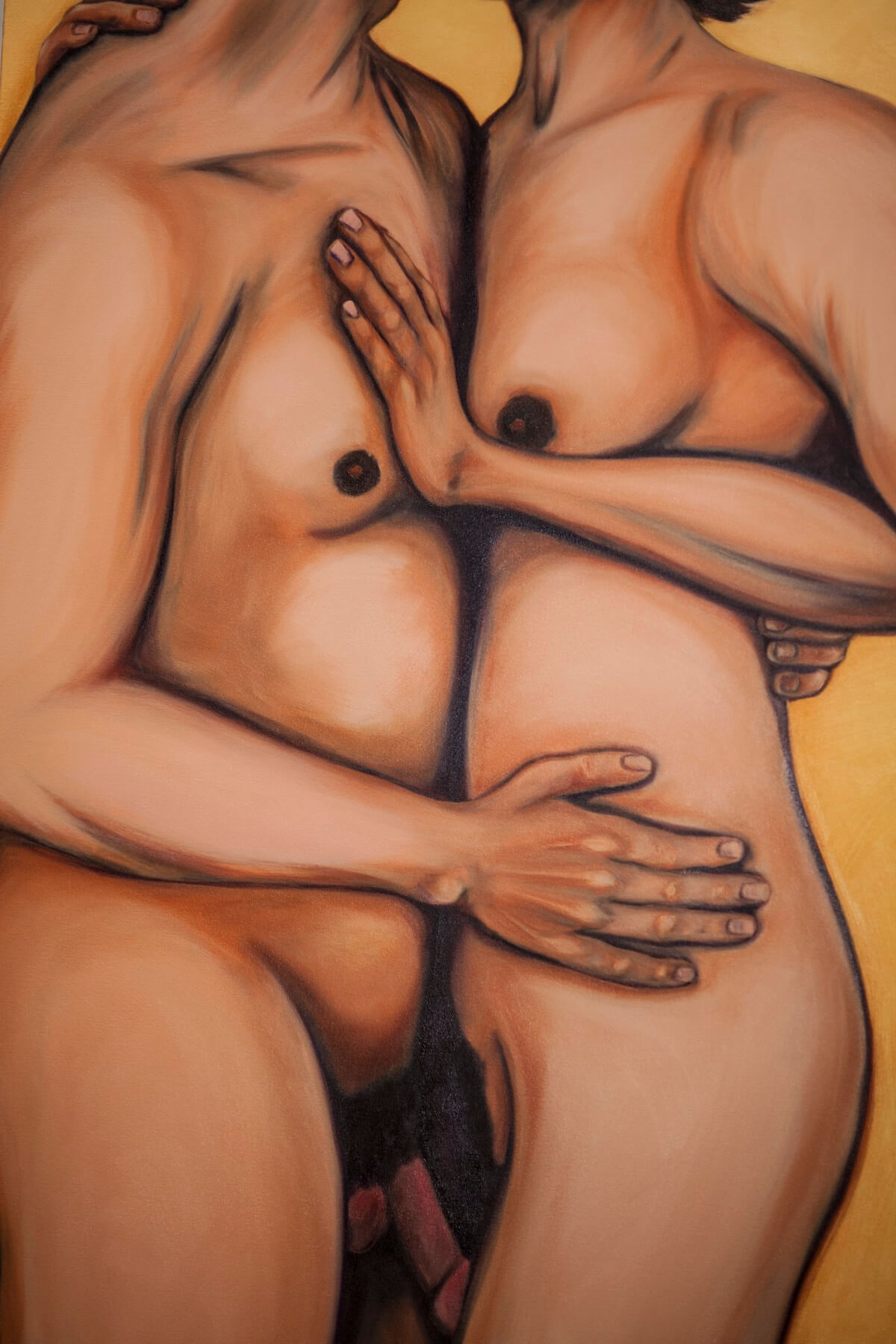 It is to be commended that the Artists Cooperative Gallery present a show of completely new work by a trio of artists on a distinct theme. The Old Market Gallery, around since 1975, as of late has been perhaps silently snubbed by the local arts scene for its rumored same-old-same-old, unprovocative shows.

The situation is not unbelievable, with a jury of artists in the same roles in the member-gallery for years, maybe decades, to get stuck in habits of rotating artists without large regard for outside perspective—whether that’s the local community or contemporary art world in general.

Still, the Gallery states on the website: “We strive for personal artistic growth and professionalism in presentation.”

So, the current exhibit, bare: NAKED TRUTH, on the theme of the nude figure by member artists Travis Apel (sculpture/drawing), Lori Elliott-Bartle (painting/printmaking) and Dar Vande Voort (painting/sculpture), shows a step forward, but also, has a lot riding on it.

The centuries old exploration of the nude in art is nothing new. For this reason, and for the gallery known for its conservative art shows, it is a testing choice.

A year ago, young member Apel bravely posed a question to the membership—who wants to join me in a show with all new work on nude art? Two artists—Elliott-Bartle, known for her brightly colored representational oil work; and Vande Voort, known for using puzzle pieces as texture in her surreal portrait paintings, expressed interest. Over the past twelve months, the trio created.

The outcome proves extremely disparate yet interesting perspectives on what “nude” is in art. Sometimes pleasantly provocative, sometimes perhaps excessively calculated; overall a good show, with a want for editing (various other members contributed works on the theme intermittently throughout the gallery along with regular work).

Welcoming gallery-goers is Vande Voort’s “Peeler and the Piece” and “Lost Cause,” two smaller paintings alongside a large-printed poem on the show title.

The duo perhaps greets viewers because of their simplicity in comparison to the rest of the show. Vande Voort’s sense of humor and craft ability is best exhibited in “Piece of Mona” and “Posture and Pieces in Red,” larger paintings towards the end of her row of work.

“Piece of Mona” is a notable rendition of the famous “Mona Lisa” portrait with the star bare-breasted adorned with a puzzle-piece necklace. The playful personal nod to the artists’ trademark medium, along with the historical reference to the da Vinci piece, nudity in art, and women in art (or was it a man?) makes this piece pop.  Too, “Posture and Pieces in Red,” a woman in a rich royal purple tutu (said to be painted after an image by local photographer Jim Ferguson) displays intense chiaroscuro reminiscent of early periods, with an expressionist flare of brush stroke and fierce glare of the model.

A few others on the theme are notable—“Nipple Pieces I and II” utilizing her puzzles for the nipples, showing her craft ability with painterly details down to the blue veins. Others lose sight in either the theme—like the random “Mr. Potato-head” painting—or surrealistic tendency—like the gaping “Push Me” portrait of a head with a hole, a ladder, various colored eyes. Nevertheless, they are fun, and true to the artist’s dreamlike perspective.

Elliott-Bartle’s series, however, does not veer. Her nine paintings, all in the same palette of primary colors, focus on the same two figures (one male, one female) throughout, almost all the same size.

The narrative is enjoyable to follow, almost as though you are watching through the lovers’ window. The passion of the artist with her story is evidenced in the accentuated line quality and intensity of hues. Her intention was utilizing the body’s “touch” to espouse emotion; and in that way she was successful.

Standouts are “Cry,” a horizontal piece with sinuous dark lines following the curvy lying mid-drift; too, the composition is elegantly balanced.  “Kiss,” the couple embracing (the only piece in the featured show exhibiting a representational penis), displays emotion with just a torso, as well—the hands, genitals and legs—are affectionately achieved—with her color choice and romantic narrative, the result normalizes the nakedness rather than shuns it.

Two possibly self-portraits are shown; one enticing “Burn” with fingers covering the face conveys troubled sentiment. The other more friendly, with the face contentedly leaning on the hand, seems to say, “I did it; this is me, take it or leave it.”

Some may not have been as intriguing outside of the series—though, perhaps was her intent. It may have been worthy to get a peak at the studies for the series; did the artist have sketchbooks or photos she painted after?

The poem written by the artist “Offerings” provides a little insight into the personal background to the series, but as a visual exhibit in a visual art gallery, it would have been perhaps more complementary to experience it likewise.

This might be most exemplary in “Patri-dish” a cylindrical, steel off-center sculpture with a petri-dish holding printed words like “respect, produce, yield, obey.” According to the artist, the piece is a satirical caricature of patriarchy—which, it seems, many of his are, although not always explained as such. In the work at hand, the plastic Petri dish and paper words distract from the rather interesting abstract form—it reads almost as a quite pleasing as a public art piece.

“Domestication,” of steel, stone wood and hardware with chains and locks inscribed with various words like “strife and drudgery” is seriously compelling on site without artist’s verbiage.

It is also deep and dark with the theme of entrapment—as are “Boobie Trap,” “Wrestlers,” “The Cell” and even his self-portrait “On Trial.”

According to his statement, Apel used the nude theme “as metaphor” for liberating his personal skeletons. His “naked revolt yearns to strip oppressive strata that cloak [his] growth.” Such is hauntingly revealed in  “Boobie Trap,” a plastered female breast trapped in a steal cage; the inspiration “from something an eight year old boy said” seems innocent, but the result is distant; are we being kept from the breast? Or is the breast being kept from us? And why?

“Wrestlers” shows headless male and female figures physically struggling for the upper hand, it seems, with the female pinned below. Again, the message of entrapment is slung via his skillfully crafted limestone. “The Cell” shows an egg shape tightly entrapped in striking marble in the form of a male torso with steel bars surrounding.

The message is “oppressive” in the least. With the female symbol consistently being the ensnared (breast, egg, female form), one might wonder, is this extreme sexism being visualized? But perhaps it is expressing the artist’s own entrapment–his self-portrait “On Trial,” a graphite drawing after a photograph by Rachel Ogborn, shows the bare-chested artist with gruff facial hair, physically straining with chains around his neck, pulling at something unknown.

Apel also put out a book of various nude sketches, a testament to his craft ability and to his appreciation for the theme at hand.

The rest (and majority) of the gallery is full of other members’ work—sparingly, nude-themed works are up to accompany. A few prove interesting like a series of mysterious photographs by Dale Shenefelt, an acrylic torso by Dale Macafee and an enchanting young figure on glass by Bob Schipper.  However, unfortunately, the mass of the members work as per usual, detracts from the main show.

With such a well-kept, vast gallery space, it might benefit the artists’ hard-work (and the gallery itself) to utilize it—give each piece room to breath, take-in and appreciate.

In all, the show is refreshing; bare: NAKED TRUTH opened up the potential for the often-overlooked gallery and gives the question artists desire—what’s next for them?

The Co-Op is currently taking application for its Emerging Artist Program open to artists with no history of professional gallery consignment within a 75-mile radius of the metro area. Deadline October 7. Details artistsco-opgallery.com.

Bare: NAKED TRUTH runs thru Sept. 30 at the Artists Cooperative Gallery, 405 S. 11th St. There is a closing reception at the gallery Sept. 29, 6-9pm. artistsco-opgallery.com.