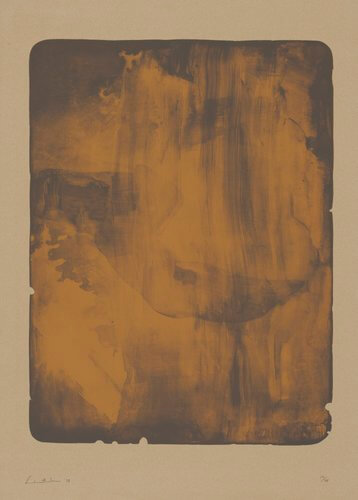 Jordan Schnitzer has a museum named after him in his hometown of Eugene Oregon. His private print collection (of over 7,000 prints–the largest in the United States), includes work from renowned artists Andy Warhol, Chuck Close, Jasper Johns, Robert Rauschenberg, Edward Ruscha, Roy Lichtenstein, Kara Walker and Kiki Smith, to name a few.

His prints, “collected to share” with public institutions around the nation, also display his deep appreciation for contemporary art as evidenced in a show featuring his collection currently at Joslyn Art Museum until Jan. 6. From feminism, to minimalism and pop art, an array of styles and genres are presented, all produced since 1960.

It begins provocatively as one enters Under Pressure: Contemporary Prints from the Collection of Jordan D. Schnitzer and His Family Foundation exhibit and is flanked by Lorna Simpson’s “Wigs” installation of about a dozen felt prints of various hued and styled women’s hairpieces. Delicately crafted, the intent is humbling, as we question our stereotypes of even the back of people’s heads.

Feminism continues to be a strong theme in the exhibit with similarly heavy pieces by Kara Walker, Barbara Krueger and Ellen Gallagher. Each challenges the status quo of society: Walker with race and gender through her superimposed shadows of slaves atop old-fashioned-southern-styled illustrations that challenge history; Kruger’s series challenges stereotypes using the same media that perpetuate them. Gallagher takes on media, race and gender with her cut, collaged and hand-painted pages of Ebony Magazine.

Schnitzer believes feminism is a major part of contemporary history and art history: ”…there are these external and internal expectations and values for women’s own identities; ‘where do I fit?’; and these artists who happen to be women and maybe African American women, force you to deal with it by showing their own personal search for identity…”

Pop-art is another strong theme in the exhibit, as with the work of Robert Rauschenberg, Roy Lichtenstein, Jasper Johns and Andy Warhol. Johns and Rauschenberg were among the earliest artists to integrate printmaking into their practices.

Rauschenberg’s “Signs” (1970), says exhibit curator Karin Campbell, “testify to the visual and conceptual fluidity in his practice among sculpture, painting, and printmaking.” Also, they give light to many recognizable people and happenings of the 1960s, as Schnitzer enthusiastically points out—Janis Joplin, JFK, Martin Luther King Jr., Vietnam soldiers and more—making it an educational as well as art piece.

Roy Lichtenstein’s “Bull Profile Series” (1973). as well as being a series of pop art, also exhibits the mutability of the print as medium, making it ideal for extended series like this one. The recognizable black and white illustrated bull becomes a totally abstracted primary colored image of shapes through five prints, allowing the viewing experience to become longer and more significant for its process.

Abstract Expressionist Helen Frankenthaler’s “Bronze Smoke” (1978) and “Japanese Maple” (2005) show the variability of the medium as well as the artist’s career development.  One of the later pieces by contemporary artist Hung Liu, “The Last Dynasty: Countess” (2009), showing a realistic young girl dressed in traditional Chinese garb, also shows the versatility of the medium with a bright colors, almost seeming to fade in and out along the gaping space.

Narrative work like Enrigue Chagoya’s “The Pastoral or Arcadian State: Illegal Alien’s Guide to Greater America” (2006) draws heavily on art history and global politics. Judy Pfaff’s “End of the Rain (a)” (2000) also seems to tell a story with a photogravure of a fenced-in home with two large trees, bottom-lined with negative illustrations of home plans.

Vija Celmins’ “Ocean with Cross #1” (2005) explores texture with a screen print on a Rives BFK Textured Rag paper of an image of ocean water, allowing viewers to slow down and contemplate surface and environment.

Schnitzer’s favorite in the show, he says, is a simple piece by Robert Bechtle of a 1961 car parked outside an apartment made fully appreciable by the space of the Joslyn Art Museum.

The exhibit, which includes work by thirty-nine artists, traces these and more major currents in the art world, as well as developments specific to printmaking, addressing how print rose to prominence in postwar American art.

Schnitzer decided to collect prints for their complexity and importance in art history as it has shifted over the last fifty years, but also for their affordability and ability to travel and be shown to the masses. As he describes it, he “collects to share,” and hopes audiences from age “zero to a hundred” come to the Joslyn exhibit of the “best and brightest art masters of our time that can be seen on the walls of major international museums.”

Under Pressure is on view at Joslyn Art Museum thru January 6. December 13, an exhibit-inspired presentation, “Framing the Flame: Art That Ignites” includes talks by Bridgette McQueen, founder of The Union for Contemporary Art and Adrian Duran and Wanda Ewing, art professors at University of Nebraska-Omaha. Joslyn.org.