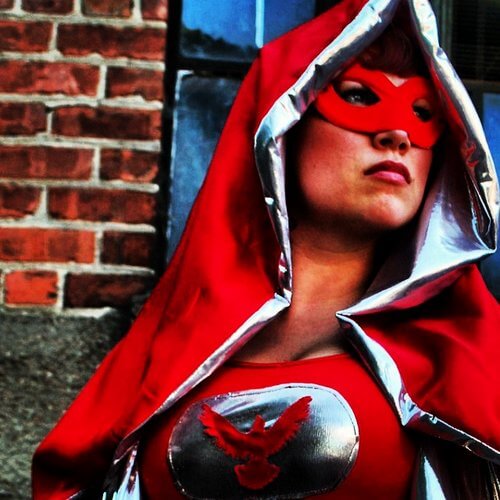 Crash! Boom! Pow! promises comic book action, but its earlier reading at a theater conference had the audience saying, “I don’t know how you’d do this onstage.”

That didn’t stop director Ben Beck, who co-wrote the play with Molly Welsh, from tackling a Shelterbelt Theatre production opening Thursday, July 12. He’ll present Red Dove, a super-heroine who flies, an ordinary guy named Benny thrown into a comic book world, and cope with these and other stage directions:

“A giant robot crashes through wall” and “The room explodes into noisy, chaotic oblivion.”

Beck and Welsh are “voracious comic book readers” who “raided our own shelves and shelves” of comics and hung out in comic book shops, talking to guys behind the counters “with encyclopedic knowledge,” guys who aimed them at “new stuff, old stuff, ‘you gotta read this stuff.’”

Benny’s “comic book flight to reality” begins when “he buys a ticket from a mysterious man so he can escape ‘the abyss of total meaninglessness that I know lies just beneath my feet.” Benny (Matt Karasek) not only encounters the high-flying laser-shooting Red Dove (Jackie Kay), but runs into wolves, boogeymen, cicadas and robots.

As for connecting the rest of the 10-member cast to characters, “Those two are the only ones I can give away.” Could Teri Fender transition from Streetcar Named Desire’s Blanche Dubois to victim,  villain or super-hero?

Beck teases with the hint of a villain who “is a weird amalgam of Edgar Allen Poe, some Batman villains and a real person named Albert Fish.”

The playwrights found Fish, a serial killer whose picture “scares the snot out of you,” while “messing around on Wikipedia.”

Welsh and Beck were inspired by the work of playwright Charles Mee, who argues that there is “no such thing as an original play,” but everyone writes based on their own understandings and interpretations of the works of others. Mee encourages writers to draw freely on his plays.

The Omahans, starting the process four years ago, made their own superhero story by drawing on Mee, all those comic books, fairy tales and their favorite movies.

And he credits a lot of other positive reinforcement from such directors as the Blue Barn’s Susan Clement-Toberer and Playhouse resident director Amy Lane, who taught him directing at the University of Nebraska at Omaha. “I took several classes with pages and pages of notes from Amy Lane,” he added.

In other words, “I’m not sitting at home thinking how in the hell to do this.” Ben and Molly knew casting their superhero would be tricky, given both the emotions and the physical requirements of the role, but when Jackie Kay appeared at auditions, “Molly and I both perked up.” They said, “Lets see how she reads, and then got more and more excited” about a person they’d never seen before. Their Benny, Karasek, is best-known for his work at Creighton University.

The challenges of staging Crash! Boom! Pow! were first fully explored over a three-hour lunch with designer Matt DeNoncour, who came armed with drawings and sketches. “We talked about how to accomplish the effects on a stage that size where the audience is five feet away,” Ben recalled.

“If you were a cute little kid, how would you try to fly?” Maybe “you’d get up on a ladder.”

For the rest of the wall-crashing robots and epic battles between villain and super-hero, enough said. Just show up at the Shelterbelt.