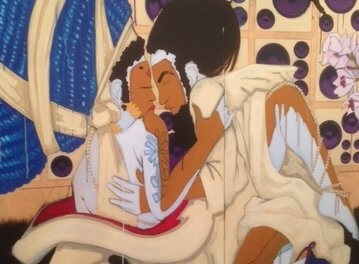 Beauty and love conjure up a variety of emotions and feelings.  They capture passion and mix with both sensuality and power.  However, beauty is constructed and shaped by culture and society.  Within this context lies a conundrum of what power and beauty say about us as a civilization.

This is the context of iROZEALb, the inaugural show at Joslyn Art Museum ‘s new gallery, the Riley Contemporary Art Project (CAP). The exhibit features Brooklyn-based artist iROZEALb who questions these themes in the most tantalizing way.

“My first degree is a BS in Kinesiology,” the artist said in an interview. “I really have always had a love of anatomy.  So, right now I am interested in depicting couples and their mutual respect and gratefulness for one another.”

This 500 square foot space in the Scott Pavilion allows internationally, nationally, and emerging artists to showcase their work.  This is the first Joslyn gallery dedicated to living artists giving them a platform into contemporary art.

iROZEALb’s strength lies with her skillful use of paint and color.  Her subjects are a cross between that of Japanese geisha and a video vixen found in the hip-hop culture.  Painted almost ethereal in nature, these women are of a different and astonishing persona.  They are beautiful and thought not to be easily attainable, even though the revealing and near-nude poses beg otherwise, a contradiction the artist says is natural.

“It just comes out.  I am not in control because that is not what art is about,” iROZEALb said.  It’s not about being in control.  But when you’re not in control then it does what it wants to do and you sort of set yourself up to put yourself out there, and it is a very vulnerable place.  This work is about a lot of pain and a lot of love that hopefully you get at the end of the pain.  So I am still in the middle of the pain, but I can project and hope for the love.”

There is another theme within her paintings and that is the Biblical story of King Solomon.  There are many references to this story within her work.  iROZEALb’s paintings are expressive and ornately embellished with the trappings of materialism, which in the story is the fall of Solomon.

“The Reunion (Song of Solomon 5:10 – 11)” is a pictorially breathtaking image of two figures embracing.  Both figures are draped in a white fabric while a strand of pearls encircles her body.  The man who has a samurai hairstyle is also decked out in purple high tops with red laces.  A tattoo of a panther paw is peaking out beneath the fabric.

The woman hair is wrapped in bright blue and she has a tattoo of a flower running down her arm.  They look as if they are on a black fur rug that adds so much texture to the piece.  The background has what looks to be speakers (a nod to hip-hop) that are painted a deep purple and black.

Epic in size and romantic in nature is the painting “Listen + Listen = The Silence of Oneness.”  It is done using a multitude of various blues with white and bright gold accents that pop of the silk; plus this work was created on-site at the Joslyn, something iROZEALb has been doing for a while. The drips are still visible as you walk to this exhibition.

“I have been fortunate enough to have this exhibition at the Joslyn, whereby the first piece in this series is on display, as well as the most recent” she said. “It¹s a rare opportunity, a great one.  I also try to do as much research as I can before I complete the work, from the imagery to the titles.”

The painting’s costume is Asian-inspired and the protagonist’s hands are gently touching and who seem to be listening with headphones connected by what looks like prayer beads.  There is a tranquility and calmness to the piece.  However, judging by the expression on the faces of the figures, they are influenced by the voice in the headphones. It is as if though living in the past, they connect it to the present and future.

Complementing the other pieces is “Majesty” where the woman depicted is exotic and bejeweled.  She appears somewhat indignant, but very much in charge.  She is leaning into a man adorned in black fur wearing a purple baseball cap with a gold falcon on it.  His long braded black hair is embellished with blue beads gazing at the lovely woman wrapped in pearls that she is clenching in her mouth.

Her black hair is piled up and her back can be seen covered with a swan tattoo.  Her playfulness to her mate showcases the power her femininity has on the opposite sex.  She is on a white fur rug with only one glittering red high heel shoe slightly exposed.

This show leaves little doubt that strength and beauty extend far beyond culture and norms.  The clash of cultures that pride themselves on defining what beauty is which always seems to be changing.  iROZEALb gives us a glimpse into a body of work that is both thought provoking and stunningly executed.  It allows the viewer to simultaneously explore and distort the boundaries of beauty and power.

“Life inspires me. I¹m doing a bunch of things at once right now which is too much to speak of, but hopefully soon there will be more to come!”