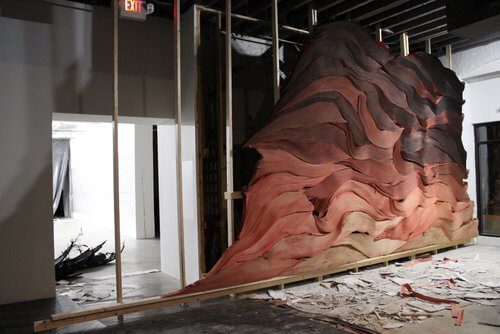 Jarrod Beck knows how to make his exhibit look so disguised yet powerful one might confuse it for a construction site upon entering the Bemis Center for Contemporary Arts. Strike Slip is a series of manual installations that stretch across two entire galleries in the Bemis. The project began May 16 and will continue through August 31. It is different every time the public comes to see it.

The viewer can only go off what they see that day. No matter what that is, the installation may always resemble any one of Bemis’ recent renovation projects in some stage of teardown or demolition. Beck said sometimes he visits Omaha to change the exhibit, but he also gives instructions to those he works closely with. “I have a story in mind but the work remains abstract.”

The exhibit expands from the outside loading docks inward. Closest to the wall is a series of vertical “curtains” cut like streamers and made from white paper. The strips are splattered with ink while a massive black tarp hangs in front of these papers. It creates a T-shape, leaving the rows of inked paper separate from the exhibit. It almost feels like a meat locker back there.

At the beginning of this process in May, the papers were placed under the tarp with ink in between. People were invited to basically trample and step on the tarp so the streamer-like papers gained a realistic splatter. This gives Beck’s work more credence and intrigue because you get the feel it’s an interactive project. Viewers can move across the ripped floorboards and step behind the massive curtain to feel the ghostly isolation. As of very late July the massive tarp extended downward onto the gallery floor being pulled and tied into three distinct clumps.

In between the two galleries is a massive row of what once were tires. However, the tries have been shredded and stretched across the wall in massive piles. Close to it are dyed plastic bags tightly wrapped in giant squares on loading carts. Beck said, “I like using materials that have undergone a change of face.”

Fallen dry wall is common on the far gallery along with transparent panels standing in front of the windows, perhaps implying a deeper meaning. The North wall looks like ocean waves and is made from paper as well. Beck does an excellent job of crossing the spectrum of reds. The bottom of the “wall of waves” has a very light pink touch while the top exudes a deep scarlet color. The entire second room has floorboards ripped up and unearthed. There are skeletons of wood paneling between you and the windows outside.

The viewer certainly may need to take a few walks around the gallery before even beginning to interpret meaning, but that’s not necessarily a bad thing. Beck’s work implies a theme of progression. After spending some time there, one begins to feel the changes that have occurred since May. Beck is getting at something more complex than broken floorboards.

Beck started out as an architect before he began doing spatial work. He definitely knows how to construct and deconstruct. Strike Slip gives the feeling that something massive has occurred and there is rebuilding to do. There’s the empty feeling you get behind the curtain.

The tarp being stretched forward and tied down gives a feeling of oppression. The colored plastic bags are wrapped so tightly on the crates it almost gives a feeling of suffocation. The second gallery is partly in ruins and panels between you and the outside also give a “caged” feeling.

Strike Slip is unlike anything the public has probably seen before. It welcomes the viewer because you walk over the art, under it and behind it. It does feel like something has “progressed” as the months have passed. Strike Slip at first may just feel like the galleries are being redone and refurnished. Maybe that is part of it. However, there’s art there. It’s more than art too. It has a life of its own and may challenge your prior beliefs since Beck uses objects like the tires to question new purpose. There’s no telling what it will look like by the last day of August.