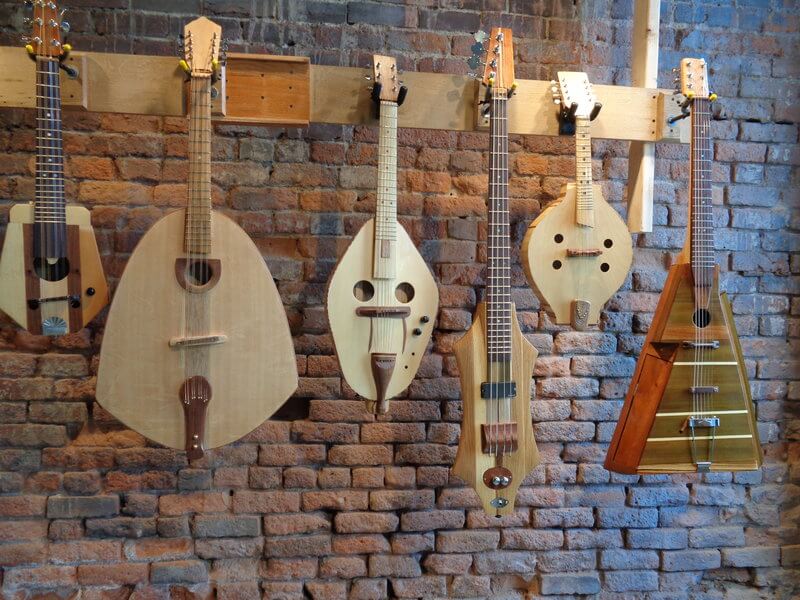 Marchio is showing handmade musical instruments, and Giron features two-dimensional experiments benefitted by a bonfire. Giron’s title: “On the Brighter Side of Post-Apocalyptic Minimalism”.

Marchio has achieved a high level of both sculpturally accomplished and playable works; one-of-a-kind guitars, violins, mandolins, cellos, kalimba, even a harp.

Moving from log to board to finish, or using salvaged woods, he has managed to present visually expressive and innovative works that deserve to be hung as art on walls, as well as played.  Each piece is beautifully realized, with a seemingly limitless choice of woods and configurations to a logical end.

At 50, Marchio decided to try learning to play the violin, to the dismay of the family’s pets, and finally decided that perhaps if he built a violin, he might better understand how to play better. Now, he is committed full time to the production of violins, mandolins, and other related string instruments built with an emphasis on playability, but also with each instrument sculptural and individual.

A graduate of Creighton University’s sculpture department “back before it was really a department,” Marchio moved from large steel and wood pieces to making instruments after graduation.  Having played accordion as a child, then guitar since age 16, he continued playing music, performing liturgical music for over 30 years, and composing music, while working in information technology.

Giron’s work in this exhibit is a return to a process he used in graduate school.  He begins with various sizes of previously painted Masonite or luan substrate, which often consisted of abandoned or unfinished paintings that have hit a dead-end at some point.

The next step is to glue various kinds of Ukiyo-e prints, Tarot or religious cards he calls the “bingo of life,” in a grid on the canvas to establish an underlying form.  When satisfied with the various additions to the composition’s balance on each board, he throws the artworks onto a bonfire, to blacken and randomly disrupt the underneath order.

Giron then scrubs any loose parts and sands the works. After a period of studying the result, he then may add lettering or work color back into the piece, until he feels a new composition has emerged from the meditative process of slight changes and quiet consideration.  Remnants of the images will remain among the destroyed and reworked parts.

The best example of this process, “A Smaller Trinity”, hangs just inside the first room of the gallery.  Giron sees this process of moving between order and randomness a good way to initiate a “spiritual search” in troubling times, while calming to create.

And he says that he believes that art will have a role in helping people move into the future.  A graduate in art at the University of New Orleans, Giron earned a Masters’ Degree from University of Colorado at Boulder.  He teaches art at Metropolitan Community College and designs and paints murals in Omaha.