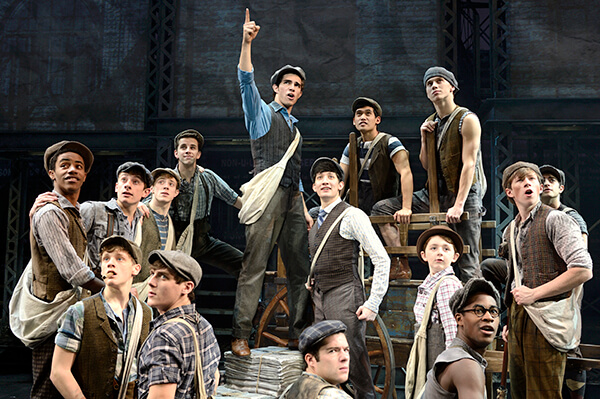 Newsies is the perfect antidote for musical theater fans who were disappointed recently by Dirty Dancing. The one with dancing in its title offered minimal dance variety, tediously repeating the style of its opening number.

The Disney show now playing at the Orpheum never fails to delight when the New York news boys, circa 1899, fly into athletic action, flipping and twirling with energetic gusto. Rarely is an audience so responsive to dancers, cheering both ensemble vigor and individual stunts.

Fortunately, their story is appealing enough to give meaning to the exuberance and physicality of the dancers: they’re kids battling for their right to make a meager living by selling newspapers for that journalistic giant, Joseph Pulitzer.

Sure, it’s an oversimplified battle between good Newsies versus evil corporate power. That requires a hard-hearted Pulitzer, not the publisher who vowed in his day to “comfort the afflicted and afflict the comfortable.”

But at its best the boys show enough revolutionary zeal to remind briefly of the young men manning the barricades in Les Miserables. No, it’s not nearly that heroic, but it manages to be earnest without becoming too hokey.

After one praises the Tony-winning choreography, there’s room to honor the casting of lads who look young enough to be street-tough news boys, but strong enough to be believable crusaders. Inevitably, crowds may find the most joy in 11-year-old Ethan Steiner, as Les, the scrappy kid who holds his own with the teen-agers.

Steve Blanchard, the most seasoned talent on stage, looks enough like Pulitzer to satisfy those who’ve seen him in history books, and Kevin Carolan provides a plausible Gov. Theodore Roosevelt, the progressive pol who backs the boys.

More important, Joey Barreiro as Jack Kelly, the brash leader of the strike against the media tycoons, has both the voice and looks to be a convincing crusader as well as the love interest for a pert reporter named Katharine. Played by Morgan Keene, she adds a nice helping of feminity while publicizing the newsies’ cause, and she pops an identity surprise that spices the story line a bit.

Two other newsies, Zachary Sayle as Crutchie and Stephen Michael Langton as Davey, credibly support the leads, with Crutchie contributing a touch of pathos and Davey balancing Jack’s brashness by articulating the boys’ cause.

Disney’s Oscar-winning Alan Menken composed the music with lyrics by Jack Feldman, and though none of the songs are that memorable they serve the spirit of the show. Jack’s opening ode to his dream of leaving the city for “Santa Fe” is more wistful than rousing, but the likes of “The World Will Know” and “Seize the Day” serve more as battle cries for the boys.

Second only to the energetic choreography in serving that revolutionary fervor are the settings, especially the transformative use of an erector-set tenement with stairwells and openings that provided platforms for the ensemble. Based on earlier reviews of the Broadway production, I’m guessing that what worked in New York has been redesigned closely for touring.

This true story of news boys striking for fairer treatment was first a Disney film in 1992, then an honored Broadway show twos decade later with book by Harvey Fierstein.

When I first heard it would become part of this Performing Arts season, I wasn’t that excited. So it was a pleasant surprise to see such an appealing production, one that’s easy to recommend to all ages.