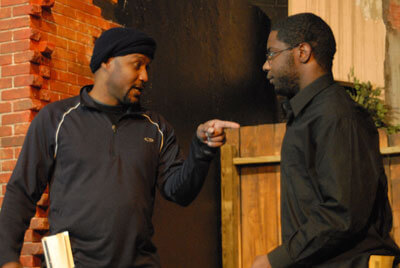 August Wilson never ends with a whimper, but goes out with a bang. And, again in King Hedley II at the John Beasley Theater, he goes to God through a Bible-quoting character named Stool Pigeon who preaches of glory over another fallen black man. As always, the great playwright adds to our understanding, not just of an African-American ex-convict in 1980s Pittsburgh, but of the timeless human struggle to find honor and dignity amidst adversity. As is often the case with this company, Tyrone Beasley in the title role plays the more troubled man, a grim counterpart to his father John’s Elmore, who wears life’s burdens more lightly. So it is with their women, Elmore’s love Ruby (Marci Holley) and King’s wife Tonya (Gennean M. Scott). Ruby can still smile and sing, “Red sails in the sunset,” despite the violent death of her husband, but Tonya is desperate to survive without losing her man to prison or worse. All four deliver powerful, sustained performances in this nearly three-hour drama. They’re well supported by guest artist Bus Howard as Stool Pigeon and especially by the easy style of Dayton Rogers as Mister, the young man who helps King raise money so they can go into business. They’re selling stolen refrigerators at $200 a pop and hope to open Royal Video, “specializing in Kung Fu.” King can’t get a job after serving seven years for shooting a man named Pernell who “called him out of his name” and scarred him with a razor. Tyrone’s King Hedley sizzles with intensity, angry over his difficulty in acquiring money that seems to come easily to white men. His more relaxed friend Mister is willing to take risks for financial gain, but tries to keep King from more dangerous directions. And both women work to keep their men alive. Ruby can hope for happier times with the sporty 66-year-old Elmore, but Tonya will settle simply for survival. As for Stool Pigeon, he wants to know what newspapers can tell him about what’s happening, and about when God will bring fire, not flood, the next time. Howard gives him a halting speech, sputtering a bit, whether talking about the death of Aunt Esther, who he insists was 366, or burying a cat in Ruby’s yard. With this production, the Beasley has presented nine of the 10 Wilson plays focused on each decade of the 20th Century, with the final one, Radio Golf , planned next season. None have disappointed and King Hedley II is no exception. It runs through March 27 at the LaFern Williams Center, 30th and Q. Autistic License It’s 10 minutes before the start of Autistic License and a vaguely familiar face in the lobby belongs to a woman texting on her phone. “Are you Stacey?” the nosy reviewer asks, and she smiles affirmatively. Stacey Dinner-Levin came down from Minneapolis to see again — “I can’t count the times,” she says — her play about raising an autistic child: the early confusion, scary diagnosis, then all the joys and sorrows of living in interesting times. She sat beside director M. Michele Phillips, her friend from a book club. Michele had attended one of the triumphant times, Geordy’s bar mitzvah. And she greeted Michal Simpson’s performance in the SNAP! Productions play with hearty laughter as he progressed from a 2-year-old who could read the Sunday newspaper ads, from the toddler who exclaimed, “Bob Barker,” and “Come on down” and “a new car” to the 7-year-old who ran away in a red fez, disguised as the invisible man. She enjoyed the boy and his younger brother in top hats, dancing with canes and singing “Putting on the Ritz” ala Gene Wilder and Peter Boyle as his friendly Frankenstein monster. Then she watched him becoming a man as he recited Hebrew at his bar mitzvah. We watched with her as a lifetime of parenting ups and downs unfolded: meetings with a psychologist, played superbly by Therese Rennels (Don’t you love it when a talented performer disappears completely into a well-written character?), angry curses from her husband as their son renames his computer files, sharing with support groups, rushing to the emergency room over a swallowed marble. You wonder how she feels when Echelle Childers portrays her best and worst, and when David Mainelli shows her husband’s anger as well as his love. She’s seen her husband play the boy on stage and she’s seen her son play himself. But, make no mistake, playgoers didn’t need the playwright’s presence to find joy in her story. One could quibble about some artificial exposition — such as facts about autism revealed in a lecture device — but any flaws were heavily outweighed by the realistic family scenes. The John Beasley Theater’s King Hedley II runs through March 27 at the LaFern Williams Center at 30th and Q, Thurs.-Sat. at 7:30 p.m. and Sundays at 2 p.m. More information at johnbeasleytheater.org. SNAP Productions’ Autistic License runs through March 27 at 3225 California St. with showtimes at 8 p.m. Thurs.-Sat. and 6 p.m. Sundays except for the 2 p.m. final performance. More info at snapproductions.com.