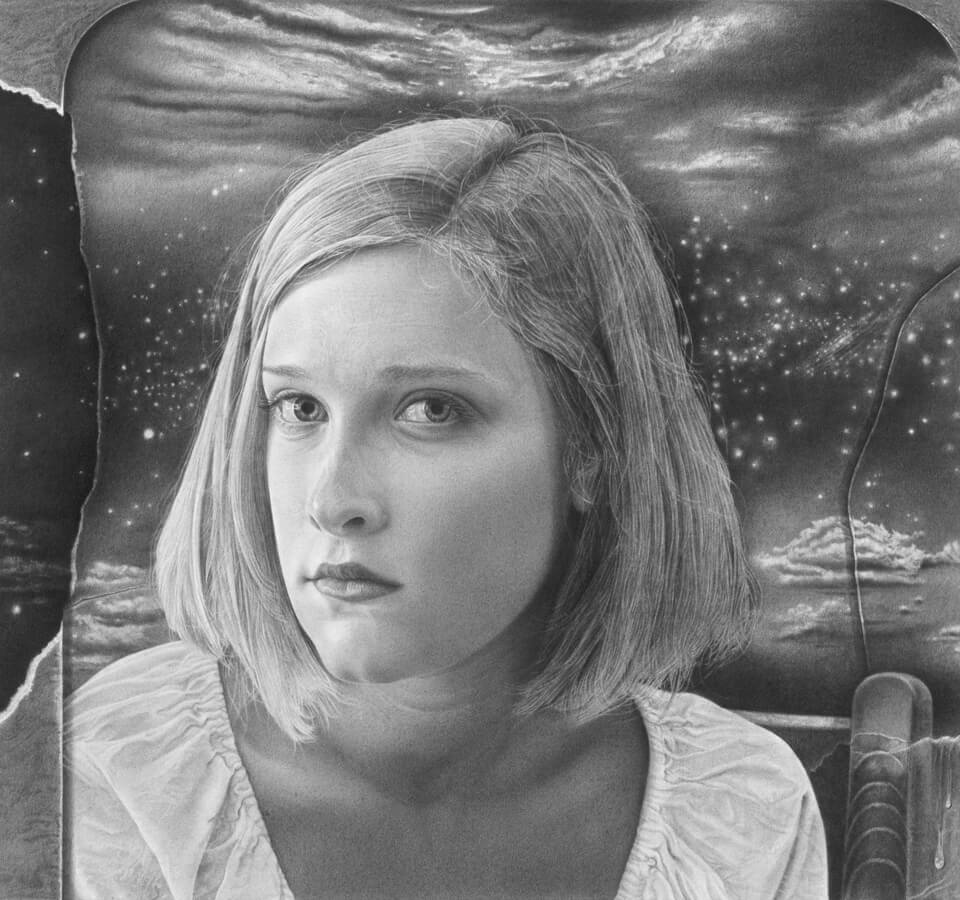 Most of us are happy to remember bits and pieces of our dreams long enough to share them soon after awaking.  We usually struggle with words to convey their bizarre settings and strange characters.

Paul Otero, photorealist and graphite artist, has not only long term recall of his dreams, but also the exacting artistic language to communicate hallucinogenic, yet realistic, details on paper. In fact, he has made a career of it, for more than 30 years.

Dreams: Drawings, a solo showing of Otero’s visions in the last decade at the Fred Simon Gallery until September 18, impresses with its quiet, mystical beauty.  His subjects, mostly feminine, spanning in age from infancy to elderly, invite the viewer to take a closer look into their eyes, to examine the relationship the subjects have with their cosmic backdrops, and to explore the mystery of their expressions.

Particularly fascinating is “Incarnate Mystery: The Black Halo.”  One has to question the exposed ear on this portrait of a nun, who is clearly, physically attractive.  What does she hear?  Who is calling her?  Her rosary, draped at her throat, is a necklace of prayer that falls out of the context of the drawing onto the white matte border. Has a secular chant mesmerized her?

Another pencil drawing, “Flesh and Dreams: Stella,” is the result of Otero’s encounter with an elderly woman, who, with cane in hand, was walking down the street in Pender, Nebraska, when Paul passed through years ago.  Always on the prowl for intriguing subjects, he stopped to photograph her.  Her initial refusal to his request morphed into consent on the condition that Paul would return the next day and take her to lunch.

She kept her word and appeared the next day in her Sunday best.   As they left her favorite bar and grill, he caught her image in ideal lighting.  His straightforward rendering of this woman includes her image framed in an arched window, which is curiously appointed with a hanging key, a keyhole, and a small box on its sill.

The fine creases and textures of the surrounding wall mimic the character-rich lines and wrinkles of Stella’s face.  Wispy, white threads of hair that escape her coif reveal an attention to detail that Otero celebrates.

Otero’s multilayered images incorporate complex backdrops. “Dreams Know Mysteries: Seen in the Unseen,” a more recent work, gives the feeling of a celestial photo booth. The female subject, a composite (Otero’s subjects are often altered from the original), stands poised in the lower third of the drawing against a backdrop of panel doors, some open, others closed.

Above, hangs an angel, again female, gloriously feathered, beautiful and smiling. In the shadows behind her a mountain range rises to a bright palace, suggesting an eternal home. Lower and in the distance, oceans, maybe clouds, churn.   Moving onto another plane, yet cast in dark shadows, a cluster of feathers provide counterbalance to the glowing light of the benevolent angel above.

Unifying the piece, an undulating ribbon marked with vertical bars of light, reminiscent of a musical score, invites the viewer to hear the “visual music.”  In the foreground at the very top of the frame, a white curtain, loosely gathered, threatens to drop over this dreamscape in the morning light.

So, what fills Otero’s kit of surrealistic dream effects?  Mostly those added points of sparkling light, often interconnected with webbing, sometimes showering down a dark sky, or swirling in glass globes or reflecting like mirrors.

To convey competing dreamscapes, torn paper edges are added to distinguish time or place. With controlled use of pressure, he uses his pencil to create fine screen-like overlays to express a state of transition. Symbolic pearls and hummingbirds hint at the inherent treasure of his subjects.

Otero credits many of the Renaissance masters as his influences. Michelangelo and Raphael with their hazy edges, plays of light, and religious figure depictions, lend him inspiration. Albrecht Durer, as well as the Dutch painters, have left their mark on his work, certainly fueling his appreciation for classic beauty.

A master at describing his craft, Otero characterizes the line as a beam of light on an infinite plane moving into space with only the artist’s pencil point to arrest its journey. What appears to others as long, tedious days of eye-crossing focus, Otero embraces in the way of Zen.

Step into Otero’s dream world.  There’s plenty here to intrigue the imagination and feed the soul.