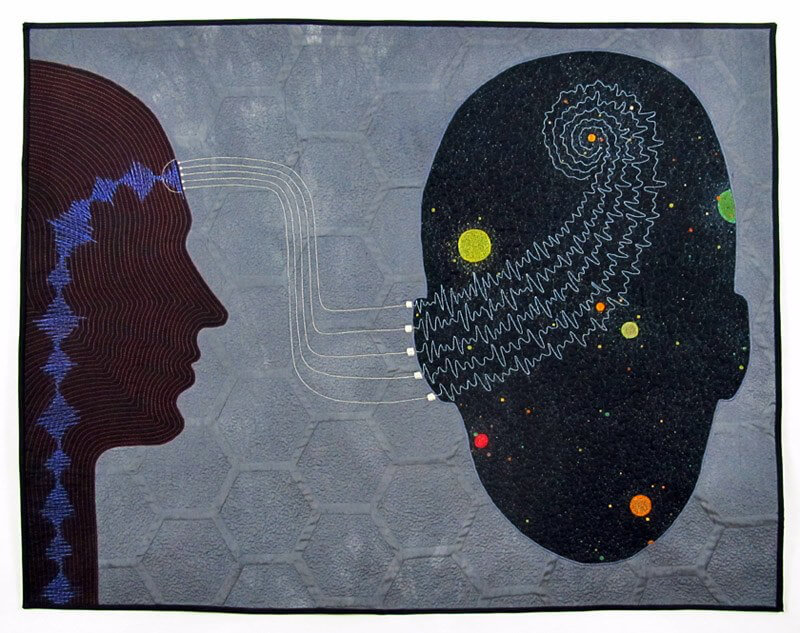 As both book and movie reached the status of cult classics, the many fascinating threads of Dick’s concepts emerged: How is empathy measured? What are the implications of artificial intelligence? What would its integration with human life look like and how would it function? What are the effects of bioengineering on all aspects of society? When the “natural order” is overturned, what become of human values?

As an artist long interested in life forms from the cellular to the extra-terrestrial, it is perhaps no surprise to see Shea Wilkinson find inspiration in this source material. In her solo show Homo roboticus, currently at the Fred Simon Gallery at the Nebraska Arts Council HQ through June 24, Wilkinson shows off a new series of sixteen art quilts musing on the confluence between biology and technology.

“The idea that someday the human body and mind is going to be integrated with technology is no longer science fiction,” Wilkinson says in her artist statement. “We are advancing technology to mimic biology, integrating our knowledge into ourselves and artificial intelligence systems.”

The agricultural industry, for example, is already modifying the genetic structures of plants in order to produce seeds capable of withstanding everything from drought and disease to herbicides.

In an effort to stem the global plague of the Zika virus, scientists are building in population control devices into lab-altered mosquitos. And 3D-printable human organs hold the promise of amazing medical interventions.

This is all real science happening right now. And it set Wilkinson to wondering how close we are to Dick’s world, and what the coexistence of man and machine may look like and how far it may take us.

The products of Wilkinson’s inquiries are pictorial textiles made through free motion quilting, which means that she determines and controls the flow of thread and direction of the material through the machine, rather than it being pulled through by mechanical teeth or guided by programmable stitches. The result is that Wilkinson has to think a bit like a sewing machine and it, in turn, must submit to her will of eye, hand and brain.

The exhibition opens with “Ersatz Cat”, a kind of charming nod to cute kitty quilts on the one hand, and an opening statement of Wilkinson’s wider curiosity on the other. A cat lover herself, she wonders how it would be possible to replicate an animal so graceful, yet so complexly individualistic.

This cat is an electric blue and its tip-to-tail skeleton of circuit board-like linear patterns fill in its silhouette. It strides against a black background filled with radiating circular waves and a spectrum graph of an imagined cat’s purr.

Most of the shows works, however, revolve around complicated human/android relationships. “Transfer Complete” is an excellent summation of this merger of opposites.

Two silhouetted heads face each other. Each shares an identical face, but the cerebral cortex of the one on the right is filled with circuitry, where the other’s is filled with a filigree network of blood-filled arteries.

The opposite is true of their cerebella. They stand out against a textured lilac background filled with the capital letters GACT—the human genetic code—as well as large 0s and 1s, the binary code that are the building blocks of computer instruction.

Similarly, “Mental Networks” conjures an image of a telepathic connectedness, as sound waves travel between the forehead of one figure and the ear of another whose facial features are replaced with a galaxy of planets and stars.

It is up to the viewer to wonder in which direction this communication ultimately flows. The quilted hexagonals of the background are references found throughout Wilkinson’s work to the structure of organic compounds, as well as that of honeycombs; here she also equates it to the idea of a “’hive mind’ which one might imagine existing among all artificial intelligences on the same network.”

While these pieces are an extension of the provocation of Dick’s original novel, there are several works later in the exhibition that are more directly related to Wilkinson’s reading of the material.

With its silhouetted outline of a ewe with a circuit-board network forming her eye and mid-section, “Counting Sheep” is an homage to the original jacket design for the book’s first edition. Its background, a binary code field of 0s and 1s, brings a new meaning to the title’s play on the calm, sleep-inducing mental game.

Even without the storyline that unifies the works in this series, it is simply rewarding to trace the intricacy of Wilkinson’s threadwork, her approach to color, pattern and texture as vehicles for narrative subtext. Her medium of, essentially, drawing in thread segments is well suited to these illustrative, diagrammatic renderings.

In a landscape currently littered with dystopian fiction, Wilkinson’s vision of a coexistence of man and machine is measured and thoughtful, sometimes playful and occasionally cautionary. Her approach seems to spring from a place of passion and wonder about life; after all, as Dick said, “mankind needs more empathy.”

Homo roboticus: Art Quilts by Shea Wilkinson continues at the Fred Simon Gallery through June 24, 2016. This Nebraska Arts Council gallery is located on the lower level of the Burlington Building, 1004 Farnam Street and is open Mon-Fri from 8am-5pm.