Home » Art » Literary » Durbin’s Back as Tartuffe for Brigit 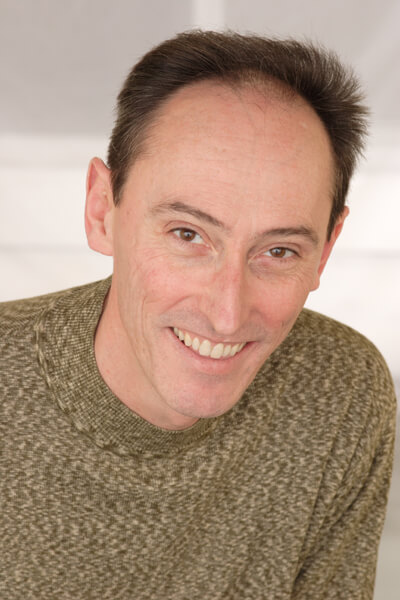 John Durbin sat on stairs that descend into Joslyn Castle’s music room, as handsome a setting as you’ll find. He’s fresh from months in Hawaii with George Clooney and two dozen others he cast in Alexander Payne’s new movie, The Descendants.

So he’s housed once more in Council Bluffs, where he was born as John Jackson, his name when he’s not on stage but busy casting films for Payne. He started with Citizen Ruth and Election before About Schmidt, Sideways and now The Descendants, which premieres in the actor’s current home base, Los Angeles, this week.

He’s back with Brigit and director Kurz, performing for the company where he starred in such plays as Beckett’s Endgame and, most recently, The Little Foxes. It’s a fitting reunion, considering that the company has found a temporary home in the Castle after several seasons sharing the Downtown Space with the Blue Barn company.

Durbin did Elwood P. Dowd of Harvey fame in Brigit’s early days at the Joslyn Museum and played other roles for Brigit in Bellevue and at the College of St. Mary (Google still thinks Brigit is housed at the girls’ school) and finally in the Old Market.

The new partnership with the Joslyn Castle Trust “is especially nice for Tartuffe,” set entirely in the house of a wealthy family, Kurz notes. Those stairs where Durbin sat talking will often serve as entrance to the room below, a symphony in honey-colored satinwood, with latticed treatment fencing an upper balcony and distinctive lighting below the stained glass over the stairs.

Actors will stroll onto the set, dialoguing as they arrive in the music room with its little Juliet balcony flanked by matching steps. Sarah Joslyn often ate breakfast on the larger opposite balcony while organ music played below in the room given her prior to 1910.

When the drama, which begins at 7 p.m., ends in just under two hours, playgoers will be invited to eye the other Castle rooms and join a wine and cheese reception prepared by the Castle Trust partners.

But the play’s still the thing, and Kurz cast talent well-suited to supporting Durbin’s religious hypocrite. The play opens with Mme. Pernelle (Charleen J.B. Willoughby), mother of Orgon, the master of the house, chastising other householders for their lack of respect for Tartuffe, who she sees as a paragon of pious virtue, the holiest of men.

When Orgon (Eric Salonis) returns home, the others try to inform him of the illness of his wife (Marybeth Adams), but he worries only about the welfare of Tartuffe of whom he’ll hear no evil, despite the grave doubts of other family members.

The cast includes such Brigit regulars as Laura Leininger, Eric Grant-Leanna and Jeremy Earl, who plays Valere, Tartuffe’s servant. Veteran actor Scott Working is joined by two newcomers to the company, Erika DeBoer and Brendan J.D. Reilly from the University of Nebraska at Omaha.

For Durbin, whose movie experience began with a bit part in Arnold Schwarzeneggar’s The Terminator, the role offers “the challenge of just how much of a villain is he? Is he just a hypocritical manipulator or does he really believe this stuff?” Whatever else he is, Tartuffe is eager to seduce Orgon’s wife.

With so many choice portrayals to his credit, Durbin says, “Now that I’m in my 50s, I see all these roles that I’d like to go back to now that I’m older and know life more.” While most of his Omaha appearances have been with Brigit, one of his most difficult experiences came in the Blue Barn’s Quills, when he played the Marquis de Sade completely nude on the cold stone floor of the drafty old Burlington Railroad depot.

He makes his living primarily from his casting work with Omaha native Payne and others, including a Hallmark Hall of Fame film for television. “Alexander is talking about two more future films” that Durbin anticipates.

As for The Descendants, “From the time I read the book and the first draft of the script, I always made my feelings known—Clooney, Clooney, Clooney.” But he adds, “By no means was his hiring my decision.”

He played a larger role in casting the other 25 speaking parts. Why so many months in Hawaii on his first trip to the islands? “You have to find the people, really striving for a sense of that community. And Alexander likes me to be there for pre-production and filming.”