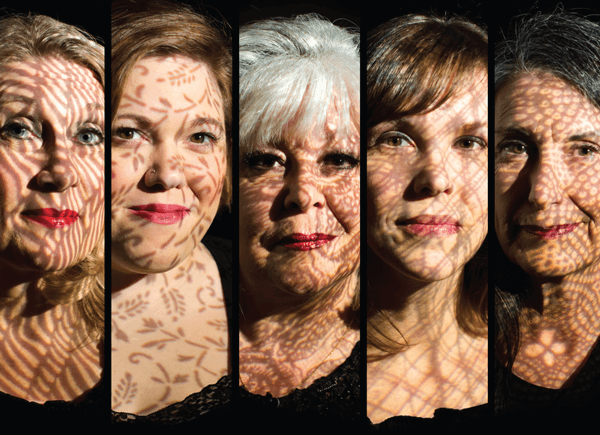 The male usher smiled when I handed him the ticket and suggested that my gender would leave me massively outnumbered in the audience.

At intermission, it’s not unusual to see a long line outside the women’s restroom, a shorter one for the men. But for Love, Loss, and What I Wore at the Omaha Community Playhouse the men’s line did not exist.

After an evening where the few men present learned a lot about the intimacies of women’s clothing (who knew how some prepare panties for a conjugal visit to prison), I feel the need to share male non-intimacy: we do not converse while standing side-by-side at urinals.

So I didn’t speak to the only other man in the restroom. In the lobby, however, he picked up on what I wore, which happened to identify me as a Denver Broncos fan. He confessed to being a Kansas City Chiefs fan who would root for the Broncos against the Patriots who’d beaten his team.

I mean, what are guys going to talk about between acts discussing such pauses on life’s journey as buying the first bra or how one hates one’s purse. I was there to write a review and because Nora Ephron was involved in the writing of this staged reading and because I was pretty sure it would be highly educational.

For World-Herald reviewer Betsie Freeman, it was highly “relatable.” For me, the relatability was obvious when the women in the preview audience, many invited by lead sponsor College of Saint Mary, laughed at incidents that left me puzzled. If you missed it in print, read Freeman online and you’ll get a better picture of its relatability than I can provide, despite being accompanied by a wife who disappears frequently for passionate bouts of shopping for the items that preoccupied the five women on stage.

Oh, I got most of it, thanks to fine performances directed by Amy Lane. Charleen Willoughby carried the main narrative line as the quintet sat on stools on the Hawks main stage. As Gingy, who survived a series of divorces in varied attire, she illustrated her life’s clothing with sketches.

Teri Fender and Judy Radcliff got the most laughs from “what I wore” incidents ranging from poignant to hilarious, but both Sonia Keffer and Caitlon Mabon had their fair share of big moments.

Early on we get a mom telling daughter, “Wear your leggings or you’ll get polio,” and most of the humor is the sort of delightful stuff coming from a not-yet-developed girl getting her first bra to the comic antics of store dressing rooms.

(Remember when the ditzy Corky in TV’s “Murphy Brown” accidently peeked at her newsroom boss in a dressing room and exclaimed, “I saw Miles’ weiner”?)

Men, I’m sure, can actually relate to some of it. When Radcliff obsesses about the disappearance of her favorite shirt, I recalled my favorite green flannel shirt that my wife generously handed to the shirtless crack addict who knocked on our door in the middle of a blizzard. I last glimpsed it in the back seat of the police cruiser that hauled him away.

It was easily as entertaining as it was educational. For me, Act Two briefly became offputting when one character after another focused on dysfunctional lives full of divorce and f words. But I’m glad that kind of content didn’t keep College of Saint Mary from supporting a show with much more to commend it.

Most of the stories of love and loss give meaning to what they wore. And if I lost focus at any point in this review it’s probably because my love kept bouncing into my office modeling the dresses she picked up the day after she saw the play.