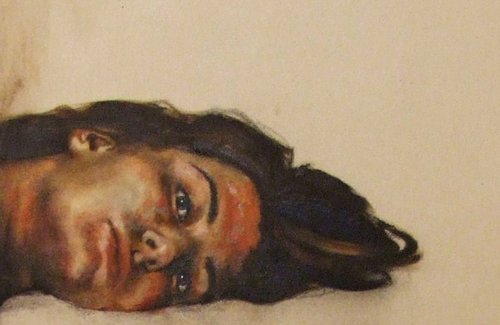 Viewers might recognize painter Rebecca Herskovitz’ expressive and large images of women reclaimed from contemporary magazines in her one-night-only solo exhibit, “looking at you looking at me,” at Hoover Studios September 7.

Herskovitz’ exhibit is the second in the recently opened studio by Omaha based artist Bill Hoover in the Mastercraft Building. The artists met while working together at The Kent Bellows Studio and Center for Visual Artists so the show is particularly significant to both; She is also especially thrilled to show a new body of work that builds on her previous series.

“In their original context, the female subjects were photographed by men with the intention that they would be viewed by men,” said Herskovitz, the  2010 recipient of Omaha Entertainment and Arts Award Best Emerging Artist:  My work then seeks to re-interpret these images and to elicit questions about what it means to be a woman in our society—whether we are object, subject, artist, or viewer.“

“This body of work engages in a search for the specter of true intimacy, as well as an exploration of false intimacy in a world of online profiles, abbreviated digital connections, and ever-briefer answers to ‘How are you?’”

For example, in the title piece, “looking at you looking at me,” the large oil painting of a seemingly spent female face lying down, staring at the viewer, both challenges and connects with the gaze of the subject.

Her artistic process begins with one such image—a face, a body, a person—that provokes her intuitively.  She translates the “strange sense of connection with a photograph into a painting that can hopefully do the same for the next viewer.”

Though Herskovitz enjoys hearing various audience interpretations of her work since figure painting tends to be a personal venture for artist and viewer, via her artist statement, her paintings are meant to create a “relationship between the viewer and subject, and potentially the viewer and artist, such that we may move beyond voyeurism; rather there emerges a continuous mutual gaze…”

Participate in the gaze Friday, September 7, 6-9pm at Hoover Studios in the Mastercraft Building, 1111 N. 13th St., Suite 120. Thereafter for the month, the exhibit will be up by appointment. Billhooverart.com.