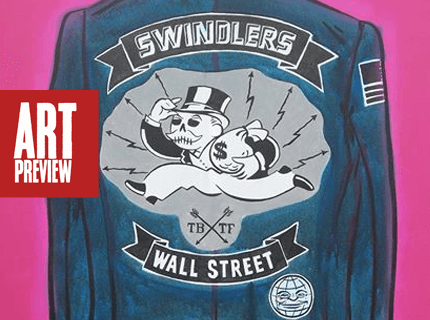 Spring is nearly here, and for the Benson scene that means more art shows, thawing vomit puddles and larger crowds for their monthly Benson First Fridays celebrations. So, wash those pretty eyeballs of yours and plan on more regular participating spaces to be opening their doors this March featuring new art shows from around the region.

As usual, next-door neighbors Sweatshop and Petshop Galleries have come out in front of the pack with a pair of exhibitions that already look to be two of the most intriguing and well-organized shows of the year so far.

Leading the way is a group exhibition at Sweatshop Gallery featuring the work of Angela Drakeford, Carolyn Falkner, Sara Sumnick Wamsat and Millee Tibbs. Titled deviance teaches; charm will make you sick and curated by Alex Priest, the text on this exhibition leads one to believe that this show will hold surprise after surprise within its work. It’s not every day that a show compares its work to the Trojan Horse and with the multiple uses of the word “horror” in reference to the work’s subtext, plan on spending the evening expecting the unexpected.

The exhibition continues as evidence of Priest’s curatorial investigation into mixing Omaha’s often segregated art communities and looking for exciting new works in usually looked-over studios. Given the premise of the exhibition, the participating artists along with a mixed bag of practices and the show’s talented young curator, deviance teaches; charm will make you sick looks like one not to miss.

Another show to look out for is Ben Swift’s The 1%ers at Petshop Gallery. Swift plans to exhibit new paintings, prints and objects that imagine a world where the fat cats of the financial industry wear their affiliations as proudly as Hell’s Angels.

“The 1%ers doesn’t stop at simply prodding the super-rich of Wall Street, but also other industries and power structures that exhibit the qualities of corruption and arrogance,” Swift says in his show statement. “As much as The 1%ers series is a critique of culture and power, it is also a tongue-in-cheek exercise in pop-art, and meant to make people think, and perhaps be amused by the relationship and similarities between the extremes.”

Based off of the promotional image used by the gallery- a blue suit coat back covered in patches boasting the wearer as a swindler and featuring a skulled-out Monopoly Man, this exhibition looks like a seriously good time poking fun at two groups of criminals in our country from both ends of the spectrum.