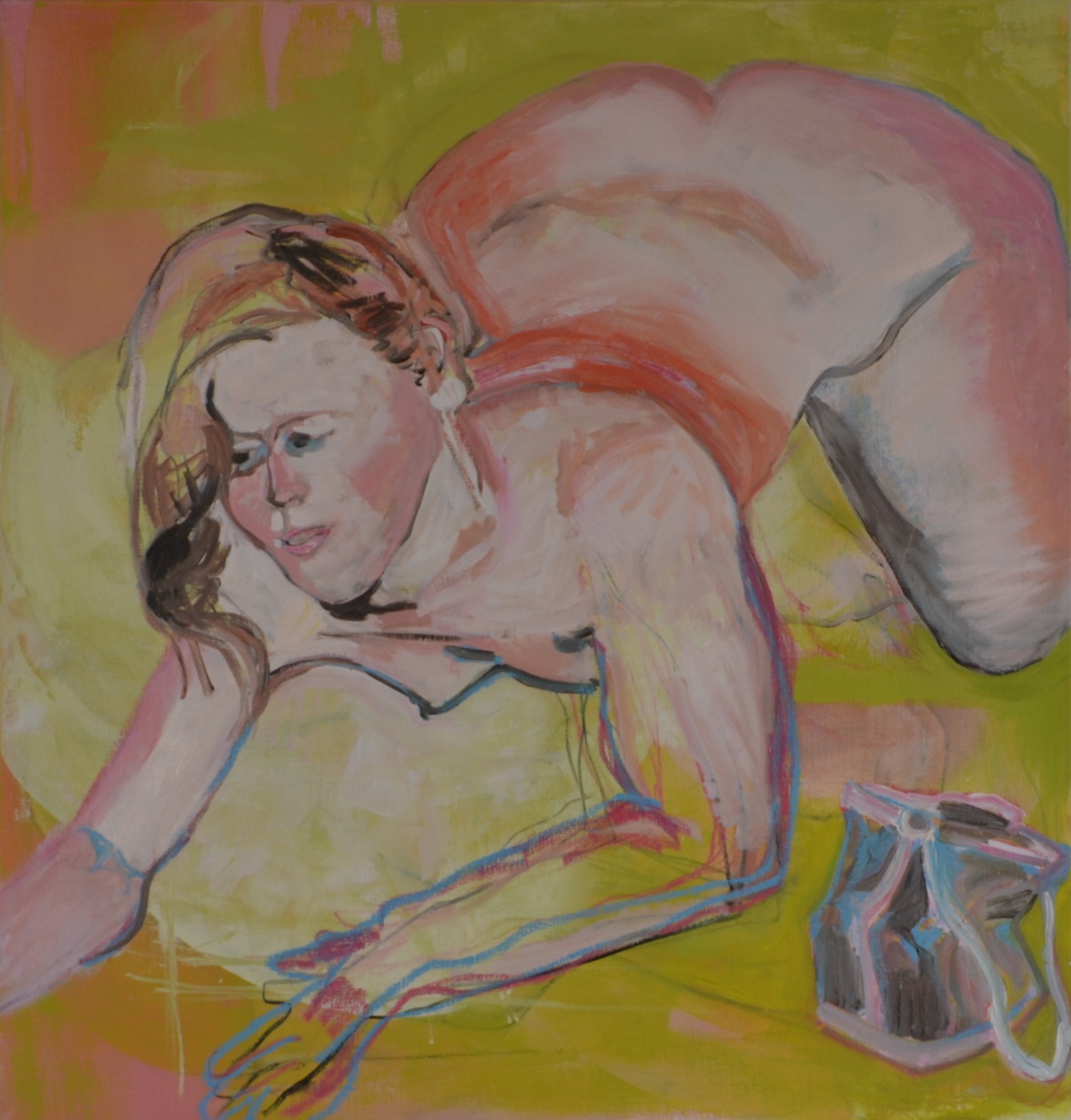 Artist Mary Murphy has an extensive exhibit of new work at Gallery 72 titled appropriately, Extravagant Fiction. Murphy’s show, which continues to May 22, is a mixture of large to medium-sized oil paintings, along with assemblages and an installation that rounds out this smashing solo show.

This exhibit is pure Murphy—large, meaty works full of thematic dichotomies of light/dark, good/evil and male/female themes.  She is asking us to slow down and enjoy the lushness of color combinations and sure design.

Most of the works are figurative, each a struggle of several layers of work which ultimately tell a coherent, fresh story. The work above, “Porcelain (Ally)”, shows a loosely painted and pink-toned nude, simply yet gorgeously rendered. The nearly opposite colors of pinks and greens with slight touches of dark value seem to greatly enhance the fleshiness of the figure—a Venus, indeed.

Because of the importance of color in her work, Murphy spends considerable amounts of time and consideration to the mixing of colors used in each project, as they will transmit a symbolic meaning as important as the figurative ones.

Her usual procedure of working is to draw with charcoal directly onto the canvas prior to adding oil paint. Sometimes the subject is color itself-which might later become a figure or flower.

“Once I make a mark, it goes rapidly,” Murphy said. “I attack the canvas with both hands, adding color quickly.  Then I step back and study the work for an hour or two—or a few days, attacking again when I see what to do next.

“It’s a workout with my whole body.  At times I work from a ladder. It’s about the dynamic process of expressing memories and a struggle for coherence and harmony.  My goal is to synthesize a personal imagery. There are times when the work doesn’t resolve itself for upwards of three years.”

Murphy works simultaneously on several paintings, moving from one to the next in her studio.  The work often goes through many stages and layers on the way to being finally finished.  With each time this artist comes back to an artwork, she is inevitably coming from a different place, which brings up new possibilities and changes to the works in progress.  But because of this layering and the new approaches that occur, there is always a freshness to the work that gives us the impression of their being done easily and simply.

Murphy is a thinking artist who has studied from great artists and writers from the past and who stays aware of world affairs and of trends in art as well as fashion and the current milieu.

The work looks visceral and quick, but in actuality, it’s cerebral:  read-write-think-work-look—repeat. Recurring themes of longing, hope, relationship, beauty and spirituality are never far from her mind as the paintings progress from state to state.

Painting is a solo activity for this artist, as for most who achieve success in this hugely demanding  arena. This solitude can also bring darkness, where Murphy says some of her best work often occurs.  She reacts with sensitivity to the touch of the canvas by the charcoal as part of the process, as well as to the combinations of colors which evolve with each passing state of the work.

Murphy asserts that despite the frequent prediction that the end of painting is upon us, it will never actually happen.  She believes we will always have the need for expressive color and design to beautify our surroundings, as well as to help us grapple with the vicissitudes of living in this world. And the artists themselves will continue to use visual means to express themselves in painting, their preferred language.

Besides the many paintings, there is also one collage work in this exhibit.   Murphy expressed her love of the childlike act of cutting and gluing beautiful paper fragments to make a new statement in a contemporary application.  She uses antique papers, old ledgers and calligraphy work from the past in an act of “re-purposing history” by using bits and pieces from another time and place in her current work.

Besides the 2-dimensional work, which dominates this show, Murphy has set up an Italian “environment,” featuring an antique chair with rug and chandelier and brass rose, as well as some found object assemblages.

The artist has shown regionally for many years, as well as showing and working in New York. Her current studio is at the Master Craft Galleries on North 13th Street.