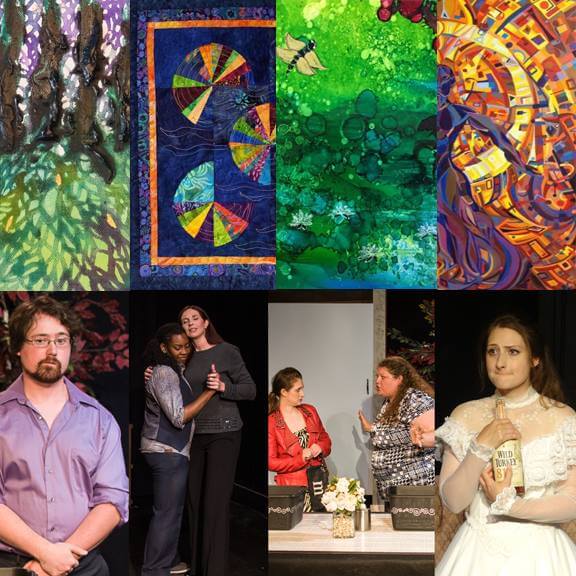 Spotlights on women have recently shown on our theatre stages. The Playhouse offered Calendar Girls in April and Love, Loss and What I Wore in December. Plus there was SNAP Productions’ June offering of Seven Homeless Mammoths Wander New England dwelling on a lesbian trio. But given the overall theatre season, you certainly can’t call that a groundswell. So when Shelterbelt Theatre comes up with Shattering the Glass: A Celebration of Omaha Women in Theatre, you can understand where it’s coming from. These are one-acts, consistent with its mission, by local writers.

“According to recent statistics, only 17-22% of plays produced nationally are written by women. That leaves the female voice deeply under-represented,” Shelterbelt Executive Director Roxanne Wach pointed out.

Consequently any move towards more equality makes solid sense. In this case, the three scripts do serve such a purpose even if they do not spend much time addressing the nature of femininity nor of sisterhood, although the idea of marriage appears throughout in one way or another. None of this has specific reference to Omaha; it could apply anywhere. Overall, despite a limited amount of fresh imagination and originality, there appears to be something to which women might better relate than do men.

Laura Leininger-Campbell and Marie Amthor Schuett have come up with the best-written script, ultimately sensitive and insightful L’ Chaim, also convincingly performed by actress Eli Ami as the bride-to-be having pre-alter jitters. You can’t call such a premise much of a novelty especially with its Jewish dialogue clichés. But then, the developments and how they are phrased take it to a beautifully pointed direction about cherishing life underscored, clearly, by the title.

Just prior to the vows, Rachel fears for the future, especially about husband-to-be Ben’s mortality. Locking herself in a room, she gets a visit from Bea, her feather-hatted grandmother, who talks about death as a kind of beauty. Jon Robertson’s version of Ben adds depth, with sweet and tender innocence. Plus costumer Mati Phelps’ wonderful stage-filling wedding gown takes on a life of its own, a perfect symbol. One of several good ones; they and the language ultimately make this worth the visit.

Preceding it is Daena Schweiger and Kaitlyn McClincy’s Ladies Room Confidential, an overlapping 12 character piece where a smart common thread connects anxieties over periods and pregnancies. A lot happens in that space and time, some of it trenchant, some amusing, some raucous, some peripheral. A few prejudices are held up to the mirror, including good dialogue about being obese, well-articulated by Nicole Hawkins as the one whose body causes the outburst.

Directors Sonia Keffer, Moira Mangiamelli and Jayma Shay all get the most possible from their casts, pacing everything well. The whole experience has much naturalness.

Thompson also sees this production as a step along the way to gender parity in theatre. Indeed, with such plays as these by such people as these, more experience and more exposure will be further cause to celebrate.