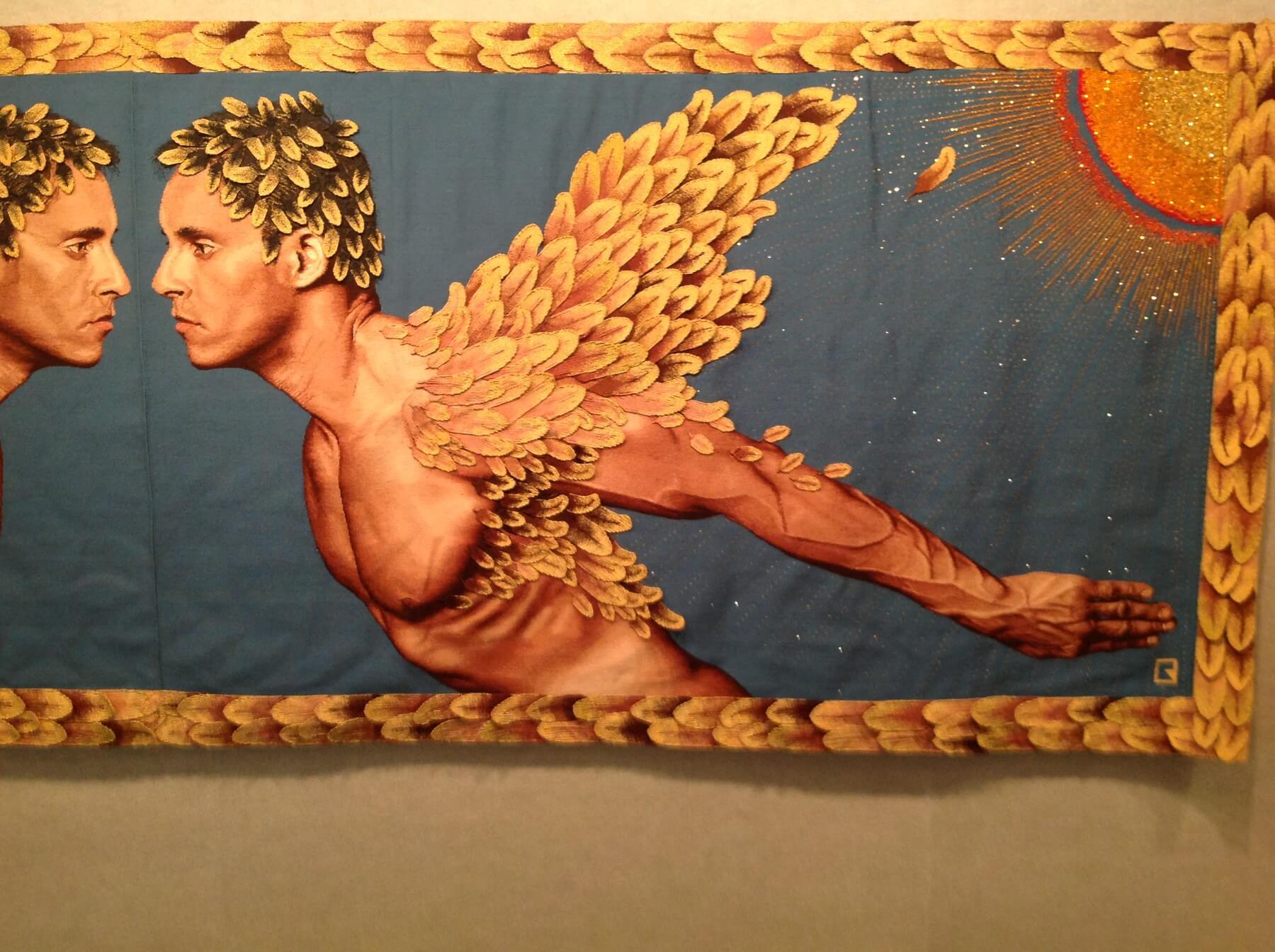 Arts venue Kaneko has pulled out all the stops in its Fiber Show that opened Feb. 6.  Made up of six separate exhibits in this huge, two-floor space, this multi exhibition demonstrates a full array of fiber possibilities being created in the world.  Following the highly informative architecture exhibit that recently closed, it looks from here that the Kaneko has found its niche as purveyor of cutting-edge design for Omaha.  And what a gift it is.

International artist Jun Kaneko has stated that this show is his thank-you to Omaha for its support of him and his wife Ree, co-founders of the venue. But it seems that it’s the Omaha citizens who are the recipients.  Considering the investment of time and the expenditure of this caliber of exhibit, a fitting response would be increased  memberships for Kaneko’s future programming.

Starting at the east door of the building one sees the giant Bow Truss space used in arguably the best approach heretofore, with two giant screens inviting us to enter between them to “Tropical Hawaii.”  That part of the show, along with the role of design in fiber art, will be covered next month; stay tuned.

Next are the anchors for this show, the “Fiber Legends,” in the center area.  Jon Eric Riis presents exquisite tapestries, done in the ancient, painstaking manner of centuries of artisans, with thousands of silk, gold and metallic threads woven to build contemporary images.  (“Icarus II” is shown above).  From Atlanta, Riis has 10 elegant tapestries in this show, all worth studying.  Watch for the announcement that Riis is coming back to Omaha to lecture.

In this same area are three incredibly rich full body “Sound Suits” by Nick Cave. All are from Nebraska-based collections. Cave is a young, African-American artist from Chicago, who has long collected thrift store findings and embroidered fabrics from all over the world.

He stitches his finds into costumes that may be worn by dancers or by mannequins, as seen in this show.  The book on Cave displayed at the entry is illustrated with a huge array of these costumes– which suggests that he must have an army of assistants to help him realize his fantastic visions.  Even considering that some of the stitching was gleaned from earlier times, it is apparent that this inventive artist has contributed a whole new world of amazing costumes.

The third artist that comprises the “Fiber Legend” triumvirate in this show is Hastings, Nebraska native Sheila Hicks.  After studying at Yale University and being awarded a Fulbright scholarship in South America, Hicks, 81, now lives in Paris and London.   She has textile work in several international collections.  The piece in this show, “Menhir II” is on loan from the Museum of Nebraska Art in Kearney.

This huge and iconical fiber presence quietly exerts its great power in a perfectly toned gray room, bathed in masterful lighting.  It makes one wish for a bench or two for viewers to spend time with this work’s presence, like the Rothko paintings at the Menil Chapel in Houston offer.

Omaha’s Susan Knight has two large and beautiful Mylar on Tyvek pieces in the main entrance hall that adds yet another category of fiber approaches to this show. “Collider”, 96” in diameter, and “Contours & Thicknesses”, a triptych showing ground water levels by color in the shape of Nebraska.

Having grown up near Lake Michigan and captivated by lakes and waterways, Knight has been investigating visual means to express her love—an ecological concern for a safe future for the world’s waterways.  Her interest in the subject of water, along with the ability to cut and manipulate the materials to suggest water themes artistically has garnered invitations to show work for international as well as national exhibits.

Moving toward the west end of the main hall, we see Mary Zicafoose’s contemporary weft-faced Ikat weaving, “Fields of Desire”, created by a centuries-old and intricate dying and weaving technique.  An internationally known weaver and teacher located in Omaha, Zicafoose is also the Curator of this expansive exhibit.

Zicafoose began working on the Fiber Show in earnest two years ago. “The American Tapestry Biennial” on the second floor is comprised of winners of a global call for entries of contemporary tapestry work. This international traveling show demonstrates the myriad of possibilities in design and cultural influences.

The east end of the second floor holds “Fabric of Survival,” the story of Esther Nisenthal Krinitz’s memories of her life as a young girl during the Holocaust. One might hesitate to enter this exhibit given the subject matter.  But the detail of the people and beautifully stitched countryside are done with such a sure hand, we move on with this narrative, comforted in the knowledge that the person creating this work lived.  Despite the times, somehow there seems be hope woven into the handwork.

Krinitz was not trained to be an artist, but as a seamstress.  Yet her craft is exemplary. Perhaps many will infer a spiritual journey with this work.  We all die, eventually, but it’s how we live, how we love and what we do with this life we’ve been given, that matters.