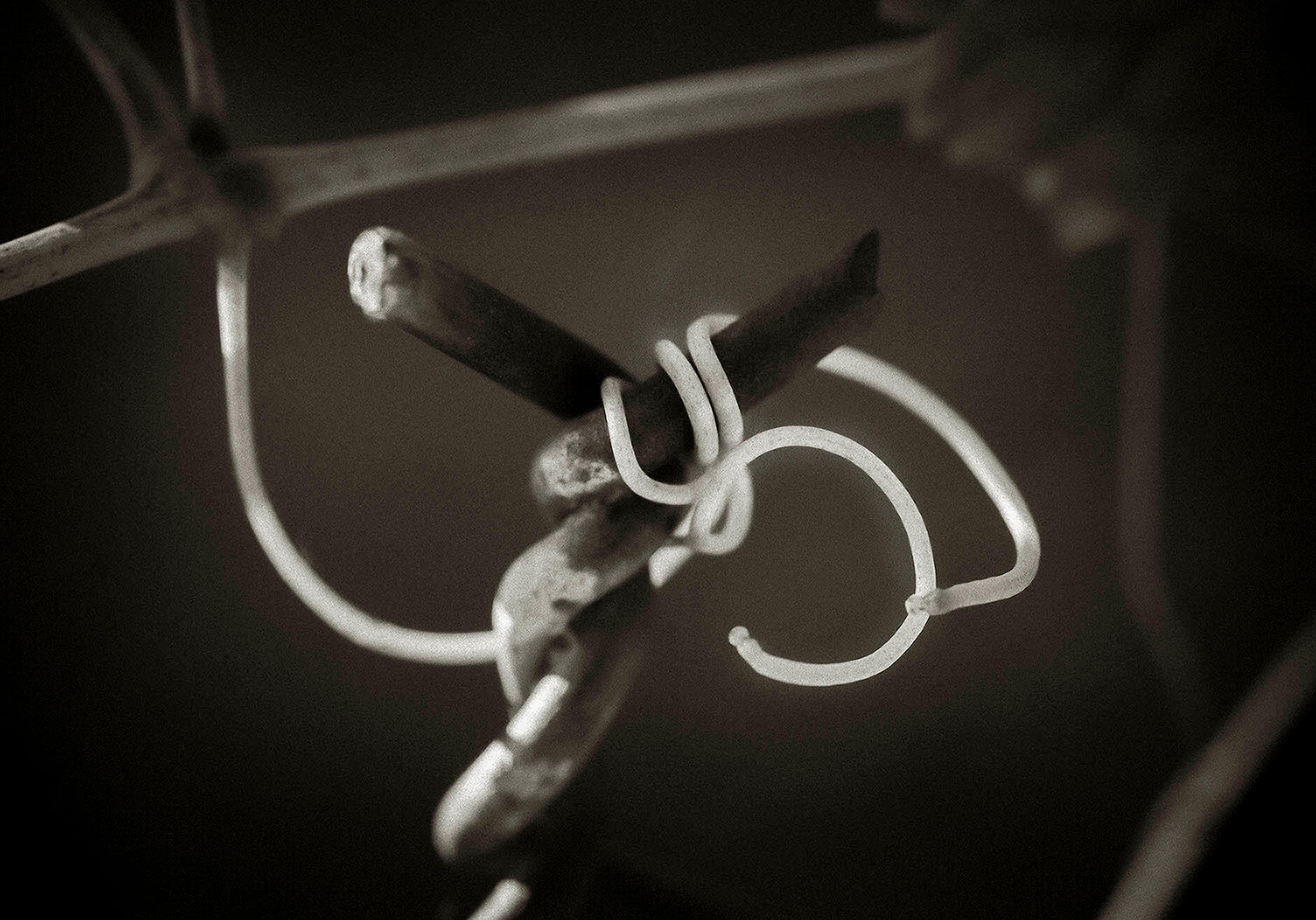 In his current show organized by the nomadic Moving Gallery of the Old Omaha Association the photographs of Kent C. Behrens: New Works strike me as exactly what one might expect to find at the end of the creaky hallway on the main level of the Old Market passageway.

After passing the flurry of saffron and magenta hanging in the windows of Souq, one arrives at the Garden of the Zodiac Sculpture Garden and Gallery to find a series of thirty-seven images, all the same modest size of 17 x 22 inches (hung both vertically and horizontally), and all exhibiting the delicate gradations from black to white that are made possible by carbon ink, fine rag paper, and the sensitive eye behind the camera.

Behrens’ primary subject matter for this series is drawn from the world of plants.  Far from the iconic treatment of flowers familiar to us in the work of Robert Mapplethorpe, Georgia O’Keefe and others, Behrens trains his eye on less showy botanical elements—a tendril of ivy twisting around a chain-link fence, dying leaves clinging to a thorny sprig of rose bush with the tenacity of a sleeping bat, a reedy plant in a state of disarray that appears compounded by its own shadow.

In the back room of the gallery, there is a trio of white flowers (one rose and two begonias) that each fill the space of the image with the beautiful folds of their petals.  These images suggest an easily captured perfection—in full bloom, as it were—which is the road Behrens could have taken.  Indeed, he has taken it in past work (which can be viewed in the archives of Gallery 72).

In this show, by contrast, the images emerge from Behrens’ interest in the quieter moments of emergence and decay that punctuate the lives of plants at both ends of their life cycle.

In the talk he gave at the show’s opening, Behrens quoted the line about “the force that through the green fuse drives the flower” from the famous poem by Dylan Thomas.  When read in the context of the entire poem, it is clear that Thomas is claiming an affinity with the fuses and the flowers.  In other words, he too is energized by this “force.”

Behrens is drawn to moments when this force is at its ebb, but his technique aims to show us that this force is never gone.  The vines glow with an inner light, the seed head of an elderberry appears to emerge from the mist, and the serrated edge of a leaf stands out against a background of flower petals with a gnarly clarity.

For the most part, these moments become visible to us a result of composition and lighting rather than digital processes.  Behrens uses a customary digital SLR camera, and the carbon inks he uses are designed for an everyday laser printer.

It is perhaps more important to know that Behrens trained as a landscape architect and spent sixteen years working for the city’s planning department working on everything from graphic design to gardens.  In addition, he and his wife have turned a portion of their backyard into a prairie.

He has an eye for formal relationships, although in this case the relationships spring from moments of quiet dynamism, as plants that are no longer growing still refuse, paraphrasing Thomas, to go gently into that good night.  Behrens’ knowledge of plants has no doubt driven his choice of subject matter, but he indicated in conversation that sometimes opportunities leap out at him as he passes a houseplant or spies an old bush through the window.

The installation of the show is simple.  There are no frames, just metal clips holding each sheet of rag paper at eye level.  The experience of the images deepens with extended wandering around the gallery, as new details of composition or varieties of texture emerge.  The muted grays and pixilated blacks may seem appropriate for the beginning of winter, but it is the sparks of life that stay with you after you’ve left the gallery and reentered the cold.