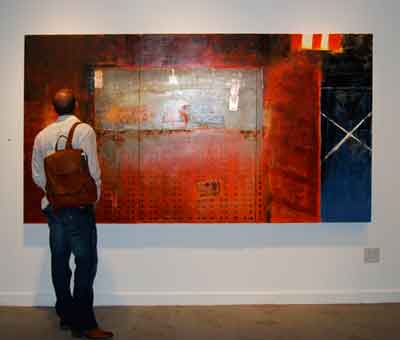 Anderson O’Brien Fine Art has been a “go to” destination for modern and contemporary art patrons in the Omaha area for the past 30 years. The gallery’s expansion to the Old Market at 1108 Jackson St. in July, 2010, generated much excitement. The current exhibition Sharon Booma: The Writing’s on the Wall clearly demonstrates why. The Writing’s on the Wall provides 25 new works by this prolific artist, who has been showing with Anderson O’Brien since 1996. The expanded space of Anderson O’Brien Old Market seems an appropriate venue for the urban beauty of this body of work, which is on view through May 22. Booma knew from an early age she wanted to be an artist and earned her BFA from the University of Connecticut. After working as a graphic artist and art director she turned her attention to painting full time and has been exhibiting since 1986. She lives and works in Massachusetts, and is represented at LewAllen Contemporary in Santa Fe, N.M., CaldwellSnyder Gallery in San Francisco, Campton Gallery in New York City, Anderson O’Brien Fine Art, Arden Gallery in Boston and the Etienne Gallery in the Netherlands. There is in this work the sense of physical material coming to full alignment with spiritual essence. An alchemist in full command of her capabilities, Booma imbues each piece with its own balance and harmony. The color, surface, and scale are intuitively resolved. The work hanging in the large front gallery plays as an orchestration of activity going to the center of stillness. “Composing and Revising,” a 60-by-60-inch oil and mixed media on panel, is actually two attached vertical panels, each 30 inches-wide by 60 inches-tall. The seam divides the square format, while also joining the two halves. The thinner rectangle of light gray to white on the right side of the composition appears as a shifting door, as metal studs applied to the surface barricade the space. Numbers and letters are applied or embedded in differing levels of translucency. The paint is optically and texturally active balancing the physicality of other collaged objects. “Entirely Credible,” measuring 60 by 108 inches, simultaneously appears as wall, door, window and niche. All four references assert figure and ground. The integrity of the picture plane is maintained while creating a meditation on “place.” The experience of the painting changes relative to the position of the viewer. The action of moving right to left, closer or further away enhances the contrasts of texture and color. As in the other works on view, Booma’s action with the material enlivens the surface. One can imagine her activity of brushing, scraping, and stamping, as she paints these surfaces, and then backing away to look, contemplate and see. “Creating balance and harmony in my work is intuitive,” Booma says in her gallery statement. “My painted surfaces reflect human experience; beauty in its imperfection, mystery and spirituality. While my instincts are to make rational and objective choices, my work remains open to the element of controlled chance — caught between physicality and delicacy, rooted in emotion, memory and imagination.” There are nine smaller pieces entitled “Writings,” each measuring 22-by-22-inches and framed. As in the larger panels, there are references to numbers, symbols or signs. Their scale provides an introspective variation in mood and rhythm. One might consider the text collaged in two of them in relation to the title of the exhibition. The title could refer to the story in The Book of Daniel where a disembodied hand mysteriously appears before the crowd at Belshazzar’s feast, writing on the palace wall that Belshazzar, the last king of Babylon, will be killed and his kingdom divided. That night the king is slain. “Writings #1” balances its pictorial elements to then offer up a collaged passage from Act IV, Scene ii of Hamlet , when Rosencrantz and Guildenstern appear. Rosencrantz asks Hamlet, “What have you done with the body?” Hamlet refuses to tell them where he has disposed of Polonius’s body saying, “The body is with the king, but the king is not with the body. The king is a thing.” The installation of the exhibition enhances the intimacy of the smaller “Writings,” while the larger panel pieces take a more pronounced place. There is a lot to see here. One might wonder how The Writing’s on the Wall encompasses a body of paintings, a body of thought, a body of senses all delivered for the body of one lucky enough to be looking. The Writing’s on the Wall continues through this Sunday, May 22 at Anderson O’Brien Fine Art in the Old Market, 1108 Jackson St. For details, go to aobfineart.com.