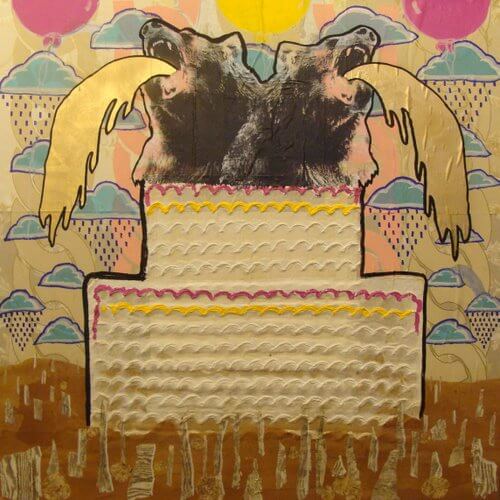 Don’t let its title, Golden Guts, deter you from seeing the new exhibit in the Bemis Underground featuring new mixed media on paper, canvas and panel from Kim Reid Kuhn and Josh Powell.

While Golden Guts doesn’t exactly roll off the tongue, despite its forced alliteration, its inspiration, concept and realization are mostly pleasing and palatable. Powell and Underground curator Joel Damon have a history of provocative collaborations and titles such as Destroy, Rebuild and Repeat, and Mountain of Sex, and this current exhibit is no exception.

This time around Kuhn has been added to this mix, and the result has transformed the normally eclectic venue into a unified, contemporary gallery space. Unified, that is, by more than its white walls, irregular angles and asymmetrical balance. Each work enjoys its own space and light and sightlines are established to keep the eye flowing even as traffic stopped during the busy opening.

Damon has hung the 17 large and small works in a way to take advantage of a similar palette and imagery in spite of differences in subject, style and point of view. And though this is a distinctly two-person show, its collaboration is noted early on in the large horizontal title piece in the Underground’s atrium created by both artists.

As the exhibit’s signature piece, “Golden Guts” was a 14-hour collaboration that Powell said was “like sharing one mind. Although I’m more controlled chaotic and planned out, Kim is intuitively chaotic. We just worked right around each other, feeding off each other’s next move like clockwork.”

The result is a controlled chaos of their individual iconography: Powell’s as politically, environmentally charged and military-industrial strengthened as ever what with machines, tanks and artillery as well as ravaged nature and Kuhn’s more abstract, organic and amorphous shapes and figures. Out of this chaos emerges a palette and pattern of pure, neon hues that not only hint at unifying themes but each artist’s individual expression within the show.

Damon says he drew upon the King Midas myth for the show’s title but cautions that though its interpretation here can be ambiguous and elusive, that’s not necessarily a bad thing.

“There are two versions of this tale in the show,” he said, “but I like that the artists share a mutual visual interest. One (Powell) is more direct and decisive, but the other (Kuhn) is more generous toward viewers allowing them to make it whatever they need it to be.”

The two-faced nature of gold has been dealt with artistically from Greek mythology to the “Lord of the Rings” trilogy and in film from “The Treasure of the Sierra Madre” to “Wall Street.” The gut-check in Powell’s work here appears to be greed and the Midas Touch. Though one could paraphrase the theme of Kuhn’s art as “all that glitters isn’t ‘told,’” you get the idea in her gold-infused cacophony of images.

Her titles give away little except the more explicit “Illicit,” but Powell’s protracted extensions beyond the parenthesis, such as “(Tourist Girl) Look Ma, They Gave Me A Souvenir! Can I Keep IT, Can I Keep IT?” almost give away the farm. Only their sarcastic tone keeps them from waxing prosaic. That said, Kuhn’s reverse psychology generally present in her titles and offers of free association would be better served, as would her viewers, by an artist statement, particularly with art so abstract and introspective.

Golden Guts then is a jarring juxtaposition of two dissimilar elements, one inorganic and inert (gold), the other organic and reactive (guts). The former is decorative, fantastic and symbolic, the latter is down-to-earth, a reality check like a basic kick to the stomach and bowels. Thematically and stylistically, what do the two artists bring to the show that is visually interesting and provocative?

Aesthetically, Powell is the more aggressive, conceptual and figurative in his assault on the pursuit of gold in all forms to the detriment of humankind and the environment. His iconography, as mentioned, is a blend of industrial strength and the natural world, particularly with wild animals in a key role as in “(Gorilla Moon God),” “(Wolf Flower God)” and “(Yao Guai Bear Morph God)”.

In all three, as well as others, the animal kingdom is in revolt on a barren, polluted landscape. Predator and prey alike are imbedded with or spewing forth gold, or it flows like lava from volcanoes or machines destroying nature in its wake. Gorillas, wolves and bears resemble the radioactive creatures of ‘50s sci-fi films who wreaked havoc on a society that fooled with Mother Nature. A fool’s gold, indeed.

Powell’s most effective work is the striking yet subtler “(Healing Horsedog God Triptych),” cleverly created on found boxes. All his visual motifs are present here including storm clouds on the horizon and a treeless, desert-like panorama, but it’s the carefully detailed “Horsedog” that holds our attention. Emaciated and defeated, a victim finally of the gold within his exposed ribcage, the artist has outlined the animal in a jagged, blazing red, like a cartoonish, nightmare X-ray. Dionysus petrified the daughter of greedy King Midas. Mother Nature will also have her revenge.

No such social conscience present in Kuhn’s work, but the gold motif is just as evident in a style that is often as dense in structure and patterns as Powell’s but in a manner more free-flowing, gestural and suggestively anatomical. Unlike in Powell’s more overt imagery, the precious metal in Kuhn’s resembles a vein of gold flowing alongside a river of fleshy pink ectoplasm.

And often on a black background which suggests that this prospector is mining a fool’s gold subconsciously with mixed results. While her smaller, more delicate pieces such as the “Study for ‘S’ Series” are introspective, it was her larger works that drew more attention opening night. Most compelling are “W.H.W.T.B.M.” and “Illicit,” primarily for their pleasing composition and emotional tension which help the viewer to focus on her visual clues and themes.

Ironically, given the drama and density of the above, Kuhn’s most successful work in this show is the beautifully rendered, minimalist “Untitled.” It’s a suitable title for the evasive artist as it portends to be a skeletal head and hand peering from the edge of its descent or hiding place. The figure is jaundiced in a light shade of gold with one clear eye, the other bloodshot, wary and unsure of its next move.

Perhaps “Untitled” is Kuhn’s self-portrait just as Powell’s wild kingdom is his alter ego. For her, the allure of all that glitters can lead to subterranean delights and pitfalls. For him, it’s a fool’s paradise. Like its title, Golden Guts is a mixed blessing, but worth exploring underground.

Golden Guts continues through Dec. 31 at the Bemis Underground, 724 S. 12 St. For details and schedule go to bemiscenter.org.