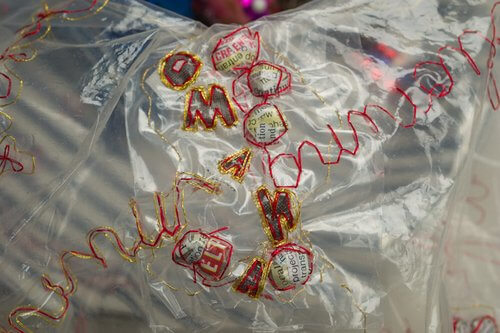 Flo Oy Wong recently brought a variety of mixed media work from California to Council Bluffs and The RNG Gallery. Wong’s March/April exhibition From There to Here presented selections of past work, along with her new series the “Omaha Pie Project” completed in 2011.

“I am making work from the totality of my being,” Wong said. “The journey and story of the people I feature is the place where people can connect. I love finding people’s hearts and touching them.

“Since I bring a particular aesthetic with a social-political outlook involving story telling I wasn’t sure how my art would be received, I am overwhelmed and delighted by the reception. This exhibition at RNG is based on the diversity of those I chose to include in the “Omaha Pie Project.”

The four multi-media pies are each constructed with pie tins, cloth, rice sacks, wire, thread, and poetry. Wong approaches each subject as an opportunity to research and educate herself, to see the world through their eyes.

The Bill Matthew’s Pie includes references to Bill’s passion for architecture, opera, and his delicious brownie recipe. The construction evokes a sense of structure reminiscent of the calm steadiness Bill Matthew embodied. Frank Lloyd’s quote, “The heart is the chief feature of a functioning mind” used at Matthew’s memorial mass in 2009 is felt in Wong’s tribute.

The Rene Orduna/Rob Gilmer pie has a wire frame reference to a Mayan Temple honoring Orduna’s Mexican heritage. The four sides symbolize two plus two becoming one. The delightful recognition of “ones” repeating in 11-11-11, their wedding date, reflects the wit and enthusiasm this duo brings to all their endeavors. The measuring spoons and photographs celebrate cooking and photography, which play prominent roles in each of their lives.

“The pie is a quintessential American icon,” Wong said. “Pies speak to the restaurant culture I grew up in. They also speak to Dixie Quicks, the restaurant associated with the RNG gallery, and Big Mama’s.”

The color and design in Patricia Barron’s pie pays homage to Big Mama’s Kitchen & Catering. Specializing in soul food and traditional American fare, Barron began Big Mama’s in Omaha over 30 years ago. The menu items and memorabilia are highlighted by the inclusion of Barron’s late daughter’s first grade art project.

Ayman El-Mohandes, UNMC’s Dean of the College of Public Health, is honored with a pie referencing the Missouri, Nile, Potomac, and Rhone Rivers. “Our conversation was like a river,” Wong said. “Hearing his philosophy of life and what it means to be a Sufi, I knew I had to use these four rivers as a metaphor for his life’s journey. I included the rose when I found out it’s his favorite flower.

“When I made the works of the honored subjects I felt we were giving pieces of our hearts to each other. The community has opened to me. I feel I’m an honorary Omahan. It is a meeting of the heart and the mind. This merging of energy even carries over to my assistant in California, Theresa Because. We have worked together for 6 years. As we work on a project, her talents and ideas come forth in a give and take between the two of us. My father taught me life is a two-way street, you have to give and take. ”

The earlier work included in From There to Here provides a framework for understanding Flo Wong’s passion for people and their stories. The exhibition has the nuance of a mini-retrospective. The “Oakland Chinatown Series” utilizes graphite drawings depicting the artist’s family while working in their restaurant.  The “Baby Jack Rice Story” about her husband’s childhood growing up in segregated Augusta, Georgia is compelling to look at. The combination of photographs, text, embroidery, and sequins applied to the stretched rice sacks becomes a “quilt” of the story’s content. The color and construction enhances the narrative to create a complete visual statement.

The “Family Rice Sacks” made for Wong’s siblings are visually rich with sequins and embroidery. Hanging from individual bamboo rods they appear as individual personalities. “Kindred Spirit” tells the story of the Los Alamos scientist Wen Ho Lee, arrested in 1999 by the U.S. Government for mishandling sensitive nuclear secrets. The color and texture of the Thai silk contrasts and complements the rice sack’s beads and text.

“The journey of the people I feature is an element of my spiritual practice,” Wong said. “My parents were immigrants. They courageously came to a country that didn’t want them. They tenaciously clung to life. My siblings and I witnessed our parents living and being ‘who’ they were, doing what they did. My father had high expectations and valued mobility through education. My mother believed in the cultural practice of subservient women, though she became progressive later in life. It is these core values my parents taught us that now inform who I am and the work I make.”