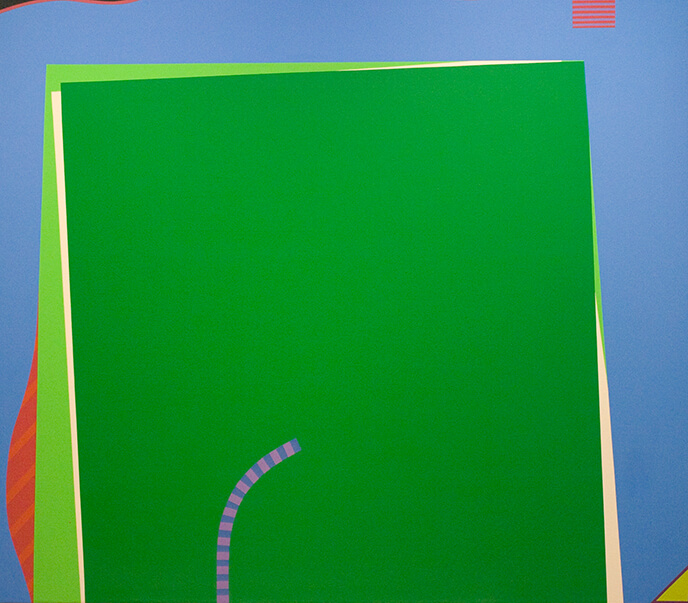 As social activism, and social practice take hold in pushing the definition of “what is art?”, it is good to know a purely visual aesthetic is still relevant. The evidence of such is on view in Modern Arts Midtown’s current exhibition Abstract Works at MAM: A survey of Peter Hill’s hard-edged geometric painting including new work from Sculptor Les Bruning, continuing through Nov. 29.

Abstraction is the prevailing common denominator unifying the work of these two seasoned artists. Their individual application of geometric form is where the exciting differences occur. Peter Hill, former Professor of Art at UNO from 1958 – 2000, utilizes color and shape in his acrylic paintings on canvas, creating differing variations of color interaction. Les Bruning, former Professor and Chairman of the Art Department at Bellevue University from 1973 – 2011, uses constructed aluminum strips and color accents to create dynamic tension in space.

Hill began his career as an abstract expressionist, turning to hard edge geometric abstraction early in his career. A conversation with his UNO colleague, sculptor Buzz Buchanan, provided the impetus for his change in direction. “Buchanan’s large metal sculpture ‘Black Twist’ and his thinking process in making it influenced me,” Hill said. “I decided to develop paintings that looked more pre-determined.”

“Escort” 1983-86 contains varying proportions of geometric shapes. The different intensities of color create a spatial atmosphere in which the shapes balance themselves, not unlike the experience of listening to good jazz. “Make a color field and work from there,” the artist said. Hill’s ongoing exploration of shape and color has become the signature style of his prodigious output.

Bruning goes so far as to describe his new series as 3-D “drawings in space.” His aluminum constructions use repetition with variations of color, shape, and position.

“I begin with drawing, and then build a wooden maquette,” he said. “The final forms are strips, water jet cut from one inch thick aluminum plate. The sculptures are minimalist linear drawings in space built through a constructivist process.”

Bruning’s “DuoCross B” stands on a circular footing. As I walked around it, its vertical diamond shape appeared to rotate. “DuoBeam A” could reference a bridge, unified opposition, or just itself. Material integrity and playfulness combine to create forms, which hold the eye.

Hill’s playfulness fills his canvases with shapes leaning and tilting. Their pattern, color, and scale animate each canvas in a different way. Individual shapes in every painting have their own characteristics. The blue triangle in “Free Play” feels lightweight, while the long serpentine curve in “White Line” is elegant. The little triangle in “Easy Does It” seems happy, while all the shapes in “Right On” are. The kick in Hill’s work is akin to a sleight of hand, an illusion of balance held by the edges of the picture plane, with color interaction pushing and pulling the space.

“Erebos” is a handsome early example. The vibrating field of diagonal stripes on the left balances the curvilinear flow of green and violet on the right. Attached at the top is a subtle diagonal strip of violet acting as pendulum to its partnering short curve of yellow. The orchestration of these shapes and colors can almost be heard. Using this one painting as a standard against which to compare his recent work is fun, giving a deeper appreciation for Hill’s accomplishment over the arc of his career. It is a humbling and rewarding experience, with the best part being he’s still not done.

Bruning cites Naum Gabo, Isamu Noguci, and David Smith as important historical influences. “I’m interested in creating shapes without mass,” he said. The aluminum constructions on view here do exactly that. The proportion and balance of each one is particularly satisfying in how they delineate space. Furthermore, the entire series is a variation on the theme of problem solving.

Bruning’s exceptional experience with metal casting and welding might be what gives his work its integrated quality. “Ribera” and “Swept”, two cast bronzes in the west room of the gallery achieve a dynamic interplay similar to the aluminum constructions, even though they use different processes and material.

Hill’s paintings and Bruning’s recent constructions pair up to create a satisfying riff on the pleasures of hard-edged abstraction. The language of form taken to its essence is its own brand of activism, eloquently responding to the human condition.