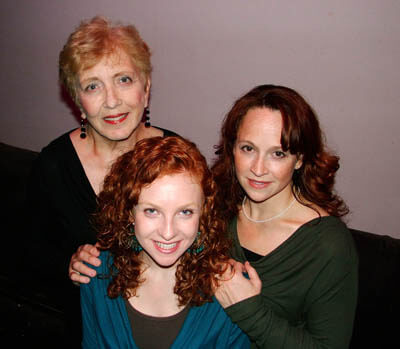 You don’t have to be a mother or a daughter to fully enjoy a terrific little play called Girl’s Room. Whatever your age or gender, you can identify with the impact of each new revelation as three generations of women share secrets at the Bellevue Little Theatre.

In a bedroom pink with ballet memories and shining with dance trophies, “Girl”—that’s the name on Kate Silver’s birth certificate due to her indecisive mother—can barely breathe when mom and grandma smother her with questions about the accident that kept her from opening as the leading ballerina in a New York company.

But let them share some champagne and soon all three are buried in baggage. Before long, you’re ready to sing the praises of playwright Joni Fritz and director Julia Hinson for an evening of dramedy that rolls so smoothly along that it’s over too soon.

Hinson’s cast of three who actually are three generations of the same real-life family click so superbly, never missing a beat, that any unrelated playgoer can share poppa Bernie Clark’s pride as he watches his wife Kay as Flo, the grandmother; his daughter Vanessa Larson as the mother Marilyn, and his grand-daughter Shelby Larson as the injured ballerina.

I can’t recall a finer performance from the veteran Kay Clark, the most flamboyant of the three in vivid costumes by Carole Zacek. Her real-life stepdaughter, Vanessa, faces the greatest challenge from a script that presents her as a rather unhappy woman who abruptly brightens her outlook now and then.

From the outset, our sympathies go to Kate, age 23, trapped in her childhood bedroom kept by her mother like a shrine to her dancing. We soon learn that Kate feels she’s living her mother’s ballet dream, but discover much later that both of the older women have dance stories of their own.

The fun really begins when Kate takes a pain-killer, Flo pops a champagne cork and the three gather around a card table to play a version of blackjack that lets the winner select a loser to reveal a secret.

First it gets funny, then uncomfortable and eventually a bit ugly with damning disclosures. When daughter convinces mom that she hates that dance-dominated bedroom, mom gets rid of the ballet stuff and pounds nails to hang horse paintings.

And when angry mom won’t hear what grandma has to say about avoiding her own dance ambitions, Kate demands, “Put that hammer down and listen to your mother.”

In other words, there’s no shortage of drama, comedy and superb acting.

Creighton University ran Will Shakespeare’s Merry Wives of Windsor: a Wild West Romp only last weekend but director Alan Klem and his cast deserve a few quick credits for an entertaining evening with that old favorite, Sir John Falstaff.

The overweight reprobate has transformed from soldier to outlaw and when Mistress Page and Mistress Ford have him dumped into the river, it’s the Platte, not the Thames. But Justin Edmonds gives him plenty of belly-proud heft and costume designer Lindsay Pape supplies him with wonderfully unsavory-looking compadres.

Among the supporting actors, Matt DeNoncour as the French doctor with flair, and Patrick Kilcoyne as Frank Ford, made the most of Klem’s farcical adaptation. Eddie McGonigal’s swishy bartender was even over-the-top for this broad style, but he managed some impressive pratfalls.

One wishes once again for better acoustics in Creighton’s theater. You can hear the more straightforward diction clearly enough, but whatever accent Josh Allen was delivering as the parson (Welsh in the original, Swedish this time?) got lost in the rafters.

And let it be noted that Bellevue wasn’t the only theater featuring family ties. Klem’s wife Kelly coordinated music, which included some spaghetti western sounds, and their little daughter Katie made sure she could be heard when the romp ended in song.

If you missed this brief run, you might capture its boisterous spirit by singing, “Happy Trails,” with Katie’s loud enthusiasm.