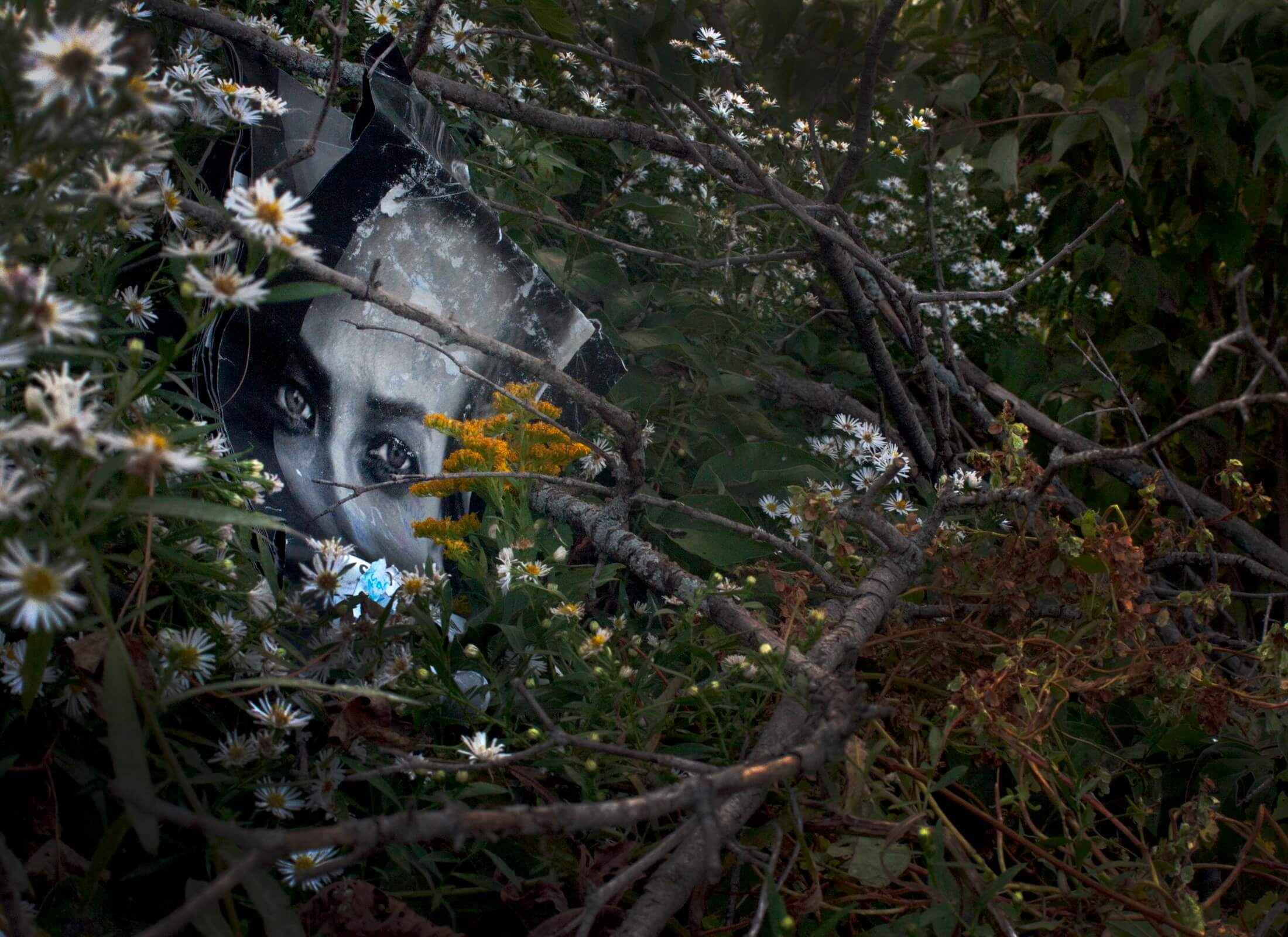 Somewhere in the fall twilight of Hummel Park, a fervent observer scans for light and subject to portray the mysteries of this setting’s essence. Monte Kruse, with the sensibilities of both a photojournalist and an environmental artist, goes public with his observations in his new photo series “Hummel Park” at the Connect Gallery, which continues until Nov. 28.

Kruse’s fascination with this park will translate into words as well as works in an Artist Talk and reception, Nov. 20 from 5:30-9 p.m. that will resonate with many Omahans about the haunting history and secrets of this hilly and densely forested park.

Like a detective, he flushes out this natural space’s interactions with its human visitors. Rich with texture and natural light, these large photo narratives are printed on canvas which adds a haziness that Kruse feels heightens the mysterious effect.

In “Apparition,” a photo shot in near-dark without the aid of a tripod, the canvas’s linen texture becomes more pronounced in the image. The flashlit cobweb gauze clinging to listing tree trunks gives a point of focus, while elsewhere in the photo, fading patches of light cast through the tree canopy create an impressionistic blur.

Overall, this large photo appears very dark, and it takes sustained observation to appreciate its nuances.  Kruse believes that his change from prints-on-paper to prints- on-canvas has created a more durable and portable artwork as well as one with enhanced effects. One wonders if this image would have been more effective on a smaller scale.

Another late night shot, entitled “Edward Munch’s Night,” may be more ghostly than “Apparition.” Here, a misty moon lights up a tangle of bare limbs and barkless white tree trunks. Below, moonlit reflections on water create the aesthetic balance of the piece.

Often Kruse composes his image as a still life. He alters the natural environment by adding found objects from the area. In “Country Accent, J Cash,” one gets a “morning-after” feel from a Ponca Creek scene.

Taken early on a Monday morning, this photograph captures a grassy waterway where lichened branches catch the weekend’s detritus.  Discarded Pabst Blue Ribbon beer cans and a poster of Johnny Cash are caught in this woody dam, suggesting the misery this park has witnessed.

In another, “1998,” a poster of a woman’s forehead and penetrating eyes peek through branches of goldenrod and daisy fleabane. One wonders, is she looking for a peaceful resting place or hoping for discovery?

“My Mother Watches Over Me” is the dramatic highlight of the show. A disembodied woman’s under-slip hangs as if floating across dark branches and dead weeds. Stained and torn, the 1940’s vintage garment cradles both a lush pink rose and dead autumn leaves in its empty cleavage. Kruse’s title comes from a homeless man he found camping in the park. Questioned about the wisdom of sleeping there, the old man attributed his fearlessness to the sense that his mother always watched over him.

“Ode to Neruda” gives a nod to the Spanish poet, Pablo Neruda, author of 100 Love Sonnets and more. The photo focuses on four shards of glass arranged on a leafy forest floor in a way that invites the eye to hop scotch across their reflective surfaces. The shards’ perfect reflections of overhead tree canopy and floral color hint at a kaleidoscopic eye.

Kruse brings to his work a background in photojournalism documenting AIDS patients in Chicago, events in Gaza, and the daily lives of a married couple with cerebral palsy and a young lady with mental disabilities. In Nebraska, he exhibited black and white portraits of nude agrarian workers both at MONA in 2005 and Garden of the Zodiac in 2013.

He aligns himself with authors and artists who follow a Southern Gothic aesthetic, seeking out the stories of outsiders, the supernatural, and unconventional landscapes. He suggested that this show might bring “some of the southern gothic to the north.”

Kruse counts Southerners Sally Mann and Keith Carter, known for their black and white photography, as important influences. He shares their love of photography of the near and personal which translates into universal truths.

A graduate of Creighton University, he also credits Don Doll, a recognized photojournalist who has documented various Native American tribes and global cultures, as an early influence.

Like many experienced photographers, Kruse made the shift from film to digital photography and credits digital with his ability to capture images in minimal light. While he has no one to credit for “dark room” printing, he greatly appreciates the collaborative partnerships he maintains with Terry Koopman at Photographics Imaging and Carol McCabe at Creighton University.

Hummel Park will continue until Nov. 28 at Connect Gallery with an artist talk and reception, Nov. 20. For details, go to connectgallery.net.