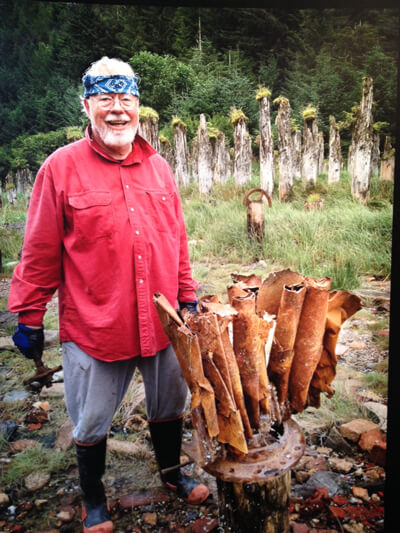 Omaha sculptor Ron Parks came to art in a rather circuitous manner.  Growing up on a farm in Pierce County, Nebraska in the 1940s, he would have been like most rural kids–handy with tools and able to problem-solve with recalcitrant machinery.  After high school, he joined the Navy, and spent those years after training as a mechanic working on airplanes, adding to his ability to tinker and fix machines, and thinking visually.

When he returned to Omaha, Parks first worked at Continental Can, followed by Drake Williams Steel.  He next began working at a small plant which constructed metal equipment for the food industry in Millard.  This occupation required that he be able to draw his ideas, and to explain what he wanted the workmen to construct.

These years of visual thinking through drawing in dimension improved his understanding of metal construction to the point that he bought Millard Manufacturing Corporation in 1971, a stainless steel fabricating business.

This is what we have in Parks’ work and his art.  He knows metal in all its possibilities, and is accustomed to the finest degree of finish. If you go to his new self-titled exhibit at Nebraska Arts Council in the Burlington Building, 10th and Farnam (there until September 20, 2013), look closely at the detail in each of his sculptures…every small part of each piece is expertly finished—not surprising, as we have a fine machinist doing these designs.  And the materials that Millard Manufacturing can turn into sculptures are so fine-tuned and right somehow, one cannot conceive of a different approach that could be as elegant.

Be sure to study the maquette called “Mirage Family.”  A rendition of this piece is currently traveling in Russia as part of a 4-year, international traveling exhibit, “In Family Unity—Unity of the World,” sponsored by the Yekaterinburg Art Foundation

The company employs CAD engineers, drafters, welders, and various support positions needed to coordinate the business.  Most of the work is in the area of building food processing equipment. They ship throughout the United States, as well as internationally, and deliver state-of-the-art equipment.

During many of the years of directing this organization, Parks also expressed himself visually in the field of photography.  And he began to invest in art work, particularly from Midwest artists.

At 60, after suffering a heart attack, Parks stepped back to recover, and began to design dimensional pieces, starting with sketches and simple models.

One might compare Park’s playful planning style to Alexander Calder, whose “Circus” was caught on film for the world to enjoy years ago.  Starting with a “what-if”, and some springs and a foam ball or two, Parks ended up with one of his “Boiiing” sculptures to entrance us…made large with exquisite metal materials and great craftsmanship to boot!

His sense of joy and fun are apparent in so many of the works we’ve seen in Omaha, such as at the Joslyn Discovery Garden, the north bank of Leahy Mall downtown, several years at the Norfolk Art Center, and exhibits he’s had at Lauritzen Gardens and Leahy Mall’s Summer Arts Festivals.

Another artist that comes to mind in comparison to Parks is Albert Paley, who created the four giant sculptures on Interstate #80, into Iowa.  Those of us lucky enough to hear Paley’s speech at Joslyn Art Museum know of the careful engineering and precision of cuts and attachments on those pieces which will maintain stability long into the future.  This type of sculpture must go through rigorous planning and execution to assure durability and long life, as well as to meet the high design standards of the artists.

A third sculptor known for precisely-made steel pieces is Fletcher Benton, whose beautifully designed one-color “letter” sculptures can be found in Omaha.  Perhaps all of the sculptors discussed here mirror today’s societal expectation for precision in design, much like the ubiquitous slick commercial design we’ve become accustomed to via computers.

Because of the nature of the metal manufacturing business, Parks can and will replicate each sculpture to clients with the same degree of refinement in various sizes. Businesses and patrons from all over the world may own a sculpture made of fabricated industrial materials, able to stand the test of time. The Omaha community is lucky to have someone with the ability, talent, and oeuvre of Ron Parks.