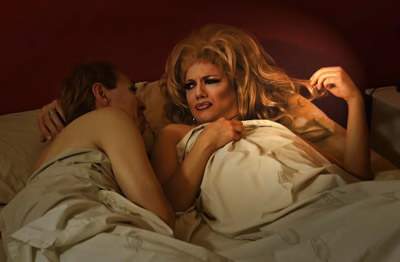 The SNAP! parody of Valley of the Dolls made me want to laugh all the way to a video store and rent the 1967 movie. Performances by Michal Simpson and Adam Nathan were so outrageously entertaining you knew the original must have set new lows for overwrought soapiness. Credit a crazy gender-switching cast and at least two off-stage geniuses, director M. Michele Phillips and video designer Mark Cramer, for a show that’s funnier than the former holiday hit at the SNAP!/Shelterbelt theater, Christmas with the Crawfords . Phillips manages to maintain a style that elevates parody to its own burlesque caricature of frenetic pill-popping. Cramer took his video work, which added fun to such shows as The Secret of the Old Queen , and raised it to another level from start to a finish full of out-take credits. Simpson may go on to play some serious roles, but he’ll be lucky to top his inspired silliness as Neely O’Hara (Patty Duke in the movie) in her rise to stardom and fall from “dolls,” the uppers and downers she kept quaffing by the mouthful. Whether awkwardly curling up stoned on a love seat or his rock-bottom pleading, “Where is everybody?” after driving everyone away, he’s hilarious. And his work weds best with Cramer’s video creativity when we see Neely singing in garish makeup on a cystic fibrosis telethon hosted by Joey Bishop. Contrasting with Simpson’s delicious scenery-chewing is the moon-faced Nathan’s demure Anne Wells. He’s either an appropriately bad actor or a master of understatement, maintaining a flat serenity even when a dildo falls from her purse. He also combines with Cramer when Anne is cast in an ad campaign as “The Gillian Girl,” who Cramer shoots in both coy close-ups and perched atop a rocky peak. But it’s far from a two-man (as women) show. Female-impersonating pro Steven Knox in the Sharon Tate role, presents Jennifer North as the classic femme fatale drag queen, and Ron Osborn doesn’t fall far from his many turns as Joan Crawford when he dons his own Susan Hayward creations as Helen Lawson, a tough broad who sings in deep whiskey-and-cigarette tones. Two favorites among the women playing men were the always-appealing Chelsea Long as lounge-singer Tony, Jennifer’s love, and Thomas Lowe who shined in several roles, but especially as Tony’s sister. Long’s Tony breaks up the audience in another of Cramer’s video highlights when he snaps out of his sanatorium stupor to sing a lively and off-key, “Come Live with Me,” duet with Neely before dropping back to drooling. Osborn fashioned his own costumes, but Nancy Ross made many other outfits that added to the fun, and Echelle Childers worked on some memorable wigs, including Helen’s topper that Neely dunks in the toilet. Childers also played the fickle agent, Lyon Burke, who first breaks Anne’s heart, then offers to marry her only to hear her softly admit, “I don’t feel a thing.” Rhonda Hall’s name shows up as props honcho on almost every theater around, and here she gets credit from director Phillips for collecting a motley array of items, including plenty of those brown plastic pill bottles. Whether she or Childers or Knox himself came up with Jennifer’s big blonde wig, it certainly matches the perfectly piled-on excess of everything else in the show. The small opening-night audience may mean most playgoers have either forgotten or never heard of the Jacqueline Susann book or movie. You don’t need the slightest awareness of it to enjoy what this cast is sending up through the roof. Speaking of the author, Phillips notes that she walked out on the movie, and adds, proudly, “If Ms. Susann were watching” this parody, “she’d stomp out of the theatre again in a heartbeat.” Most of us, on the other hand, will stay until the final spoofing credit. Valley of the Dolls runs Nov. 11-Dec. 12, Thurs.-Sat. 8 p.m. (except Thanksgiving Day), Sun. 6 p.m. (except Dec. 12, at 2 p.m.) by SNAP! Productions at SNAP!/Shelterbelt Theatre, 3225 California St. Tickets are $20. Call 341.2757 or visit snapproductions.com