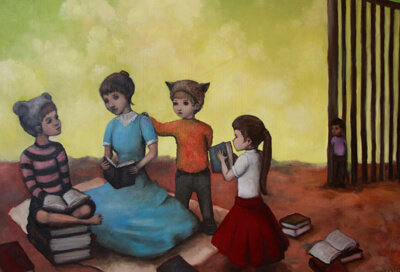 In 2007 mixed media artist Nolan Tredway had an anti-Cartesian moment in the Bemis Underground that resulted in a terrific collaborative exhibit featuring many current and former Lincolnites.

“Anti” because in response to Descartes’ familiar “cogito ergo sum” (“I think, therefore I am”) Tredway countered with “I live, therefore I think,” as espoused by Spanish philosopher Ortega y Gasset, an admitted influence on his work.

Among other things, Ortega believed one must forge “a project of life” unencumbered by convention or given structures. Whatever the project, art included, life must be experienced before “figured out.” And, in the end, may ultimately remain an enigma.

Four years later, Tredway, one of the region’s most gifted and original voices in the visual arts, still has a lot on his mind as evidenced in his current exhibit, Lost Ends, at the New BLK Gallery. The show features paintings, sculpture, mixed media and video from this prolific artist who is driven partially because “I have too many ideas that will haunt me.”

So much so that Tredway has participated in over a half-dozen shows in the past few years with two more next month,. and a collaboration with Amy Morin and Rob Quinn in December at the new RNG in Council Bluffs.

Tredway has promised himself to take 2012 off and create work marking a new direction. As with this current show, his new and traditional media will likely remain deceptively whimsical in nature, but he feels it’s time for a change in his point of view, if not his visual style.

“I’ve been pretty intellectual in the past,” Tredway said despite his preference for puppetry, doll-like figures and fantasy narratives, regardless of medium. “I almost never let my personal life affect my work. But there have been a lot of changes and intensity recently and I’m seeing less detachment in my work.”

There are 11 large and medium format oil paintings, two series of smaller works including five Cigar Box Creatures and seven Robots, and three videos not for sale. In addition, there is one bizarre three-piece sculptural installation, The Hunt, whose push/pull impact on its audience had the desired effect.

“I desire a more psychological, emotional response from my viewer,” Tredway said.

Several works here are paradoxically pleasing and disturbing, or at least intriguing thematically, and quite in keeping with Lost Ends’ show statement. Especially its assertion that the viewer is thrust into “the story in the middle, without context … every page is the first page …. It is creating a mystery from clues, forgetting to be solved.”

Other than palette, it does seem at first that the paintings in particular have little in common content-wise. Since the viewer is unable initially to even identify the mystery, let alone attempt to solve it, one must conclude that for Tredway, art remains the most mysterious “thing” of all. Something better indulged than explained unless and only in a personal, individual way.

Not surprisingly, art is a bit of a paradox for Tredway. Art, he says, “is everything without function. Art is a non-functional object,” at least in a conventional manner. To demonstrate, he painted over a large finished canvas given to him by fellow artist Jake Gillespie, then made a video of the transformation in stop animation for titled How to Destroy a Jake Gillespie Painting. The video is at least as interesting as the new Untitled painting, if not more so, thus demonstrating art’s elusiveness and unconventionality.

If art is its own reason for being, it’s a reality that only gets more complicated and elusive daily, a lesson that casts a wide net, which Tredway says he learned from his father.

“My father told me that everybody has one piece of the truth, and until you know everyone, well … there are more people living today than ever.”

Despite the quixotic nature of this quest, Tredway continues to add his piece of the puzzle to the conversation in search of the Truth of such mythemes as love, power, revenge and others that reveal the human condition. That makes him more the seeker than seer in spite of the visionary tone that haunts much of his work.

And if his narratives which smack of such stylistic influences as magic realism and fabulism seem deliberately obtuse or fall short of total disclosure, maybe it’s because his art “starts as an argument, then I often try to confound my own argument.” Thus the core of Lost Ends is structured more around engagement than revelation, both for the subject and the viewer, creating the mystery, relishing it, “forgetting to be solved.”

Visually, Tredway’s aesthetic, particularly in his midsize and larger works, features a subdued palette that eschews primary colors in favor of secondary ones with many tonal variations. His figures are doll or childlike, when not puppets or creatures, simple and mostly innocent but increasingly expressive and emotional.

Many figures, including those in Unravel, In the Shadows and Algebra have an “ooh, oh or aha” moment that Tredway challenges or leaves incomplete. In Unravel, a wide-eyed young woman holds a thread attached to something that lies outside the frame, a virtual signature piece for this show and the artist’s vision in general.

The book-laden children of In the Shadows sit around a possible instructor and share that same wide-eyed, lip-pursing gaze of Unravel; but Tredway, as he often does, measures this communal moment via the social commentary of its title with a lone non-white child clearly out of the picture and the loop. His socio-politico conscience carries over to the satire of And That’s When We Knew We Had Made a Terrible Mistake which cleverly comments on a certain pipeline in the Nebraska Sand Hills being ruptured while making castles in the air.

More puzzling is the scenario in the oddly-titled Algebra, with its two children gazing at a dove they apparently released from the chest of a deer or elk they just killed. As with two other works, Sacred Sciences and Geometry, Tredway seems to make the case that art, science and nature are not mutually exclusive but rather interdependent.

Tredway’s two most perplexing allegories remain the personal title piece, Lost Ends and the disturbing Making Things Work. In the former, a beautiful, frightened child-woman flees a burning shed, her hair fluttering across her face in the same direction as the smoke escaping the shed, a detail not to be underestimated. Whatever her conflict, the artist paints the scenario not with realistic detail but through a filter of emotional, gestural mark-making, an indication of his increased involvement in his narratives.

But nothing else perhaps best exhibits Tredway’s darker vision of what it is to be driven as an artist than Making Things Work. In it, a maggoty, childlike figure crawls up a supine swan sporting a human façade, attempting to feed it a piece of “fruit,” all the while defecating as it climbs. Though Tredway says he is that child, it’s not an image of him best known by family, friends and fans of his work. Nevertheless he is known for a satirical, probing sense of humor and it is interesting that he doesn’t spare himself, no matter how you interpret this troubling portrait of the artist.

Tredway simply understands and expresses what poet Dylan Thomas meant when he wrote, “The force that through the green fuse drives the flower / Drives my green age; that blasts the roots of trees / Is my destroyer.” That it can also be an artist’s “destroyer” is the risk they take, another mytheme “waiting to be solved.”