An interdimensional rift has torn through the middle of Omaha, dragging heros and villains out of their comic book universes of Marvel and DC. Predictably, nothing good happens in this situation and in a room full of reporters just trying to get the scoop, one ends up dead.

This is the premise of the current Apollon production entitled “Holy Black Widow, Batman! DC vs. Marvel.” Guests play the role of reporters (which made me a reporter playing a reporter) attending a press conference over the interdimensional rift and all the trouble–earthquakes, for example–it’s causing. While there, an overly enthusiastic reporter named Peter Olson (Jon Roberson) is murdered and the entire room is locked down for questioning. 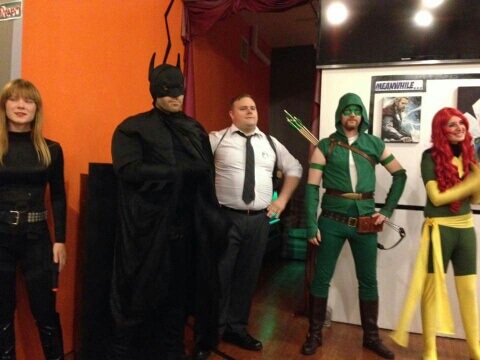 The cast–Emily Hoffman as Black Widow, Johnny Ireland as Green Arrow, Katie Otten as Phoenix, Nick Stuart as Batman and Rick TerKeurst as Harvey Bullock–are as much suspect as you are in this mess. Bullock drags each of the heroes (and several unsuspecting audience members) into an interrogation room for questioning over the course of the night. Meanwhile, guests enjoy specially themed drinks and a three course meal of Deadpool’s Deathstroke Chimichangas, Lobo’s Wolverine Burgers (with the works) and Hulk’s Kryptonite Krunch.

As you might expect from anything involving Marvel and DC, the plot is not as simple as a murder, an investigation and a criminal apprehended. There are in fact, more murders and clues and hijinks waiting before the end of dessert.

“Holy Black Widow, Batman! DC vs. Marvel” (which I am going to abbreviate as HBWB:DCVM for the rest of this article because it’s a fittingly silly acronym for a comic book comedy drama) started out, like all Apollon shows, as just a title. The title is given to the crew, who then scramble to build an idea, script, set, and dinner around it.

HBWB:DCVM is a collaborative effort between 14 artists, including the cast and a collection of artists, writers, choreographers and even chefs. They work together to build the sets, create costumes with the help of sponsor Fairytale Costumes, write the script and even figure out the dinner menu together. It is the first show The Apollon has done using technology to intergrate the show: a flat screen tv broadcasts interrogations happening in the other room, so guests can watch and laugh at things they aren’t seeing for themselves.

The Apollon has been open for two years, serving as a performance space as well as public art gallery. During the course of HBWB:DCVM a series of comic-book themed art pieces are on display for enjoyment or purchase. Apollon creative director Ryan Tewell (who played the very loud, very suspicious host in an obnoxious comic book-themed jacket) says the space was a wreck when they purchased it, complete with rotted floors and a collapsing ceiling. Tewell says they were willing to make it work, however.

“We’d been touring for four years out of Lincoln and being on the road is fun but expensive,” Tewell explains. “Logistics are hard and after a while you want to settle down.”

In addition to the interdimensional rift cracking its way through the floor and ceiling, each table also features a seemingly harmless centerpiece representing a DC or Marvel villain. This included Doc Oc’s sprawling tentacles, Venom’s head bursting forth from the tableclotch spitting black ooze onto the ceiling, Poison Ivy’s carniverous plants and a bouquet of Joker flowers ready to squirt who-knows-what if touched. They were incredibly well-thought out and amusing decorations to emphasize the scene and they made for interesting dinner conversation. 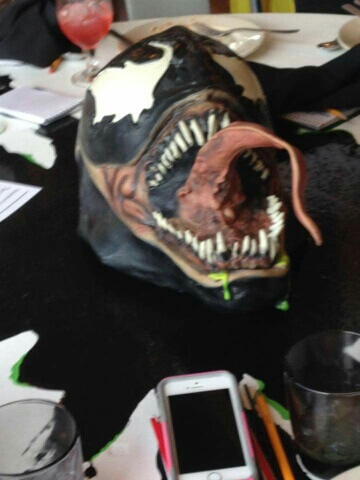 Katie Otten, who plays Pheonix, also directed the show, organizing weekly meetings for over two months to blend the three elements The Apollon prizes: the performers, the witness and the shared experience between them. She says that she is grateful to The Apollon for helping her build experience in other facets of the theater business than just acting, such as script writing. Otten got her acting start in eighth grade as a member of the chorus during “Joseph and the Amazing Technicolor Dreamcoat” and has been hooked ever since.

Nick Stuart plays a Batman with a comical medical condition causing memory lapse and his stereotypical Batman growl to come and go at inopportune and hilarious times. Stuart, who started acting a year ago and frequents the Omaha Community Playhouse, struggles with autism. To his credit, this is nowhere to be seen in his acting, cleverly covering his faltering with coughing fits as Batman lapses in and out of his gruff voice. Stuart credits his becoming an actor to his adoration of Dwayne “Rock” Johnson, whom he dreams of meeting and working with.

The script relies heavily on Rick TerKeurst’s knowledge of all things nerdy, who jokes his other contributions were limited to set building and owning a pickup truck to haul things. The script is easy to follow if you are a comic book novice who knows only big names but there were some witty gems hidden that made this comic book enthusiast laugh a little too loudly. (Examples include “a calendar, you say? That couldn’t point to someone like, maybe, Calendar Man?” and Pheonix asking Black Widow why she provokes everyone she meets, to which Black Widow defended herself with “hey, I don’t get as mch screen time as the other Avengers!”)

Johnny Ireland (and yes, that is his real name) played the Green Arrow as well as contributed his costuming specialty to bring the heroes to life, especially Black Widow and Batman. He thanked The Apollon for the opportunity to be part of the art and performance there. He added that the crew got together very well, saying that the thing that took longest to decide was the menu.

“It took us several weeks, actually,” Ireland laughs. “None of us could come up with any ideas and then we all started coming up with a bunch. I’m just thrilled to be part of that in depth level of creativity. The Apollon has this intent to get creative people together and people’s ideas riffing off of each other get bigger than they ever would have on their own.” 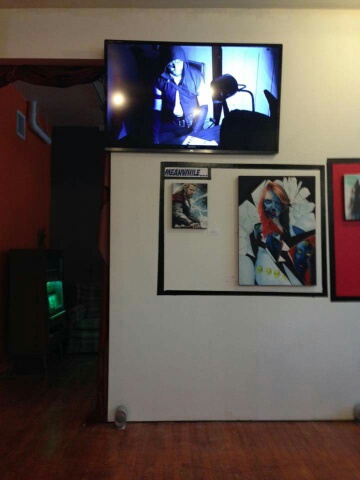 Not only does The Apollon offer a good environment for actors new and veteran to experiment with different themes but they also pay their performers, something that is shamefully absent in some other theater venues. They typically write eight to 10 shows in a year. There are three shows left this year:

August/September: We Love the 90s!

The Apollon has two more showings of HBWB:DCVM this Friday, June 26 and Saturday, June 27. The Saturday show is nearly sold out and Friday is not far behind, however, so if you are interested you should act fast. Tickets are $35, which includes a three course dinner. Student/TAG discounts are available. Doors open at 7:00 p.m. and the show kicks off at 7:30 p.m. It’s an all-ages show.

Check out the facebook event, website, or visit the gallery yourself at 1801 Vinton St. Gallery hours are Wednesday through Saturday, 10:00 a.m. through 6:00 p.m.